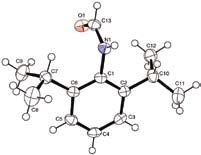 N-(2,6-Diisopropylphenyl)formamide exists as two carbon–nitrogen bond rotomers in solution. Upon crystallization, however, the solid-state structure shows exclusive formation of the cisoidal rotomer. The compound exhibits a non-planar structure in which the 2,6-diisopropylphenyl ring is tilted at a dihedral angle of 77.4(1)° with respect to the formamide moiety. This is the largest dihedral angle known among structurally characterized formamides and is attributed to the presence of the bulky isopropyl groups on the ortho positions of the phenyl ring, which increases torsional strain between the two planes defining the dihedral angle.
J.M. Chitanda, J.W. Quail and S.R. Foley