Sometimes Nature provides us with perfect gifts. What would synchrotron radiation be without the perfect silicon crystals that are so valuable as monochromators, polarizers, and analysers in most beamlines? Nature offers the physical basis to grow perfect silicon crystals, engineers in the semiconductor industry have learnt to master the process of producing huge perfect monocrystalline ingots and the makers of synchrotron X-ray optics are capable of transforming the material into optical elements for X-ray beam conditioning. There is a further gift from Nature: at 125 K the thermal expansion of silicon is zero while the thermal conductivity increases threefold with respect to room temperature. This property is extremely valuable because it decreases the thermal deformation generated when cooling silicon crystal optics exposed to undulator or wiggler beams that have heat fluxes comparable to that at the sun’s surface. At room temperature the quality of the X-ray beams emerging from modern storage rings would be greatly deteriorated. Nowadays, most high heat load monochromators in beamlines at third-generation storage ring sources are cryocooled. The history of cryogenically cooled silicon monochromators has been described by Bilderback et al. (2000).

Because sources tend to become stronger and fourth-generation sources are under discussion, the question arises as to how far we can go with power loading before cryogenic cooling fails. Another important question is how accurately can the thermo-mechanical response and the diffraction properties of the cooled crystals be predicted? The modelling exercise starts with finite element analysis (FEA), in which the piece of material, heated on one side and cooled on the other, is subdivided into many small volumes (the 'mesh'). The computer calculates the temperature distribution and the overall shape of this piece by adding up the contributions of all the small, more or less expanding elements. FEA has been widely tested and gives very reliable results — if correctly applied. The latter sine qua non condition has been a challenge for some time. In most of the extensive work done over the past many years it was assumed that the radiation is absorbed at the surface or very close to it. The validity of the assumption depends on the spectral distribution of the incoming beam and on the Bragg angle. 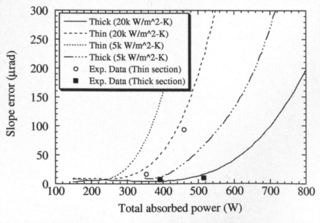 Comparison of thick-section and thin-section thermal distortions.
The work by Tajiri et al. has the great merit of having studied the thermal deformation taking into account the depth distribution of the absorbed power. A very detailed FEA was applied to a directly cooled crystal developed at the Advanced Photon Source (Argonne, IL, USA). It was clearly shown that the penetration depth effect must be considered. The crystal investigated had a thin and a thick section. The thin section was prepared because it was believed that less power absorption would lead to less thermal deformation. Both the calculations and the experimental data for silicon 111 and 8 keV showed that the opposite was true. This can be explained by the strong nonlinearity of the cryogenic cooling process. The cooling of the thin section was much less efficient than in the thick section so that the thin part of the crystal heated up far above the ideal temperature of 125 K and thus thermal deformation was much greater. For the thick section the thermal slope error (see figure), i.e., the deviation from flatness averaged across the beam footprint, stayed below about 10 μrad up to a total absorbed power of 500 W in a beam cross-section of 2 x 3 mm2. For higher heat load, the slope error suddenly increased — a runaway effect that can create strong instabilities. It also reveals that a heat exchange coefficient measuring the efficiency of the heat transfer from liquid nitrogen to silicon of 20 kW m–2 K–1 was appropriate. Although more experimental data are needed for full confirmation, questions about the limits and the accuracy of the predictions mentioned above may soon be answered.

If future machines such as the 'ultimate storage ring' (Ropert, 2001) generate still higher X-ray power, at least three avenues to solve the problem can be envisaged: spreading the beam on the surface of the cryocooled silicon crystal by asymmetric and inclined diffraction geometries, using isotopically pure silicon that has much enhanced thermal conductivity at even lower temperatures, or using single-crystal diamonds that have ultimate thermal performance and are already in use on several beamlines. All these developments will require further studies of the kind described by Tajiri and co-workers.