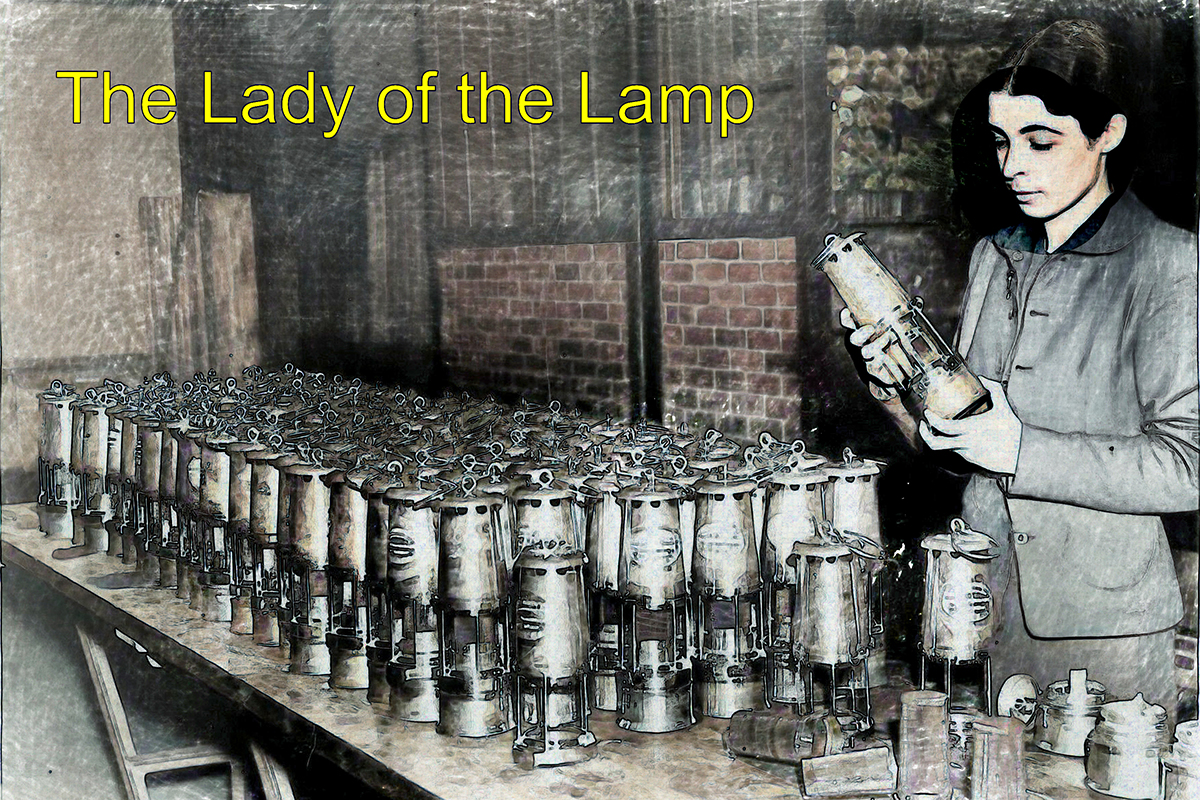 In 1976, I moved from Cambridge to Oxford, taking all the records, crystal models and equipment of the Cambridge Crystallography Laboratory. This had originally been set up when W. L. Bragg moved from Manchester to Cambridge in 1937. I joined the lab in 1969 to work under Helen Megaw, and the head of the laboratory was William Hodge Taylor (WHT). Bragg had departed from Cambridge in 1953 to go to the Royal Institution in London. 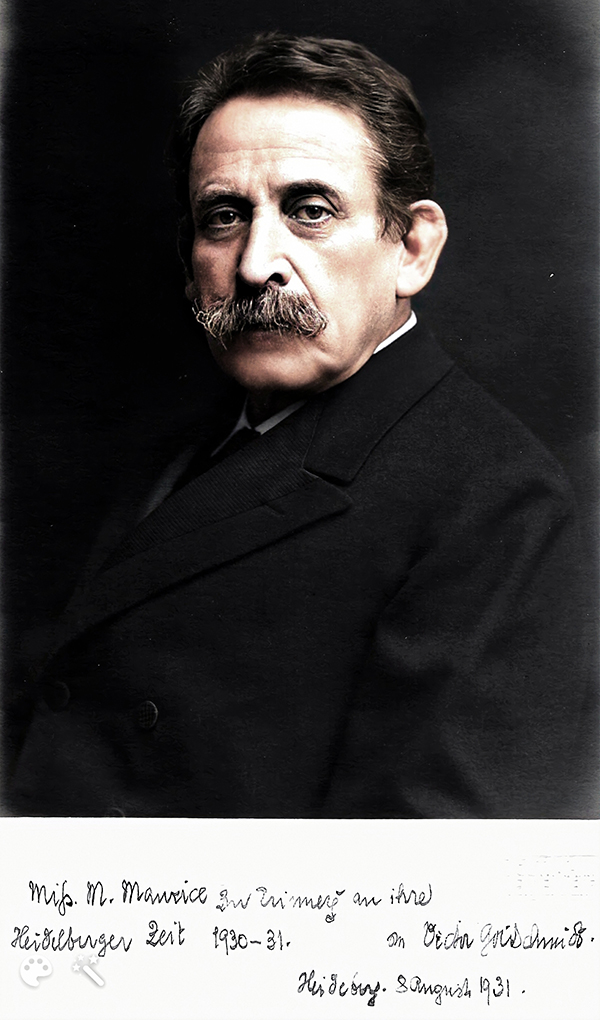 Now, one of the items (Fig. 1) that I brought with me is a photograph of the mineralogist/crystallographer Victor Mordechai Goldschmidt (1853–1933) [1]. At the bottom of the photo is an inscription written in German, saying "Miss M. Maurice in memory of your time in Heidelberg 1930–31". It is signed and dated Heidelberg, 8 August 1931. I have been wondering for a long time about this photo. Why was it in the Cavendish Laboratory, and whose office did it come from? My guess is that it came from Helen Megaw, but it could have been from WHT, who had kept items from Bragg's office after he left Cambridge, or possibly from Bragg himself. And who was Miss Maurice? What was her connection to the Crystallography Laboratory?

I eventually discovered that she was Monica Maurice (see her Wikipedia entry: https://en.wikipedia.org/wiki/Monica_Maurice), see Fig. 2. 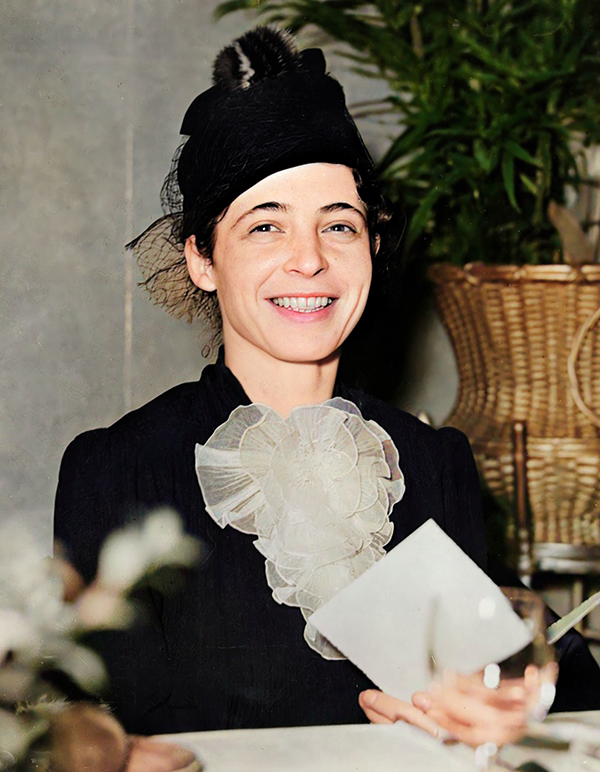 Figure 2. Monica Maurice (copyright the Institute of Engineering and Technology and the Women’s Engineering Society, colourised by AMG).

Now, she was a really fascinating woman, an aerobatic pilot (a friend of Amy Johnson, for instance), a racing car enthusiast, and obviously very talented and unusual for her time. She was also well known as an engineer. As a pilot myself, I would have loved to have been able to meet her and gossip about aircraft. When Monica was married, she chose a bright red wedding dress which caused quite a stir and even made the national news: the dress is now at the Victoria and Albert Museum in London. According to her Wikipedia entry: In 1931, she was apprenticed as an engineer in Germany with the former parent company, Friemann and Wolf, then the world's largest and most celebrated firm of mine lamp makers. She trained in the drawing office, laboratory, machine shops and foundry, among other departments. For practical experience, she also visited the coal mines of Westphalia. She made several other visits to Germany throughout the 1930s, and on one occasion, she wandered into a restricted zone and saw what she thought was a guidance system. This she reported to the British authorities on her return, but they were not interested. At the outbreak of war, though, she was summoned to London for a three-day debriefing. All this experience, her knowledge of technical German, and her familiarity with many of the industrial sites, proved invaluable. Monica Maurice was known in Yorkshire as the "Lady of the Lamp" to the coal miners (see Fig. 3). The company where she was a managing director, the Wolf Safety Lamp Co. Ltd, still exists today (https://www.wolfsafety.com/history). I am grateful to Helen Close of the Women’s Engineering Sociey for a link to an interesting video in which Monica appears in old age: see https://www.youtube.com/watch?v=SRMPy2BSEP4. 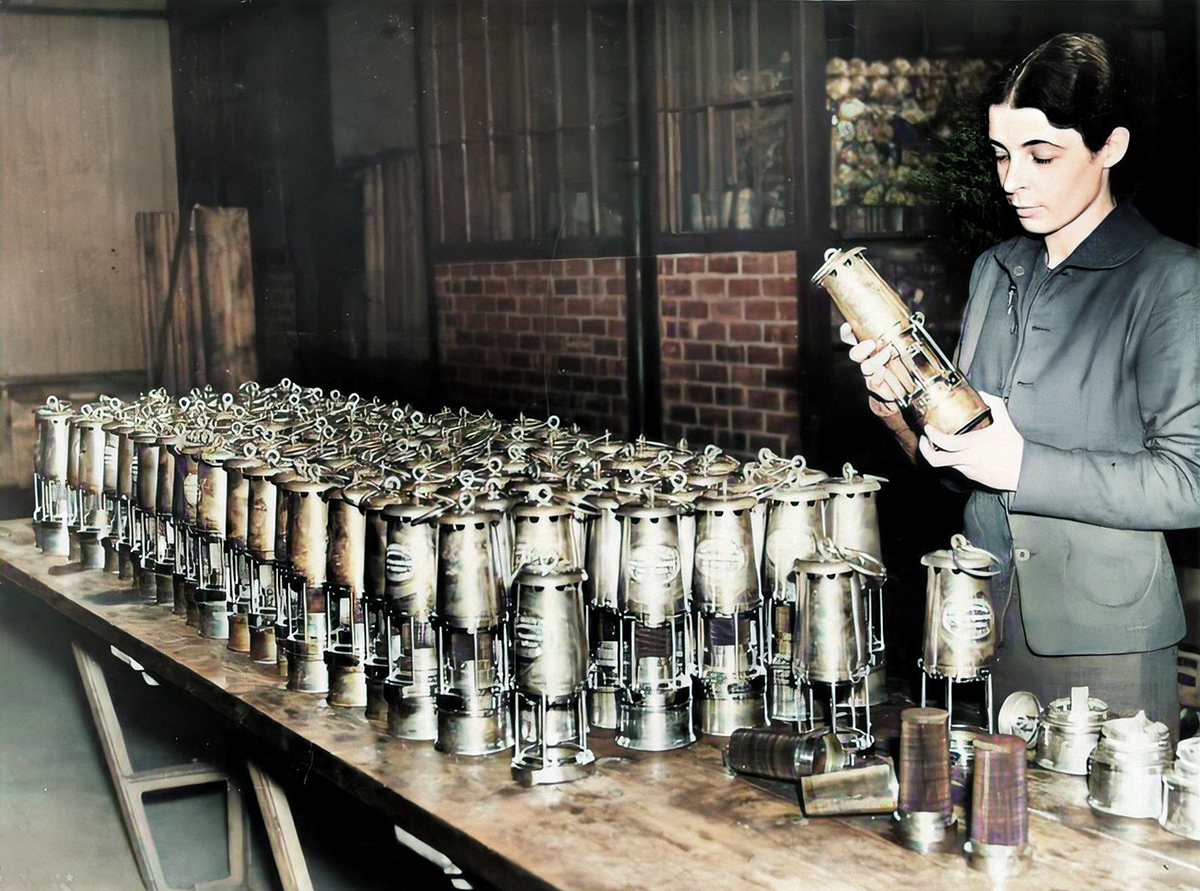 Figure 3. Monica Maurice, the Lady of the Lamp, in 1939 (photograph by permission of her son, John Jackson; image colourised by AMG).

In 2013, when we were planning the Two Braggs Exhibition at Warwick University (www.amg122.com/twobraggs/), I received a photograph from Robin Marshall in Manchester who was researching the history of the Physics Department. The photograph (Fig. 4), which he eventually published in his book Three Centuries of Manchester Physics: Volume 3 1907-1937, is of a department outing to the Blue John mine near Castleton in Derbyshire in 1929. Blue John is a particularly rare variety of the mineral fluorite, CaF2. I can strongly recommend a visit to the mine if you ever have a chance. The photo was probably taken by Bragg himself, as his wife is there in the group but he is not. It shows the members and visitors of Bragg's group in which everyone is named. Many famous names will be well known to crystallographers of a certain age. To my surprise, I found among a group of women, including Lady Bragg, the name M. Maurice! So clearly, she had some connection with Bragg, though it is not clear what that connection was. It may be because of her association with mines, but the earlier link to Goldschmidt suggests to me that it was something else. Fig. 5 shows the site today. 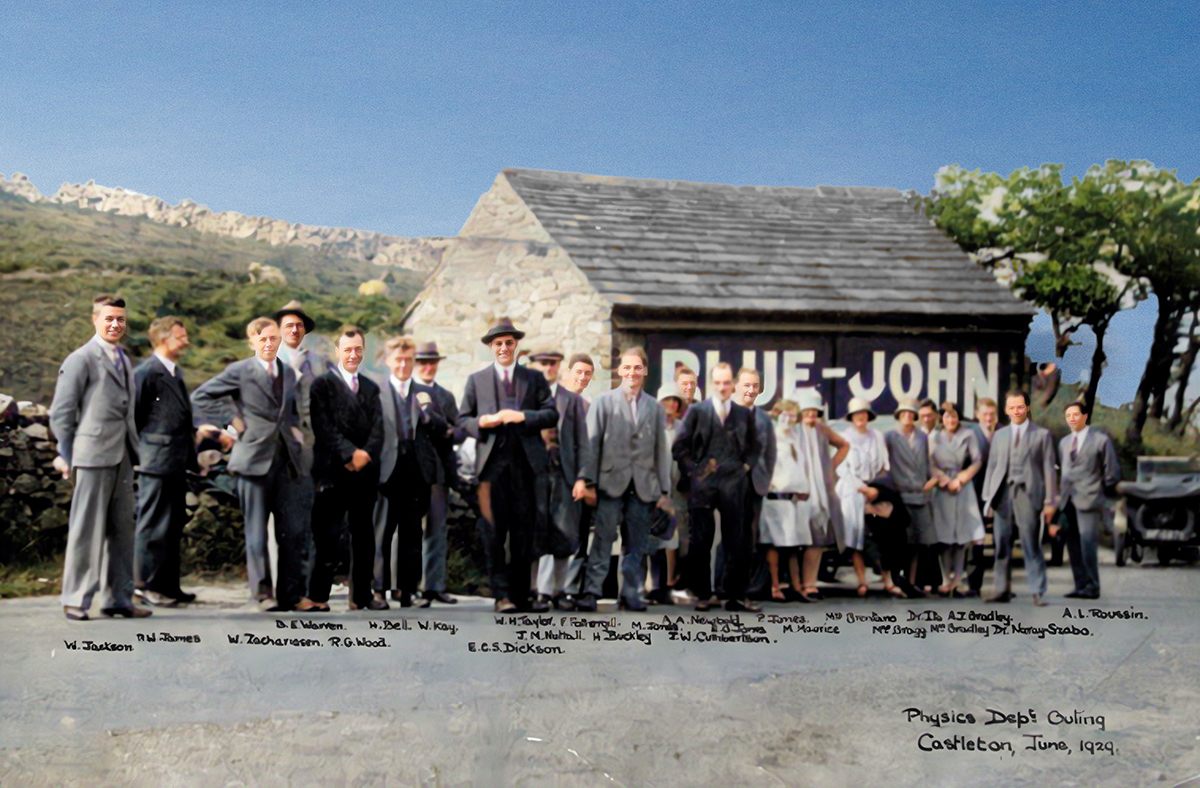 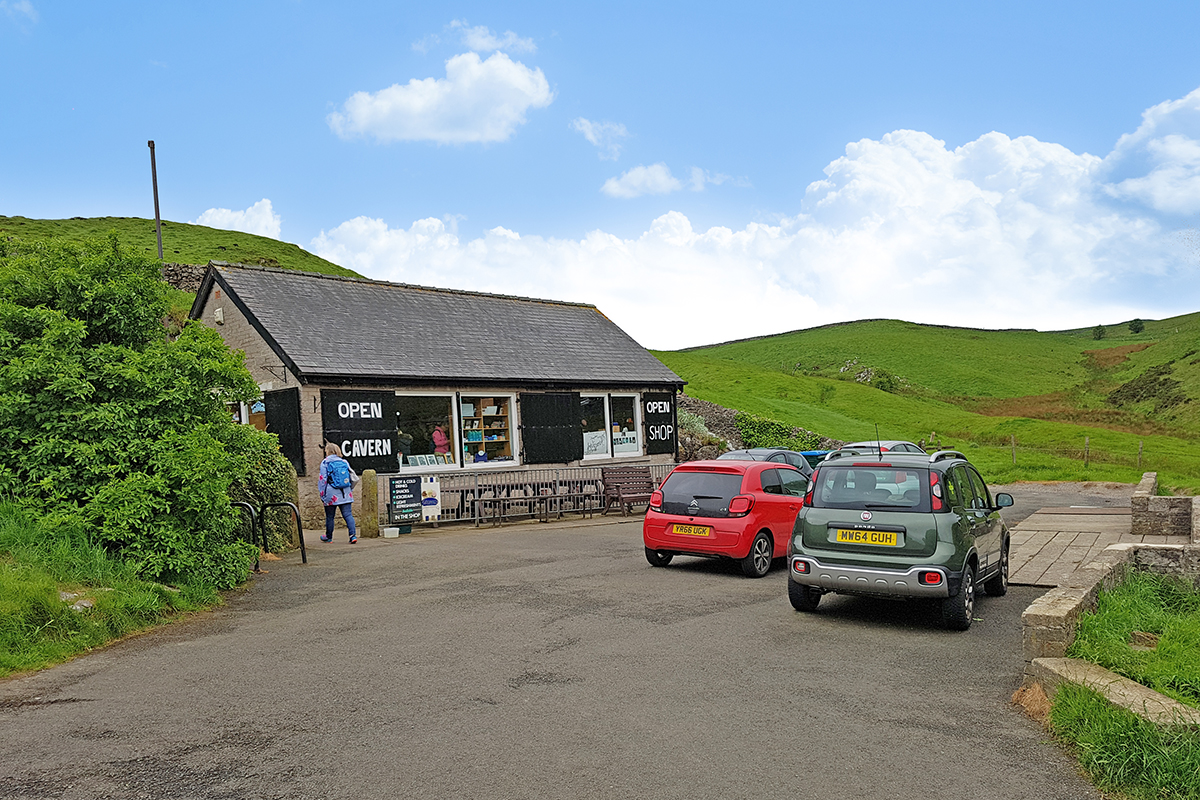 Figure 5. Entrance to the Blue John mine today.

When I was at the Cavendish, I recall being told by someone that Helen Megaw had been part of a team of scientists who had been sent to Germany just after World War II. She believed that she was sent there to visit the scientific research laboratories to help the German scientists recover from the terrible events of the war. But, I was also told that she had not realised that the mission was actually more about appropriating valuable equipment and knowledge to bring back to Britain. I think she would not have approved. Indeed, I have in my possession a beautiful German balance which I was told came from that time. This is where things become interesting. After the war in 1945, an organization known as BIOS (British Intelligence Objectives Sub-Committee) was established by the UK government under the chairmanship of the chemist R. P. Linstead (1902–1966) for the purpose of coordinating British scientific and technical exploitation efforts. According to Charlie Hall in his book British Exploitation of German Science and Technology, 1943-1949, published by Routledge, Monica Maurice was part of a BIOS mission to Germany in April–May 1947. So I can guess that Helen Megaw was also a member of that same BIOS team, and it is then likely that they would have met. I can well imagine that Monica Maurice, knowing that Helen was a crystallographer and mineralogist (and particularly well known at the time for her work on the structure of the perovskite, barium titanate), might have given Helen the Goldschmidt photograph. Alternatively, Monica may have given the photograph on another occasion directly to Bragg, for we have seen that she was already in touch with him many years earlier.

So there the mystery remains. I would love to know the true connection between Monica and the crystallographers. If anyone out there can add to this story, please let me know.