The 7th European Charge Density Meeting was held from June 26 to July 1, 2016 at the Centre of New Technologies of the U. of Warsaw, Poland, and was attended by 114 participants from 20 countries including Germany, UK, France, Slovakia, Australia, Denmark, Russia, USA, Italy, Switzerland, Belgium, India, Brazil, Slovenia, Taiwan, Spain, Czech Republic and Poland. The meeting was organized by a Local Organising Committee chaired by Krzysztof Woniak and Paulina M. Dominiak. Institutionally, ECDM7 was hosted by the U. of Warsaw (Dept. of Chemistry), the Polish Academy of Sciences (Crystallographic Committee) and the Polish Crystallographic Assn. The program included 22 invited lectures, 27 oral communications including ones selected from submitted abstracts and there were two poster sessions.

The Monday morning session was focused on potential errors in experimental and theoretical approaches with an excellent opening lecture by Julian Henn ('About Fit Quality Indicators') and oral communications by the present Laureate of the ECA M. Perutz Prize, Václav Petříček ('Diffraction data analysis in Jana2006'), and Regine Herbst-Irmer ('Empirical correction for resolution- and temperature-dependent errors caused by factors such as thermal diffuse scattering'). Then, Krzysztof Wozniak presented a lecture entitled: 'A century after the Braggs: on precision and accuracy of X-ray results'. The session was completed by Matthias Gutmann with his invited lecture on 'Aspects of single-crystal neutron diffraction'. The other sessions included many excellent invited lectures, among others: 'On hydrogen-atom treatment in high-quality single-crystal structure analysis' by Birger Dittrich, 'Is relativity the hammer in charge density of heavy elements and their compounds? How heavy is the hammer - how heavy is heavy metal?' by Lukasz Bucinsky, 'A tale of two densities' by Dylan Jayatilaka, 'Concerning measurement errors in synchrotron X-ray charge density studies' by John Helliwell (the 8th ECA Max Perutz Prize Laureate), 'Insights into single-molecule magnetism from charge and spin density studies' by Jacob Overgaard, 'Reproducibility in biomedical sciences' by Wladek Minor, 'Using QM methods to refine biological structure' by Kenneth M. Merz Jr, 'GEM, a force field based on density fitting for scalable molecular dynamics simulations' by Jean-Philip Piquemal, 'Information entropy towards atoms in molecules' by Patrick Bultinck, 'On attraction of electrons' by Lucjan Piela, 'Some emergent scalar and vector fields in Quantum Chemical Topology' by Angel Pendas, 'When experimental charge and spin density data challenge ab initio and DFT calculations' by Claude Lecomte, and  'Locality of intermolecular interactions in organic crystals' by Tonglei Li.

The last day of ECDM7 was devoted to cryo-electron microscopy. There were three excellent lectures delivered by Wolfgang Baumeister: 'Electronic cryomicroscopy: from molecules to cells'; by Christopher J. Russo: 'Approaching the physical limits of electron cryomicroscopy for structure determination' and by Philip Nakashima: 'Towards the measurement of bonding in and around inhomogeneities in nano-composite materials'. 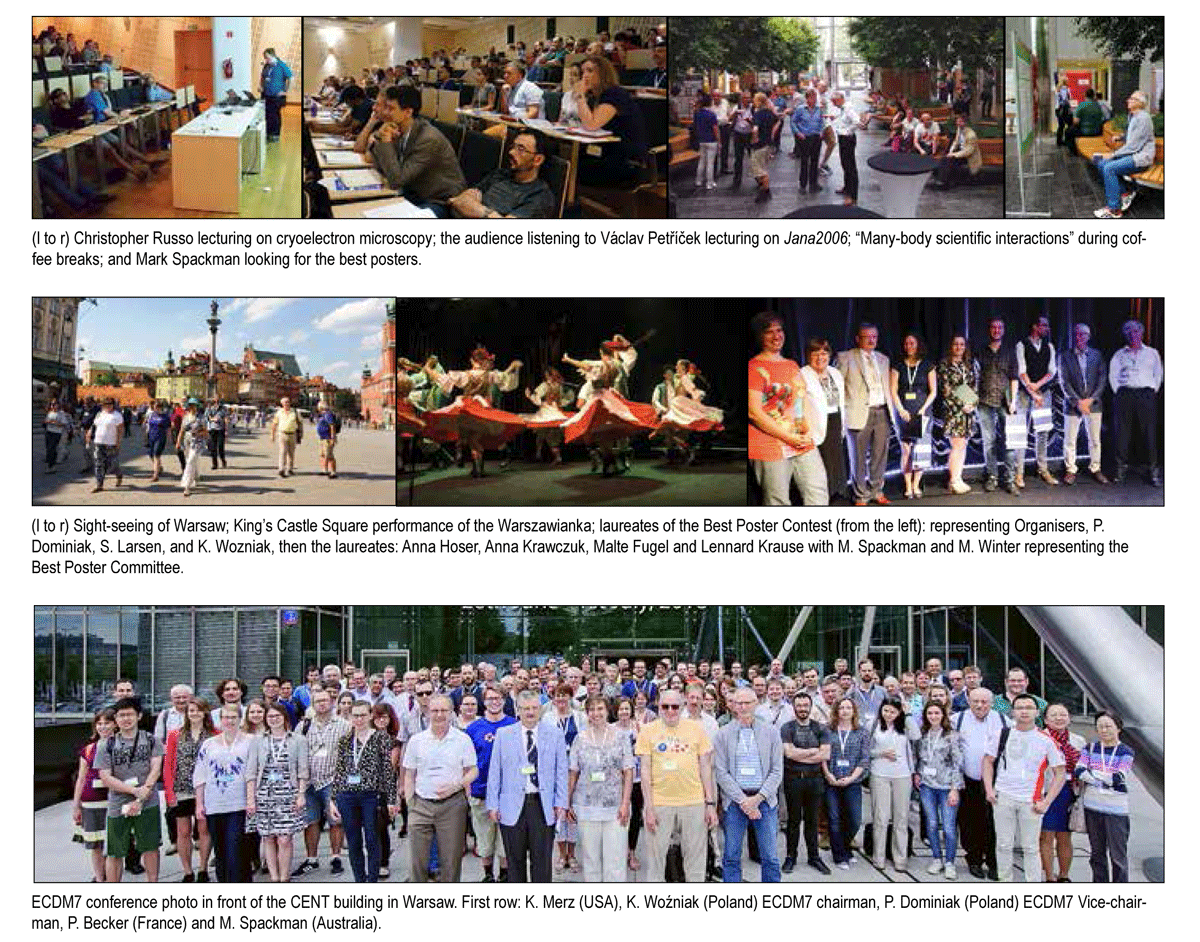 The social program included sightseeing of Warsaw (Wednesday afternoon) and on Thursday evening a conference concert and dinner. The concert took place at one of the Warsaw theatres called in Polish 'Kamienica' where, firstly, there was a performance of the Folk Song and Dance Ensemble of Warsaw U. named 'Warszawianka' which presented its dance, vocal and instrumental repertoire. Then a conference dinner, during which Mark Spackman announced the winners of the best poster contest. As the best poster prizes were co-sponsored by IUCr, Sine Larsen presented a short presentation on the aims and activities of IUCr. The newly established Stewart Prize went to Anna A. Hoser, Ioana Sovago and Anders Ø. Madsen for the poster entitled: 'Aspirin polymorphs revisited'. The Best Poster Prize was awarded to Malte Fugel, Florian Kleemiß, Lorraine Andrade Malaspina and Rumpa Pal for their poster 'Investigation of the hypervalency in polyoxoanions via theoretical and experimental charge density studies'. The second Best Poster Prize was presented to Lennard Krause, Regine Herbst-Irmer and Dietmar Stalke for their poster 'Validation of charge density refinement strategies'. Finally, the Rigaku Oxford Diffraction Prize went to Anna Krawczuk and Piero Macchi for their poster 'PolaBer - distributed atomic polarizabilities approach'.

ECDM7 has clearly shown that modern crystallography goes far beyond routine applications. In fact there is plenty to be done in this field. Being concise, ECDM7 has stressed that there is plenty of room to improve the quality of the final crystallographic results when diffraction data collection is better planned, collected data are processed in a new way and data are refined using more advanced models of electron density than those routinely applied.

Thank you to all the sponsors including: the U. of Warsaw (in particular the Dept. of Chemistry), the Polish Academy of Sciences (Crystallographic Committee), the Polish Crystallographic Assn, the IUCr, the ECA, Rigaku Oxford Diffraction, Bruker, Oxford Cryosystem, STOE, AXO, DECTRIS and CENT, for all their support.

Now, we look forward to ECDM8 in Göttingen, Germany.