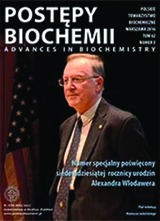 This year, Alexander Wlodawer, a renowned figure in structural biology, is celebrating his 70th Birthday. Alex graduated from the U. of Warsaw, and received his PhD from UCLA. Since 1987 he has directed a protein crystallography laboratory at the National Cancer Inst. in Frederick, MD. Alex maintains very close ties with Polish science, supporting scientists from and in Poland, engaging in collaborative research, and participating in scientific panels. In 2005 he was elected a foreign member of the Polish Academy of Sciences. Alex is famous for contributions to the structural biology of the HIV virus and of other biomedical targets. He is a dedicated mentor and promoter of science, and an exemplar of the highest standards in scientific conduct and research.

A Special Issue of the Polish Biochemical Society Quarterly, Postpy Biochemii (www.postepybiochemii.pl/#Archiwum?./cont/3_2016.html), dedicated to Alexander Wlodawer, has contributions from his many coworkers, mentees and friends.