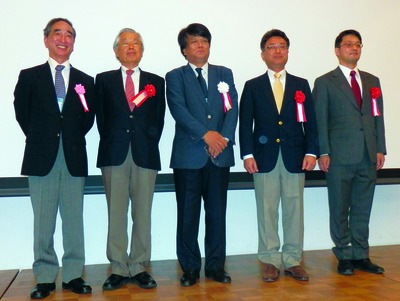 The recipients of the Honorary Membership and the 2015 CrSJ Awards with the President of CrSJ (from left): M. Sakata, S. Iijima, Miki (President), H. Ago and M. Suga. 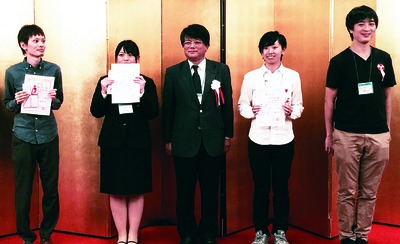 The poster Awardees and the President of CrSJ (from left): Hirabayashi, Nishiyama, Miki (President), Tanaka and Shihoya.

Over 363 crystallographers participated in the 2015 annual meeting and the general assembly of CrSJ held at the Osaka Prefecture U., October 17-18. The meeting featured 50 oral and 129 poster presentations covering all aspects of crystallography, three award lectures, three microsymposia (a total of 14 invited talks), a special lecture promoting gender equality, two luncheon seminars, and industrial exhibitions from 13 companies/organizations.

At the CrSJ Awards Ceremony, the S. Nishikawa Award was presented to S. Iijima (Meijo U.), the Research Award was given to H. Ago (RIKEN), and the Young Crystallographer Award went to M. Suga (Okayama U.). At the general assembly, an Honorary Membership was awarded to M. Sakata (SPring-8).

Five young scientists were honored with the Poster Awards. They are: D. Urushihara (Nagoya Inst. Tech.), M. Nishiyama (U. Hyogo), W. Shihoya (Nagoya U.), K. Hirabayashi (Osaka U.) and A. Tanaka (Osaka City U.).

A full program of the meeting can be viewed at the CrSJ website www.crsj.jp/activity/annualMeetings/nenkai2015. The chair of the organization committee was Y. Kubota (Osaka Pref. U.) and the program committee was chaired by N. Kamiya (Osaka City U.).