The IUCr-UNESCO Bruker OpenLab Albania was held at the Polytechnic U. of Tirana (PUT) from May 30 to June 3, 2016. More than 90 participants attended the Opening Ceremony, which was held in the main auditorium of PUT and hosted by Andrea Maliqari, Rector of PUT, and Bujar Dida from the Faculty of Mathematical Engineering and Physical Engineering (FIMIF-PUT), Local Chair of the OpenLab, in the presence of invited attachés from the embassies of participating countries; delegates from the Ministry of Education and Sport and the U. of Tirana School of Medicine; and deans, professors, lecturers and students from public and private universities in Albania, Kosovo and Macedonia. Opening speeches were given by the just-elected Rector of PUT, Andrea Maliqari, and his predecessor, Jorgo Kacani. A special greeting was delivered via the internet by Alessia Bacchi, President of the European Crystallographic Association (ECA), and this was followed by welcome messages from Dritan Siliqi [Institute of Crystallography (IC)-CNR, Bari, Italy], co-Chair of the OpenLab, Bruce Noll (Bruker) and Michele Zema (IUCr), who also presented the Opening Lecture: 'Crystallography and society: the contribution of the IUCr to the development of scientific education, research and infrastructure'.

The five-day programme at the FIMIF-PUT was attended by over 50 students and organized in lectures, tutorials and lab sessions. It covered the basics of crystallography and diffraction theory, as well as some advanced applications. An X2S portable single-crystal diffractometer was provided by Bruker for the lab sessions. In fact, the diffractometer is still operational at the FIMIF-PUT and other workshops and schools are being planned for 2017. The availability of this instrument is expected to also facilitate the development of research activities in crystallography in Albania and neighbouring countries.

Tutorial and lab sessions on single-crystal X-ray diffraction, from crystal selection and mounting to data reduction and analysis, were held by Bruce Noll with the assistance of Michele Zema, by making use of Bruker instrumentation and software. The section on single-crystal diffraction was concluded by an interactive lecture with Q&A session by Michele Zema, who recapped all about single-crystal XRD analysis. Corrado Cuocci (IC-CNR, Bari, Italy), Dritan Siliqi and Francesco Capitelli (ICCNR, Rome, Italy) were in charge of all the tutorials about the use and applications of X-ray powder diffraction, which covered the following topics: 'Phase identification and qualitative phase analysis', 'Structure determination' and 'Crystallography for biology and medicine'.

The participants were able to mix during the lunch breaks and further social activities were encouraged in the late afternoons. Certificates were awarded to all participants at the closing ceremony by Bujar Dida, Dritan Siliqi, Michele Zema and Gervais Chapuis. 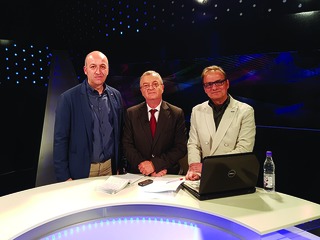 The participants were very enthusiastic about the OpenLab, which attracted much interest not only from Tirana's academic circles but also from the media. Michele Zema and Dritan Siliqi were invited to appear on a well-known talk show on national TV to explain the importance of crystallography and its wide range of practical applications. 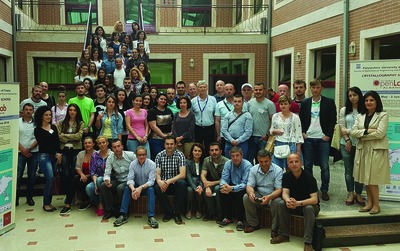 The IUCr-UNESCO Bruker OpenLab Albania also represented a fundamental step in the process for the establishment of the Association of Albanian Crystallographers (AAC), which has now formally been founded and includes crystallographers from both Albania and Kosovo. The OpenLab followed the success of events organized in Albania during IYCr2014, namely the International Conference 'New Frontiers of Nanomaterial Technologies for Applications in Biology and Medicine' and the 1st Workshop on Crystallography, held in conjunction with the 20th Congress of the Carpathian-Balkan Geological Association. At that time, the local community of crystallographers, with Dritan Siliqi and Michele Zema as facilitators, formed the OPAL (Organization for the Promotion of Crystallography in Albania) working group, which was then extended thanks to the participation of crystallographers from Kosovo, and finally converged into the AAC. The AAC is now a member of the ECA and has applied for membership of the IUCr.

The idea of organizing this activity was then to further disseminate and raise awareness about the importance of crystallography, and highlight the fact that Albania and Kosovo would definitely benefit from a proper crystallography education at the academic level. In conclusion, the OpenLab Albania encouraged close cooperation in the South-East Europe and Balkan region, provided advanced knowledge and technology, and made the public aware of the importance of studying and advancing crystallography, because it matters!