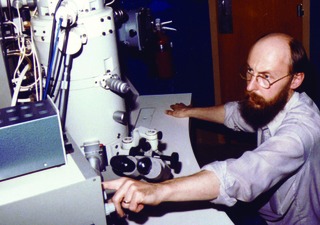 Douglas Dorset passed away on December 8, 2016. He was born in southeastern Pennsylvania on August 29, 1942. He attended Juniata College, majoring in Chemistry, and received his PhD degree in Biophysics from the U. of Maryland in 1971 with Albert Hybl. He joined Donald Parson's electron crystallography laboratory at Roswell Park Cancer Institute that year and in 1973 moved to the Medical Foundation of Buffalo - now the Hauptman Woodward Medical Research Institute - where he headed the Electron Diffraction Department and did the fundamental work for which he is best known. Douglas worked on challenging electron beam-sensitive materials that required strong experimental skills to record representative patterns, and specialized sample preparation methods.

Douglas moved to ExxonMobil Research and Engineering Company in 2000, investigating the structure of wax crystals and how these change in the presence of modifiers. His research encompassed new methods (e.g. use of maximum entropy techniques with Chris Gilmore) and an array of crystallographic studies on zeolites, polyolefins and other materials. While at ExxonMobil, Douglas quickly assumed a leadership role in helping to establish a new materials discovery capability. This included many new catalytic materials that showed promise in separations and catalysis applications, and led to many patents in the area.

In the face of those who said that electron diffraction data could not yield quantitative results, he argued that the problem of dynamical scattering could be overcome and that electron diffraction data could yield ab initio structure determinations. He was responsible for bringing the work on electron crystallography of Vainshtein and Zvyagin in Moscow to the attention of a larger western audience. He developed techniques to overcome the problems of the missing cone of data, dynamical scattering, radiation damage and sample problems. His breadth of applications included polymers, waxes, zeolites, fibers, cholesterol derivatives, fullerenes, phthalocyanines, solid solutions of paraffins and proteins at low resolution. He was the first to carry out an ab initio solution of a membrane protein structure using electron diffraction data at 6 Å resolution.

In 1995 he published 'Structural Electron Crystallography', the first definitive text on the subject and still an invaluable source. This book, together with his pioneering work in electron crystallography, laid the foundation for an explosion of the field in the twenty-first century. Many of his methods are the basis for powerful methods of solving the structure of crystals which are not readily amenable to study using X-ray diffraction methods, employing techniques such as precession electron diffraction, automated diffraction tomography and methods for solving surface structures.

Douglas received the A. L. Patterson Award in 2002 from the American Crystallographic Association. He was within the top 1% of most-cited authors in the chemical literature, world-wide, 1981-1997. He was a member of the IUCr Commission on Electron Diffraction (now Electron Crystallography) 1993-2002 (Chair 1999-2003), and a Co-Editor of Acta Crystallographica A 1999-2011. He was on the Editorial Board of the Journal of Electron Microscopy Technique, 1988-2010, and Associate Editor, Microscopy Society of America Bulletin, 1992-1994.

Apart from his interest in science, he was also very interested in politics, environmental causes, culture, history and languages. Discussions with Douglas would start out on a scientific note, then end up encompassing music, languages, typefaces, geography and a multitude of other subjects. Music was important in his life, not the least because his son Erik is a professional violinist. He was also an avid collector of old books. He taught himself Dutch to better understand the medieval printing techniques, and despite his illness over several years had nearly completed a book on the Dutch printing methods.

His wife Bonnie was at his side always. Bonnie was a generous host for those who had come from various parts of the world to work with Douglas. We will forever remember his scientific integrity, knowledge and humor. Douglas is survived by his beloved wife of 49 years, his son, and two grandchildren.