Comment on molybdenum polyoxo clusters: from the 'Blues' to the 'Reds' 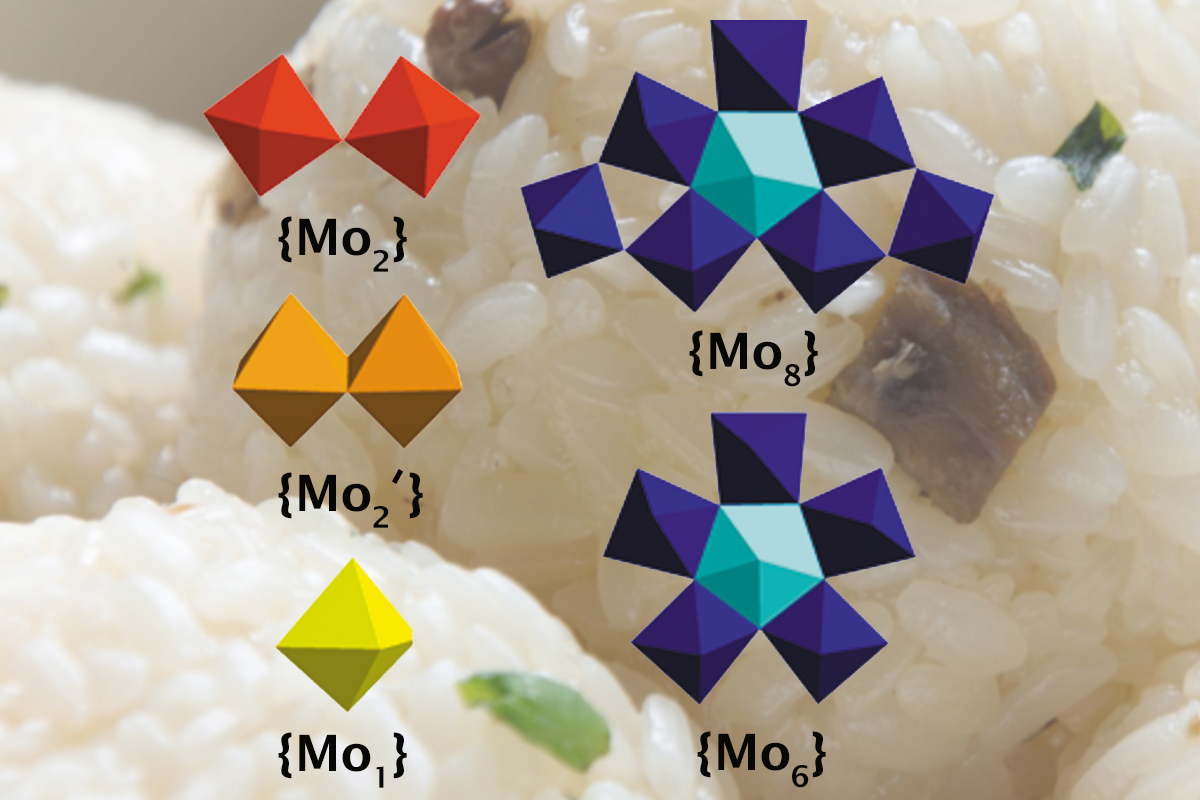 Molybdenum ‘Blues’, ‘Browns’ and the recently discovered ‘Reds’ are unquestionably some of the most impressive nanoscale architectures in polyoxometalate (POM) chemistry (Müller & Gouzerh, 2012; Lin et al., 2020). These three polyoxomolybdate classes, with the general formula [XaYbHcMoVIxMoVyOz(H2O)v]n– (a and b = number of organic ligands and heteroelements, respectively; c = degree of protonation; x and y = number of MoVI and reduced MoV centres, respectively) are classified as gigantic mixed-valence (MoV/VI) polyoxomolybdate clusters with various topologies ranging from ‘wheels’ to ‘balls’, ‘cages’ and the ‘blue lemon’, known to be the largest inorganic molecule to date (Lin et al., 2020; Müller & Gouzerh, 2012). While the subclasses of molybdenum ‘Blues’, ‘Browns’ and ‘Reds’ have the reduction of an acidified solution containing orthomolybdate ([MoO4]2–) or heptamolybdate (Hx[Mo7O24](6–x)–) in common, they can be distinguished by three characteristic features. Firstly, ‘Blues’, ‘Browns’ and ‘Reds’ exhibit distinct degrees of reduction, with the ‘Blues’ being the least (∼18%) and the ‘Reds’ the most (up to ∼81%) reduced representatives (Ribó et al., 2022). 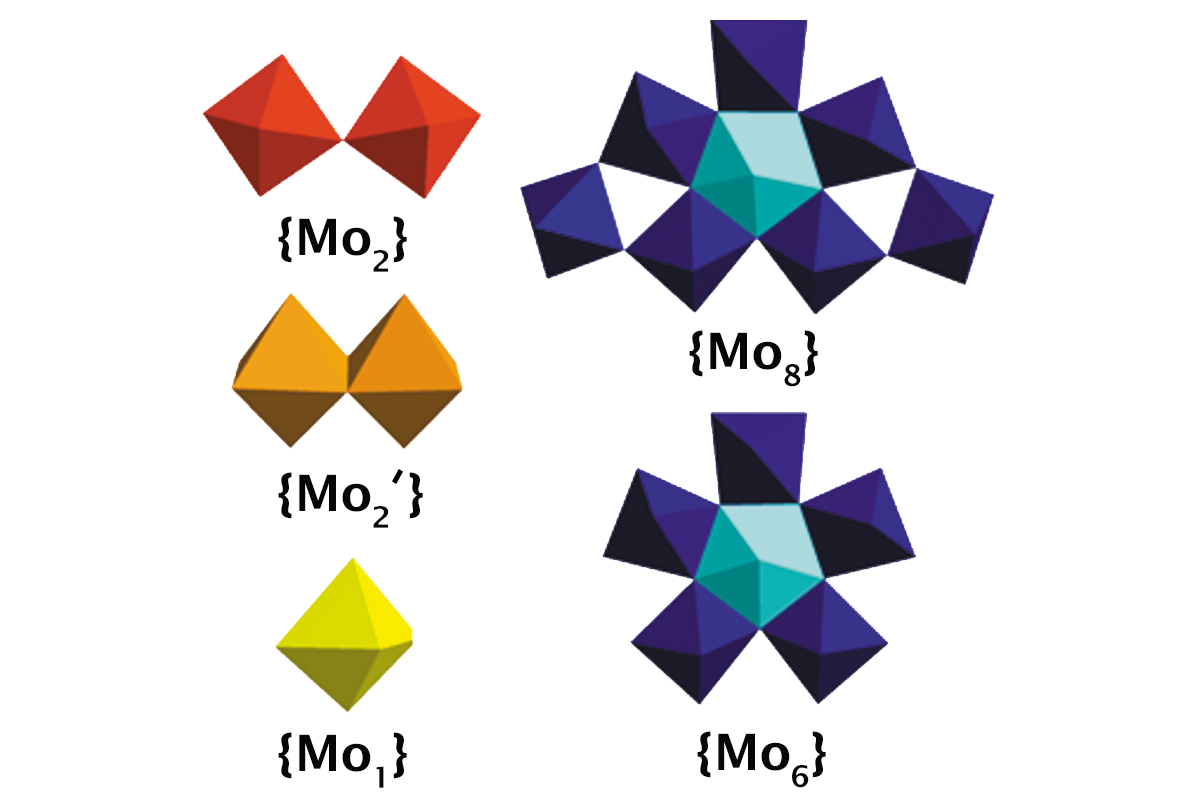 Contrary to molybdenum ‘Reds’, additional ions (e.g. 3d- and 4f-metal ions) react differently in ‘Blue’ systems as they are utilized here for fine-tuning the molecular shape (Garrido Ribó et al., 2020) and alternating the molecule’s physical characteristics rather than spanning the cluster framework.

For instance, large electrophilic ‘open-shell’ metal centres, such as 4f-metal ions, alter the overall charge, molecular shape and size, and always cause a symmetry reduction of molybdenum ‘Blues’ when introduced into their frameworks (Al-Sayed & Rompel, 2022). In ‘Blue’ systems, however, 3d-metal ions seem to behave in a significantly opposite manner from their 4f counterparts considering their relatively small size which leaves them without any impact on the assembly of the {Mo1}, {Mo2} and {Mo8} building blocks (Fig. 1).

Thirdly, in terms of functionalizability, the ‘Blues’ and ‘Browns’ can be organically functionalized, resulting in reaction vessels for studying confined molecules. Organic hybridization is typically accomplished by attaching carboxyl groups to the cluster and nitrogen-containing pendant groups in carboxylic acids. Such constructs are capable of promoting molecular growth and triggering the formation of various guest@host architectures (Xuan et al., 2017, 2019; Imai et al., 2009). In stark contrast to their ‘Blue’ counterparts, nothing is yet known about the organic hybridizability of molybdenum ‘Reds’. In the event of a molybdenum ‘Red’ hybridization, the dumbbell-shaped and edge-sharing {Mo2'} (Fig. 1) building blocks would have to be functionalized organically.

In this context, Al-Sayed et al. (2022) recently made a significant contribution, reporting a new binding mode of an organic hybridization reagent in mixed-valence polyoxomolybdates (Al-Sayed et al., 2022). The organic functionalization of a dumbbell-shaped and edge-sharing {Mo2'} building block occurred through chelation of a pyridine derivative, as shown by the isolation of the [Mo2O2(OH)4(C6H4NO2)2]2+ unit (Fig. 2) acting as a charge-balancing dication for the molybdenum ‘Blue’ cluster Na4[Mo2O2(OH)4(C6H4NO2)2]2[Mo120Ce6O366H12(OH)2(H2O)76]∼200H2O. As ‘Reds’ comprise a multitude of {Mo2'} units, the outstanding work of Al-Sayed et al. (2022) represents a major synthetic step forward, since it showcases the first example of the N,O-chelation of {Mo2'} units (Fig. 2). 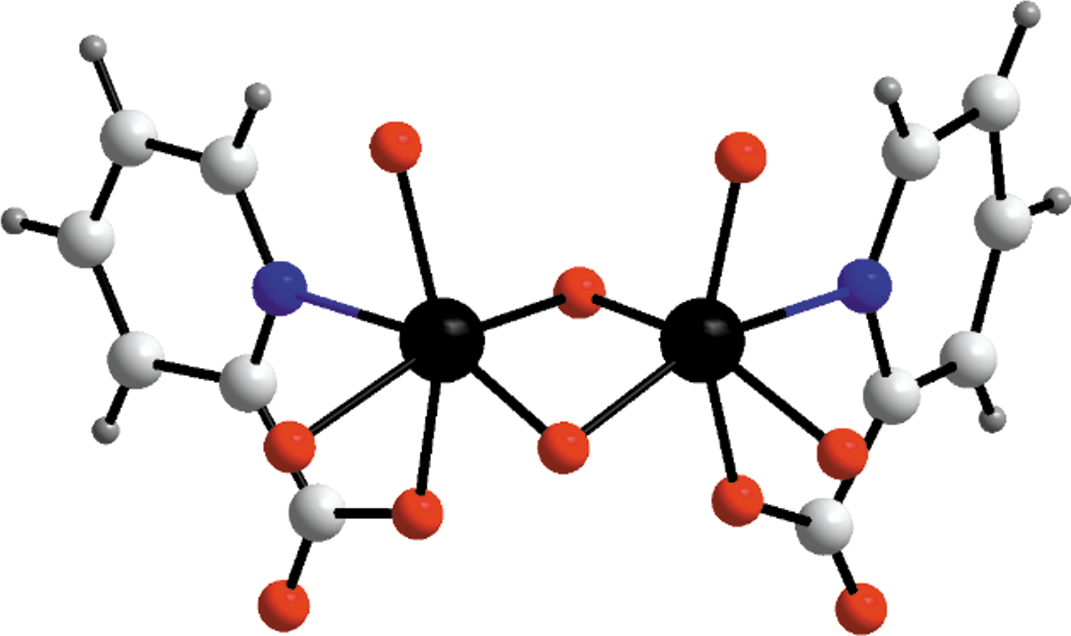 To understand the fundamental principles of a multicomponent system driving the assembly of these aesthetically pleasing constructions, as well as the prospects for forming novel ones, is a major undertaking. Identifying novel steps in the formation process of mixed-valence polyoxomolybdates, such as an effect of a structure-directing ligand or implementing a unique functionalization of building blocks, will enable the construction of POM clusters with unprecedented sizes and topologies, thereby shedding light upon the mostly elusive self-assembly mechanisms, ultimately perhaps paving the way towards novel POM architectures with nuclearities surpassing the famous Na48[HxMo368O1032(H2O)240(SO4)48]∼1000H2O (Mo368) ‘blue lemon’ (Müller et al., 2002).

More than two decades separate the discovery of the ‘Blues’ and the ‘Reds’. Is that the end of the molybdenum classes, or will the synthetic chemists have yet another new colour to enjoy?