Water, water everywhere: the maintenance of the genome’s structural integrity 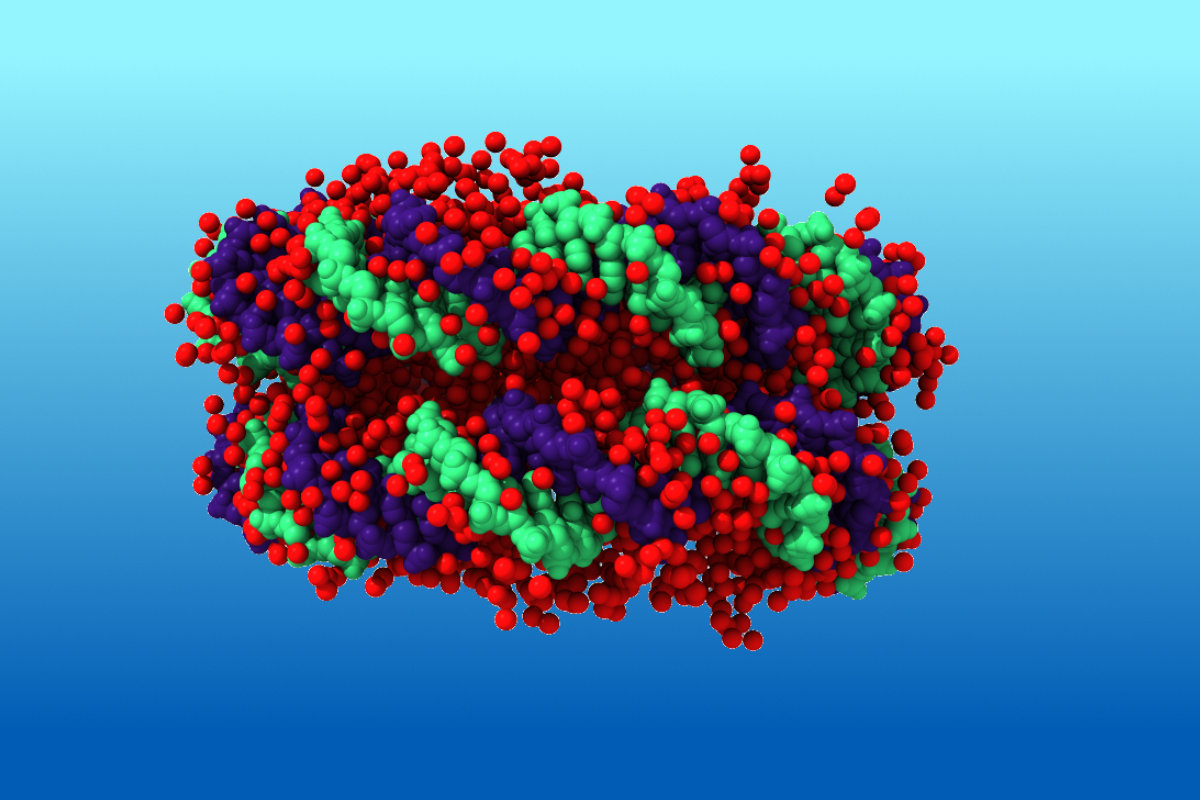 All forms of life on planet Earth require water for survival and growth, from the most primitive of organisms through to Homo sapiens. They reproduce, develop and evolve through the expression of genetic information encoded and stored in DNA (in some viruses, RNA instead) for all the proteins and enzymes needed by the organism. Mammalian DNA is tightly packaged into chromosomes with specialised proteins; as described below, the DNA is still directly exposed to the aqueous environment. Water plays a crucial role in maintaining the structural integrity of DNA and undoubtedly also plays a role in protecting the genetic message from external invaders.

The history of DNA structural studies in the early 1950s is almost universally well known, even if some aspects still excite controversy. What is not controversial is that the model-building of Watson and Crick, together with the experimental X-ray fibre diffraction data of Franklin, Wilkins and Gosling, led directly to the double-helical model of DNA. The experimental data were crucial for the work of the modellers. However, the diffraction patterns, demonstrating helicity and base stacking, would themselves not have been obtainable without the realisation and subsequent demonstration by Rosalind Franklin and her student Raymond Gosling that controlled hydration of the fibres was essential for obtaining high-quality fibre diffraction data of the different polymorphs of DNA. The landmark paper describing this work was submitted to Acta Crystallographica in March 1953 and published in September of that year (Franklin & Gosling, 1953). The subsequent three back-to-back papers in Nature describing the double helix model and the experimental work on which it was based were published in April of the same year. Thus, the essential role of water, and even its likely localisation around DNA structural groups, notably the phosphates, was recognised in this work, although any structural detail was lacking. In an almost throw-away remark towards the end of their Acta paper, Franklin and Gosling mentioned the single-crystal structures of adenine and guanine published in 1948 and 1951, also in Acta Crystallographica, by June Broomhead (Obituary, IUCr Newsletter, March 2022), and the potential significance of her results for determining how the bases in DNA might be organised. Franklin and Gosling did not remark on June Broomhead’s observation of water molecules in the guanine hydrochloride crystal structure (Broomfield, 1951) being hydrogen-bonded directly to the bases; this was the first indication that DNA bases themselves could be involved in DNA hydration.

X-ray fibre-diffraction studies after 1953 enabled determination of electron density in individual polymorphs (of which the B-form is the most significant in biological terms) using the standard Fourier map methodology of single-crystal methods. Fibre diffraction methods have been unable to define discrete water molecules around individual sequences in the double helix. By contrast, neutron diffraction fibre methods using deuterated specimens and high-intensity neutron beams have been successful in revealing the presence of some localised water molecules around phosphate groups and in narrow grooves. An inherent limitation of fibre diffraction, in that DNA sequences are averaged, has precluded any more detailed water structure analysis by this, the classic approach to determining DNA structure.

The Watson–Crick model for the B-form of the DNA double helix is supported by extensive genetic and biochemical evidence and is universally accepted as representing genomic DNA. However, a formal proof of the anti-parallel double-helical structure without any preconceived model only became available in 1980 with the ab initio single-crystal structure determination of a short dodecanucleotide (12-mer) duplex in 1980 by Dickerson, Drew and their colleagues. This was followed in 1984 by the (then) remarkable feat of the determination of the crystal structure of the basic repeat unit of the chromosome, the nucleosome. This contains a B-DNA chain 146 base pairs in length, wound around a core of eight histone proteins. Many subsequent X-ray crystallographic studies on nucleosome sequence variants have confirmed that the B-DNA duplex is the major biologically important form of genetic material. One such study, at a remarkable 1.9 Å resolution (Davey et al., 2002), revealed many details of the hydration around the particle, involving 3130 water molecules (Fig. 1, left). The crystals have over 50% solvent content, so these 3130 water atoms, out of a total of over 13,000 protein and nucleic acid atoms, represent only a small fraction of the total water content in these crystals. The rest were too mobile to be captured by the X-ray technology of the day.

The 12-mer structure, which has been re-determined several times at increasingly higher resolution, has also provided the bonus of revealing a detailed atomic level view of first- and second-shell water arrangements around a DNA molecule. The double helix, by its nature, has two continuous indentations, grooves, between the chains, and these are filled with water molecules, especially in narrow regions of this groove (Fig. 1, middle). This continuous two-dimensional ribbon of connected water molecules, known as the `spine of hydration' (Drew & Dickerson, 1981) uses hydrogen bonds to link to the nucleobase edges in the groove, especially to those of adenine–thymine base pairs (Fig. 1, right). This highly structured water spine is not unique to double-helical DNA. Closely similar arrangements have also been observed in quadruplex DNA (Li et al., 2021), the four-stranded arrangements that can form in regions of repetitive guanine-rich genomic sequences and which have analogous grooves (but four rather than two).

Figure 1. Water molecules around and embedded in DNA. (Left) The waters (red spheres) in the nucleosome crystal structure (PDB entry 1KX5). The two strands of DNA are coloured blue and green. Protein has been omitted for clarity. Several DNA minor grooves are indicated by the arrows. (Middle) The waters in a 12-mer DNA duplex structure (Minasov et al., 1999; PDB entry 4C64). (Right) Detailed view of the spine of hydration in the 12-mer, with waters indicated by red spheres and hydrogen bonds by dotted lines. Drawings created with the ChimeraX program (Pettersen et al., 2021).

Water is not just an insulating and stabilising agent for nucleic acids. There are many examples where individual water molecules embedded in DNA play crucial roles in mediation with bound proteins, enzymes and drug molecules.

It is 69 years since the discovery of the structure of the double helix, and it has catalysed much of modern science to the extent that could not have been envisaged by those early pioneers. They would surely have been gratified that the B-DNA structural concept has not only stood the test of time, but that we have been able to visualise the richness of its aqueous environment.