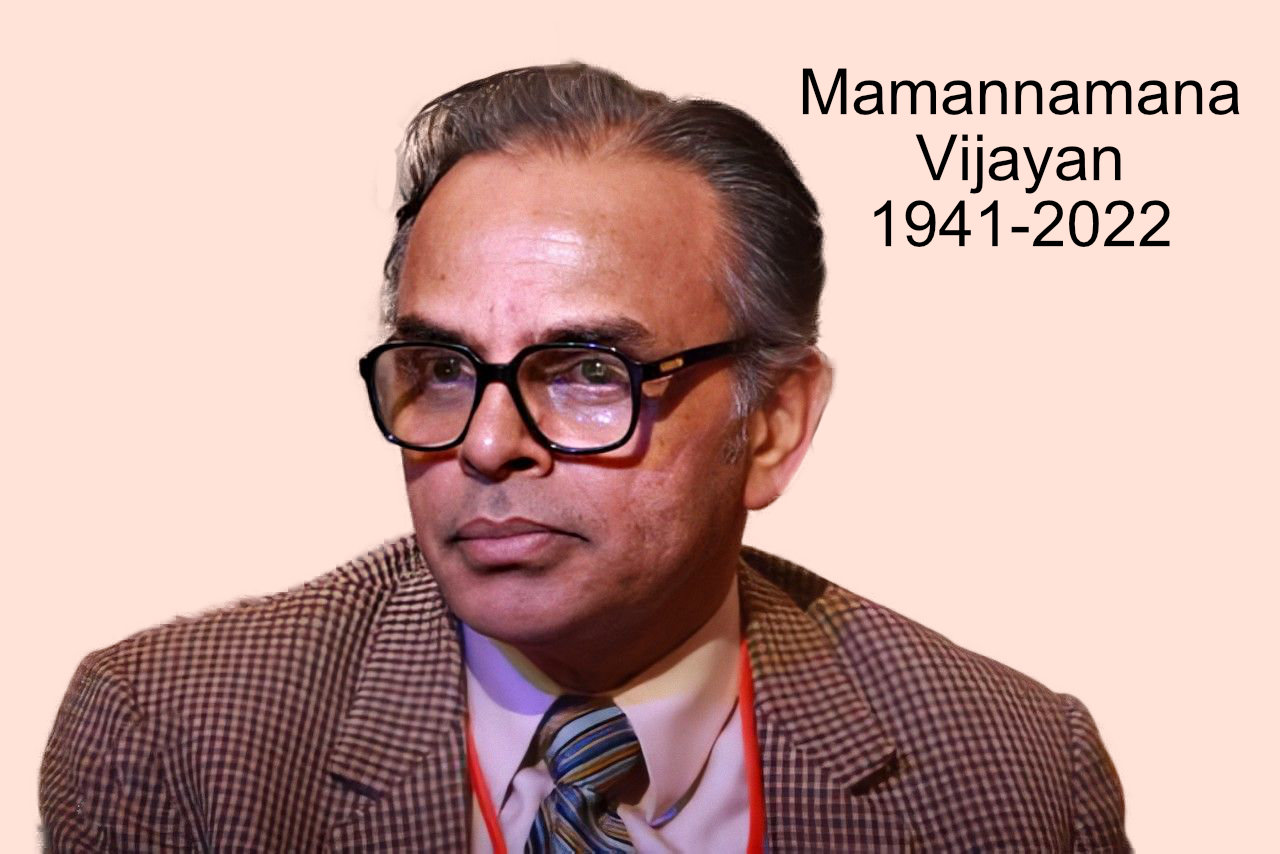 Professor Mamannamana Vijayan, born in 1941, passed away on 24 April 2022 after a prolonged degenerative illness. Vijayan was one of India's finest biophysicists who used crystallography to address fundamental problems in molecular biology. Examples of this approach included studies on the supramolecular self-assembly of small molecules in early evolution, the role of water molecules in protein structures, understanding of carbohydrate recognition by plant lectins and protein–DNA interactions. During these research endeavors, he established a vibrant structural biology laboratory at the Indian Institute of Science (IISc), Bangalore, the first in India. Vijayan had previously received his training at this Institute as a PhD student, which was followed by a remarkable stint in the laboratory of Dorothy Hodgkin at the University of Oxford before returning to India.

Vijayan was born to an orthodox family in the southern state of Kerala in India. He was, however, deeply influenced by Marxism during his student days. After his undergraduate education, he briefly explored Marxist political activism. This phase, where he spent some time in Delhi, led to a chance encounter with Achutha Menon, a prominent political leader from Kerala at that time. At the insistence of Menon, he went on to pursue higher education, eventually obtaining a Masters in physics from the famed Allahabad University. His academic journey began with this transformation and led him to complete his PhD at IISc, Bangalore, followed by post-doctoral training under the wings of Dorothy Hodgkin at the University of Oxford. These early influences profoundly affected his career in science and aspects of life that Vijayan himself readily acknowledged in his memoir A Life Among Men, Women and Molecules.

In 1971 when Vijayan returned to India and joined the Department of Physics at the Indian Institute of Science, Bangalore, there was no infrastructure to collect or process X-ray crystallographic data on protein crystals. Obtaining proteins in their pure form was also considered challenging. Moreover, the public support system for funding Science was only just being established. Indeed, by his own admission, the establishment of the Department of Science and Technology (DST) under the Ministry of Science and Technology in 1971 was a watershed moment for receiving support for such facilities. Also, as a result of the Bangladesh liberation war, funding remained elusive, and positions were frozen for a few years. Using existing facilities in the Physics department, he initiated a program on structure and function studies of anti-inflammatory, analgesic and antibacterial molecules as well as on amino acid complexes. His group made highly significant contributions in these areas of small-molecule crystallography. Vijayan moved to the newly formed Molecular Biophysics Unit in 1974, where he began to build his macromolecular crystallography laboratory from scratch. His joint research projects with Avadhesha Surolia, a lifelong collaboration, ensured that purified plant lectins were readily available for crystal structure determination. With this, he could pursue his dream of examining protein structures in atomic detail. Yet, collecting crystallographic data on photographic plates, scanning photographs, assessing the intensity of diffraction spots, computational processing of the data and solving structures remained a huge challenge. He was soon joined by a younger colleague, M. R. N. Murthy. Photographs were scanned at the National Aerospace Laboratories, Bangalore, in Kalyani Vijayan's laboratory, his life-long partner. With Murthy's help, many computer programs were developed to start structure determination activities in true earnest. The first structure determined was that of Peanut lectin, which showed a more remarkable deviation in its quaternary structure than anticipated. Indeed, it formed one of the first examples of an 'open quaternary structure' in the literature, where the homo-tetrameric protein was expected to exhibit the anticipated 222 or D2 symmetry rather than the association of two dimers in an 'open' manner. Soon, many plant lectin structures were determined. Much of the protein–carbohydrate recognition events began to be understood through a series of these studies on various plant lectin categories.

A chance observation in Vijayan's laboratory demonstrated that protein crystals showed significantly altered diffraction when dehydrated under controlled conditions. This had earlier been observed in studies on haemoglobin, but a systematic study with controlled dehydration was needed. Vijayan and his group undertook studies on many protein crystals under different environment humidity conditions. One startling observation was that of a dramatic improvement in the diffraction of certain crystals, and this occurred alongside abrupt changes in crystal dimensions. This water-mediated transformation was exciting, especially when viewed in the context of crystal structures. These studies led to an appreciation of the critical roles invariant water molecules play in protein structure and function. 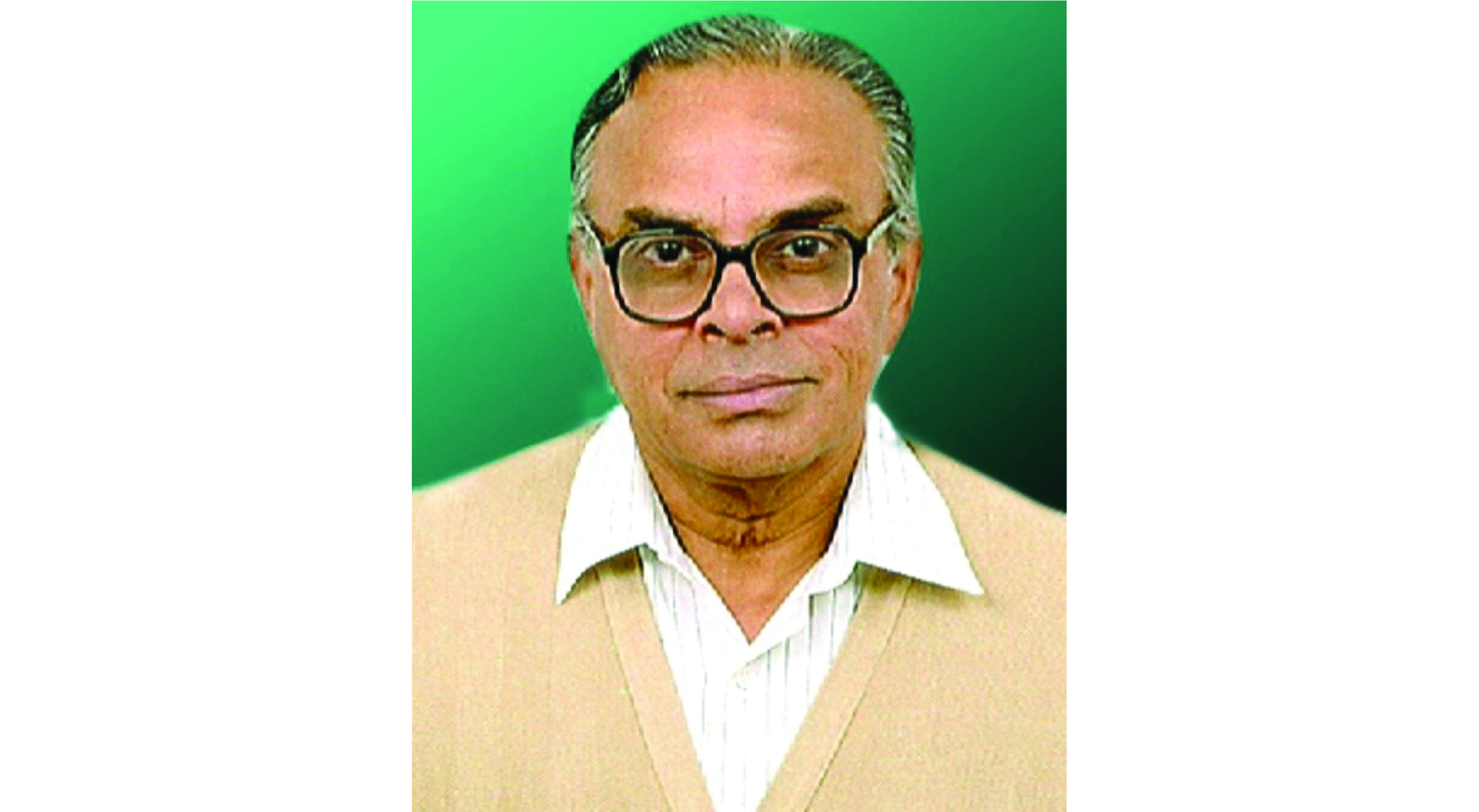 While building up a protein crystallography laboratory, Vijayan was also struck by the problem of spontaneous assembly of small molecules in early evolution. This would form an important thread in the transition from the chemical to the biological world. Vijayan hypothesized that the self-assembly of amino acids was an intrinsic property that would propel amide bonds and, consequently facilitate the formation of linear polypeptides. A similar self-assembly in mixed L- and D-peptides would not be as favorable. A series of peptide–peptide complex structures hinted that this might be a natural phenomenon. Only amino acids of the same chirality would associate with each other and condense to form an amide bond; amino acids of opposing chirality would not.

In the late 1990s and the early part of this century, Vijayan started to take an interest in neglected tropical diseases, and he joined the newly established worldwide consortium of 'Tuberculosis Structural Genomics'. In collaboration with many talented young faculty members in the IISc, several structures were rolled out of Vijayan's laboratory in this phase from Mycobacterium tuberculosis proteins or its cousin Mycobacterium smegmatis. Inhibitor design of these proteins through structural studies also started as a natural consequence.

Vijayan was engaged with the entire scientific community, having been part of scientific/academic advisory boards of many institutions and committees of funding bodies. He was extremely generous, particularly to those from less endowed organizations. In true spirit, he was an academic father figure to his students and associates, and other younger colleagues who worked closely with him. Over the years, he mentored generations of structural biologists and was a guiding force for biophysics research in India.

Vijayan was a humanitarian par excellence. He took a deep interest in the welfare of whosoever came into his sphere of influence. It was not uncommon to find Vijayan in the corridors of the Institute, spending time enquiring about the difficulties of research staff and students. He solved the problems of many people around him, even going beyond those within his own institution, leaving deep impressions on all. The scale did not quite matter, whether it was that students were not receiving fellowships after finishing their tenure or those who had family difficulties, Vijayan would work to solve those difficulties; it required raising money from multiple sources, helping needy families or simply support in the form of solid mentorship. It is often said that good human values percolate in different schools of people, and Dorothy Hodgkin was a prime example. In the true sense, Vijayan had imbibed all the values taught by Dorothy in this respect and had even bettered those by bringing his experiences from childhood or those in his student days. Vijayan will be sorely missed.

An obituary for Professor Vijayan by Ted Baker has recently appeared in Acta Cryst. D.

A list of papers published by Professor Vijayan in IUCr journals can be seen here, and a collection of photos from the IUCr gallery here.