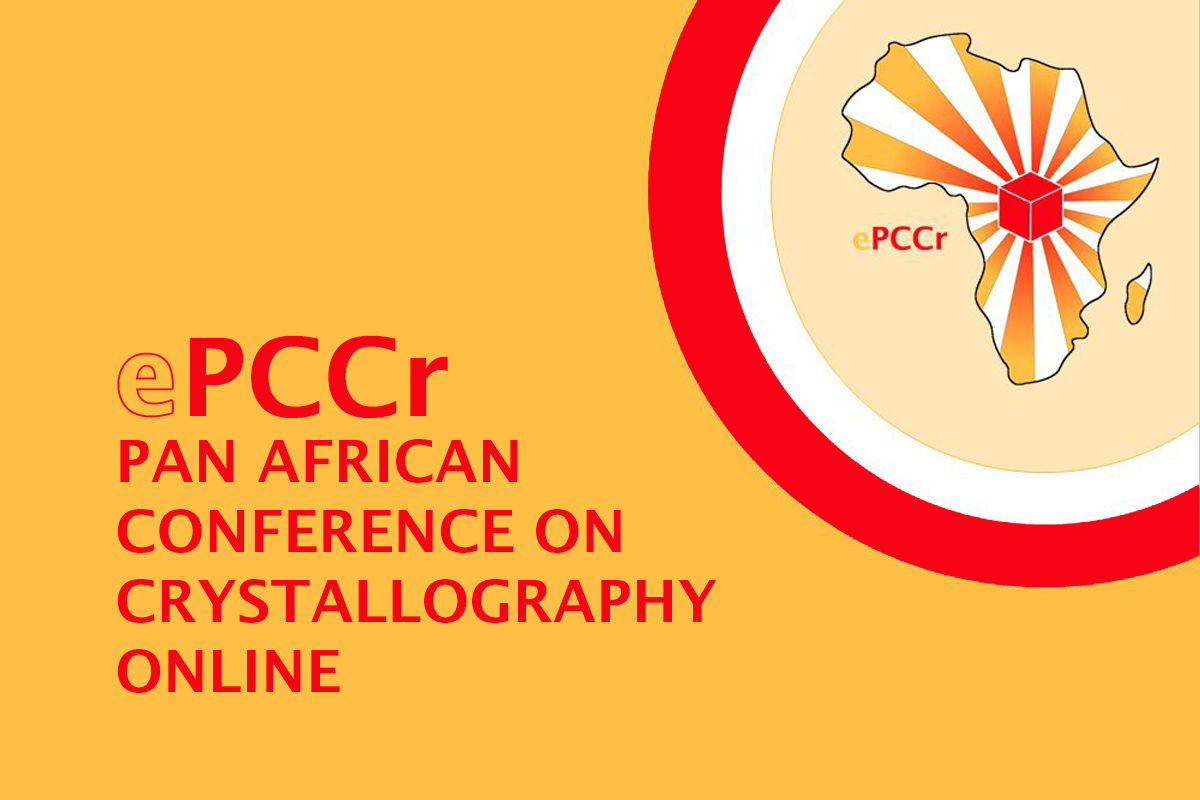 The first Pan-African Conference on Crystallography, PCCr1, was held in Dschang, Cameroon, in 2016. This highly successful meeting attracted 192 participants from 32 countries, including 20 African countries. PCCr2 followed in 2019, with over 200 participants from 35 countries. This was a joint meeting with the African Light Source (AfLS), and was hosted in Accra, Ghana. PCCr3, which will take place in Nairobi, Kenya, was scheduled for 2021. Unfortunately, due to the pandemic, this meeting had to be postponed. The Steering Committee of the African Crystallographic Association, along with the Local Organizing Committee of PCCr3, decided to hold an online meeting in order to continue the momentum and sense of community generated during the first two PCCr meetings. ePCCr was therefore organized.

The theme of ePCCr was 'Crystallography, an interdisciplinary science for the Africa of the future'. Submissions were invited in the following thematic areas:

The ePCCr was organized as a joint meeting together with the AfLS and the African Physical Society (AfPS). There is significant overlap of interest between these three groups, as well as overlap of communities. There was also a group of ten co-convenors, also with overlap of interests (Fig. 1).

The joint event was hosted by X-Tech Lab in Benin. Each day had two plenary sessions that were common to all delegates. The Opening and Closing Ceremonies were also organized jointly by ePCCr, AflS and AfPS.

Figure 1. The companion Pan-African Conferences and the co-convenor organisations that worked together for the joint event.

The joint meeting had a total number of 554 registered delegates. Of these, 208 delegates were specifically registered for the ePCCr meeting.

The ePCCr was characterized by great talks from plenary lectures to keynote addresses. These talks covered aspects of crystal engineering, inorganic materials and structural chemistry and biology where crystallographic tools have been applied in the characterization of different materials that are used in our everyday lives. Plenary lectures and keynote addresses were presented by scientists from Africa and other parts of the world.

Polymorphism was a key feature in some of the talks that were presented by renowned and emerging scientists. Professor Susan Reutzel-Edens (CCDC, Cambridge, UK) had an inspiring plenary talk on Inspiring Medicines Design Through Solid State Chemistry (Fig. 2). In her presentation she highlighted methods for identifying drug polymorphs using computational and experimental methods. This was a well-timed presentation given the fact that the world is facing pandemics that need to be eradicated through developing new drugs and vaccines. Professor Bill Jones (University of Cambridge, UK) gave a presentation on Crystallization methods and disappearing polymorphs. This further reinforced the importance of understanding the occurrence of polymorphic materials. This knowledge is very useful especially in pharmaceutical industries involved in the manufacture of drugs. In a keynote address Dr Eunice Nyawade (Jomo Kenyatta University of Agriculture and Technology, Kenya) stressed the importance of single-crystal X-ray diffraction in characterization of polymorphic ruthenium complexes. Dr Tetteh Samuel (University of Cape Coast, Ghana) showed how polymorphism could be predicted using the Cambridge Structural Database (CSD). His presentation acted as a forerunner to the CSD workshop, for which 58 delegates registered, that looked at structural visualization with Mercury and searching the CSD using ConQuest. This workshop was attended by students and early-career researchers. 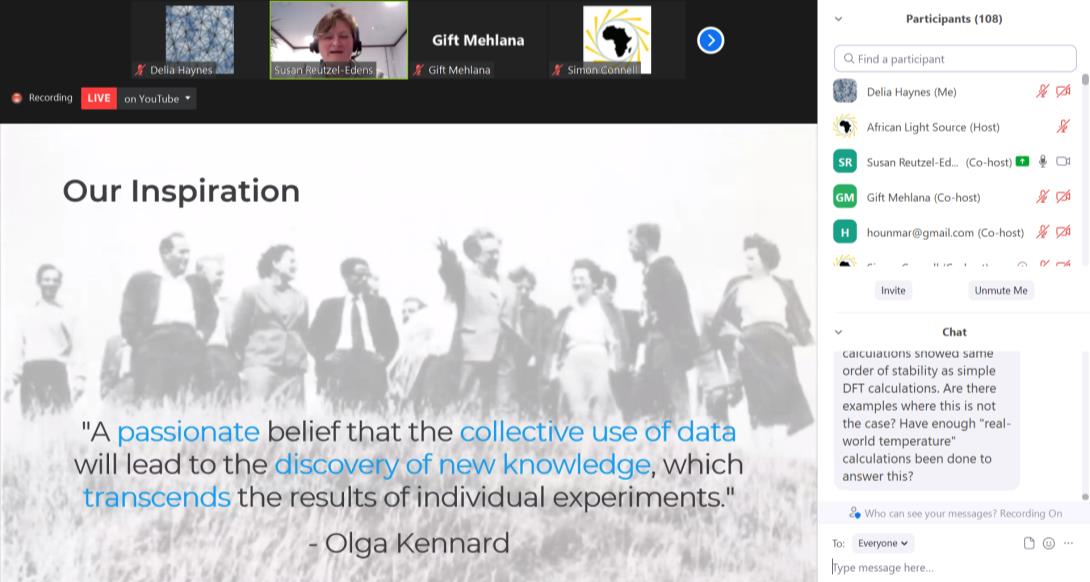 A plenary lecture on protein crystallography was presented by Professor Richard Garratt (University of São Paulo, Brazil). He spoke about unravelling the complexities of septin filaments using crystallography. He also spoke about the importance of infrastructure development in advancing science in Brazil, particularly in terms of the construction of the first synchrotron in Latin America, and how this has changed science in the region. Another excellent plenary lecture was given by Professor Seham Abdel-Aal (Cairo University, Egypt) who presented her work on hybrid perovskite materials and their properties.

Metal–organic frameworks (MOFs) are a topical issue and as such their research is moving fast in directions as diverse as indoor climate and biotechnology. This was evidenced by keynote addresses by Professor Neil Champness (University of Birmingham, UK) and Dr Tendai Gadzikwa (Kansas State University, USA). The importance of these new materials in gas storage to catalysis was also highlighted. Dr Gadzikwa outlined how these materials can be used as scaffolds for enzyme-inspired catalysis paving the way for their potential application in biotechnology. In a related presentation, Professor Lars Öhrström (Chalmers University of Technology, Stockholm, Sweden) explained how MOFs can be made by design and how their structures could be reduced to simple nets, which we read about everyday in general chemistry textbooks. He further explained how MOF research has completely changed the way we look at the solid state, what we can do with it, how we can investigate it and how it pushes the limits of experimental techniques. Cyrielle Dazem Fogou (University of Yaoundé, Cameroon) briefly presented topological analysis in metal oxalates. Both Dazem Fogou and Öhrström explained the importance of topological analysis in the context of solving structures from powder X-ray diffraction data, and how success has been achieved with covalent organic frameworks. Other presentations in the MOF area included structural transformations mediated by solvents. These talks were presented by Dr Christophe Ndamyabera and Alan Eaby of the University of Cape Town and Stellenbosch University, respectively.

Large facilities and presentations from our sponsors

During the conference, several instrument manufacturers had the opportunity to showcase their products. Vernon Smith of Bruker, James Gordon of Rigaku and Marcus Mueller of Dectris presented on some of the instruments useful in material characterization, with a focus on crystallographic-oriented research. Dr Tom Blanton of ICDD presented on material characterization using powder diffraction techniques and the Powder Diffraction File (PDF). By using the PDF, it is possible to identify all phases that are present in a material making the PDF an invaluable tool in mining and pharmaceutical industries.

ePCCr had a total of nine invited lectures (three plenary lectures and six keynote lectures). Five of the invited speakers were African, with three currently based in Africa. Four of the nine invited speakers were female. There were an additional 20 talks selected from submitted abstracts, of which nine were given by students or young researchers, and six by female delegates. An additional five presentations were given by sponsors.

The ePCCr also involved several lively poster sessions, which were held online in Gather Town. A total of 26 posters were accepted.

Thanks to generous sponsorship, six poster prizes and three speaker prizes were awarded. The winners of poster and speaker prizes, selected from participants in the ePCCr conference by a panel of judges, were announced at the conference closing ceremony. All prize winners received a certificate and a USD200 prize.

The ePCCr successfully brought together the crystallography community in Africa, showcasing African research in crystallography and enabling networking with the worldwide crystallography community. The launch of AfCA was a highlight of the meeting and could easily be attended by people from many countries due to the online format. Working together with AfLS and AfPS was of great value – our communities have much in common and all benefitted from the interaction between the various groups. The PCCr meetings are now well established as a conference series for the African scientific community.