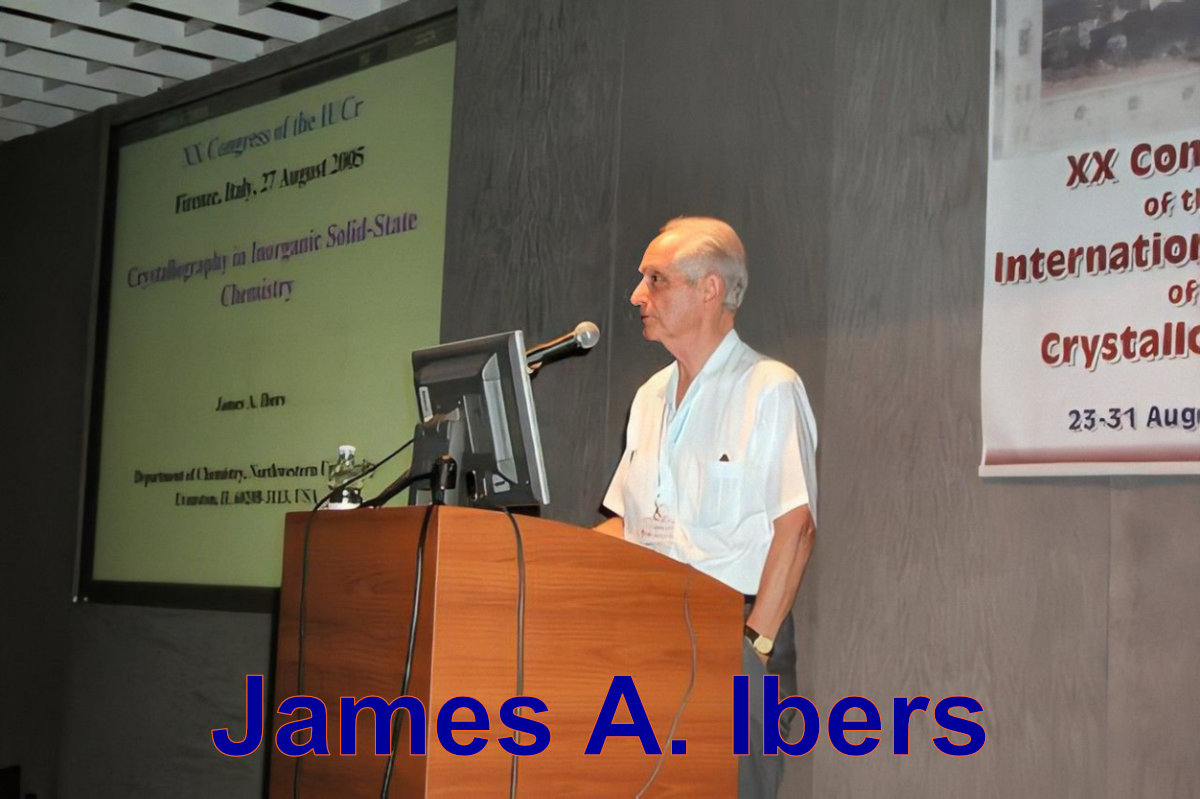 Jim Ibers lecturing at the 20th IUCr Congress in Florence, Italy, in 2005.

James Arthur Ibers, renowned chemist and crystallographer, died on 14 December 2021 at the age of 91. He was an active scientist to the end; during November, he was still collaborating on scientific papers.

Ibers is an author of more than 870 substantive research publications, 115 of them in IUCr journals. His papers have been cited nearly 46,000 times; his h index is 102. His name is linked to 640 CSD refcodes and 723 ICSD entries. He was elected to the U. S. National Academy of Sciences. He received both the American Chemical Society’s Award in Inorganic Chemistry and its Award for Distinguished Service in the Advancement of Inorganic Chemistry. He also received the Linus Pauling Medal, the California Institute of Technology Distinguished Alumni Award and the American Crystallographic Association’s Martin J. Buerger Award. He trained scores of graduate students and postdocs – more than 175 as of 2002, when many returned for a weekend celebration of his career. His last student graduated in 2014.

Jim, as he insisted on being called by even his most junior graduate students, was born and raised in Los Angeles. He earned his BS in 1951 and his PhD in 1954 from the nearby California Institute of Technology. After a postdoc (1954–1955) with John Cowley in Australia, he worked at the Shell Development Company in Emeryville, CA, for six years (1955–1961), then spent three years at Brookhaven National Lab before moving in 1965 to Northwestern University in Evanston, IL. There he was a professor (later an emeritus professor) for more than 55 years.

As an undergraduate at Caltech, Jim first did research with Norman Davidson. When Davidson’s funding became tight, he advised Jim to talk with crystallographer David Shoemaker, whose name he said but did not spell. By chance, Jim first saw the door of Verner Schomaker, who, like Shoemaker, was a former student of Linus Pauling and then his protégé. Jim later considered the mistake to have been lucky; last September he described Schomaker as the most perceptive scientist he had ever known. Jim’s first papers concerned electron diffraction: a study of OF2 with Schomaker and calculations of electron scattering amplitudes with postdoc Jean Hoerni. Jim also calculated X-ray form factors for C, N and O atoms with Hoerni and later for Be, B and Hg while at Shell. In Volume III of the ”red series” of International Tables (published in 1962) Jim was responsible for Table 3.3.1 (scattering factors for X-rays) and, with Boris Vainshtein, for Table 3.3.3 (scattering amplitudes for electrons).

Jim’s first report of the study of a crystal was a sole-author paper published in Acta Cryst. in 1953 while he was still a graduate student; the title was The unit cell and space group of tetrapyridinecopper (II) fluoborate. The last sentence of that short report is “Because of the size and the complexity of the unit cell, no further work is contemplated on this structure.” In 2013 two groups did finally publish the structure of the P212121, Z’=1 unit cell Jim had found (refcode family ZZZSWE; 35 non-H atoms).

During his postdoc with John Cowley, Jim used a combination of electron diffraction and powder diffraction to study graphite intercalated with FeCl3. While at Shell, he published work based on vibrational spectroscopy and solid-state NMR studies, and reported a new calculation of the barrier to the inversion of ammonia (325 citations so far).

When corporate changes made conditions at Shell Development difficult, Jim moved to Brookhaven to work with Walter Hamilton, a close friend from graduate school, and with Sam La Placa. An early project was the structure of XeF4. In his memoir for the ACA’s History Portal, Jim wrote:

Shortly after my arrival, at a seminar there was excitement over the report of xenon tetrafluoride, the first stable rare-gas compound. Someone in the back of the seminar room said he had repeated the synthesis following the announcement of its discovery. [One can prepare XeF4 from Xe, F2, and sunlight]. ... The sample of XeF4 started the La Placa, Hamilton, and Ibers adventures in crystallography.

With Walter and/or Sam, or by himself, Jim published more than 20 structures determined while he was at Brookhaven; the three scientists demonstrated that crystal structures of moderate size could be determined, at least by experts, in a semi-routine way. Most data were collected on film but later there was a GE quarter-circle diffractometer that put out numbers but was still far from automatic. Jim, Walter and Sam had to develop methods and procedures as they went along. Jim was later recognized as having compiled an excellent collection of crystallographic software. Most of the large programs (ORFLS, ORFFE, FORDAP and ORTEP) had been written by others, but Jim added features (e.g. correction for dispersion, group refinement), and integrated the documented routines into a simple, but very effective and reliable, system that he and many others used for decades and that became the basis of two commercial packages.

Neutron data could be collected at Brookhaven so Jim and Walter determined the structures of some simple H-bonded systems. That work led to their 1968 book Hydrogen Bonding in Solids. Later they worked together to edit Volume IV of the “red series” of International Tables, which was published in 1974.

When Jim moved to Northwestern, he was able to purchase an “automated” Picker four-circle diffractometer. Determination of the matrix relating the crystal and diffractometer coordinate systems still required lots of manual work, but once the orientation matrix was known, data collection was automatic, at least as long as the punched cards generated at the campus computer center, carried across campus and loaded into an IBM keypunch connected to the diffractometer didn’t jam.

Jim had the fourth Picker diffractometer manufactured, and it was no black box. He and two of his first postdocs (Peter Corfield and Bob Doedens) had to devise procedures and write programs. The description of data collection in their 1967 paper in Inorg. Chem. (2, 197–204) was so thorough and useful that it was referenced often enough to be designated in 1981 as a “Citation Classic”. It is notable that the reported methodology, like that for least-squares group refinement [Acta Cryst. (1965). 18, 511–519], is somewhat buried within a paper that focusses on the discussion of the structure of a chemically important compound.

Jim’s stature as an inorganic chemist meant that journals wanted him on their editorial boards. During his long service (1965–1978) on the editorial board of Inorg. Chem. he played a major role in setting the standards for the publication of crystallographic work. Other boards included those of Inorg. Chim. Acta, J. Organomet. Chem., Organometallics, J. Am. Chem. Soc., and later J. Solid State Chem., Eur. J. Solid State Inorg. Chem. and J. Porph. Phthal. He was also a longtime editor of the series Structure and Bonding.

After a sabbatical year at Caltech (1981–1982) Jim shifted his focus to the synthesis and characterization of chalcogenides (compounds containing S, Se or Te), and chemical syntheses became a much larger part of his research program. Earlier projects continued, especially in collaboration with other Northwestern faculty, but the chalcogenide project became central.

While crystallography continued to be the backbone of Jim’s research, he would not start data collection unless the new solid-state compound, which had almost always been synthesized in his lab, had been characterized by complementary methods. Reactions of solids were carried out at high temperature (>600°C) and under vacuum to avoid oxide formation. Physical characterization included elemental analysis, resistivity, optical absorption and magnetic measurements. Powder X-ray diffraction was used to evaluate purity. Single-crystal X-ray diffraction then gave the details of the structure. 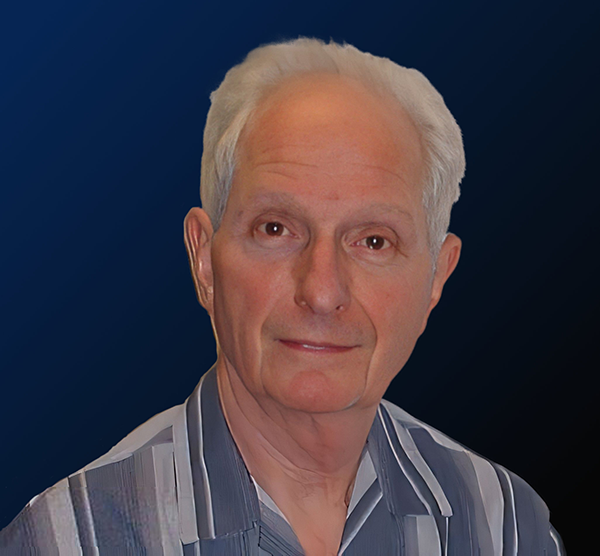 The work progressed from binary to ternary to quaternary chalcogenides. In the last decades Jim became known for his studies of actinide chalcogenides. The pace was such that there were many results to write up even after 2015, when he no longer had laboratory space for active synthetic work. So he wrote. As always, the language in his papers was laconic, direct and data-driven. He invariably changed “due to” to “owing to” and “compared with” to “compared to”.

Late in his career Jim worked with complex crystal structures that required non-standard crystallographic techniques, such as multi-dimensional crystallography, for their refinement. Many of the compounds Jim’s group synthesized were found to be modulated with either commensurate or incommensurate supercells as a result of positional or occupational periodic distortions.

Among crystallographers Jim sometimes referred to himself as the Practicing Crystallographic Idiot, which he most certainly was not. In his ACA memoir he claimed that in that role and at a 1962 meeting of a small group planning the space-group volume of International Tables, he had saved the b-unique setting of monoclinic unit cells from being left out by physicists who preferred c. He also claimed to have insisted that the information necessary to define the unique part of a unit cell be included with the space-group diagrams. Including that information was intended to prevent the measuring of half the data twice back in the days when collecting even just the unique reflections could take weeks, but sometimes half the data got measured twice anyway, even at Northwestern.

Classes taught by Jim were never dull because of his dry wit and somewhat quirky sense of humor. He once gave a class of non-science majors averages for the length, width and depth of Lake Michigan, the volume of a fish, the number of fish per cubic yard of lake and the densities of lake water and of the fish, and then asked the students to calculate the weight of Lake Michigan with and without the fish. That assignment kept the teaching assistants for the class quite busy.

Jim had a long and happy marriage with Joyce (née Joyce Audrey Henderson), whom he had known since their elementary school days. Their two children brought them great joy, and they welcomed a succession of well-loved Persian cats into their homes during their 69 years together. Cultural events, especially concerts, opera and the theatre, were an important part of their lives. They also cooked seriously and entertained with pleasure; members of Jim’s research group and special visitors were treated to memorable dinners and parties at the Ibers’ home.

More information is available in the memoir Jim wrote for the ACA’s History Portal and in the more informal remembrances of 19 former students, postdocs and visitors that appeared in the Spring 2022 issue of the ACA’s newsletter RefleXions (pp. 34–46). We thank all whose memories we have used and are particularly grateful to Christos D. Malliakas for information about Jim’s most recent research.