The 50th anniversary of the Crystallographic Society of Japan 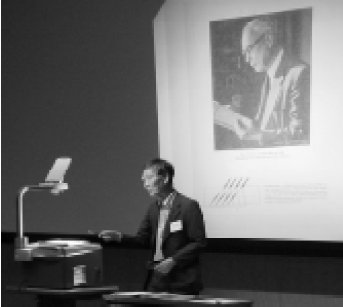 N. Kato, Reminiscences of P. P. Ewald.
A symposium to celebrate the 50th anniversary of the Crystallographic Society of Japan was held on July 1 in Tokyo. After opening remarks by Fujiko Iwasaki (President of the CrSJ), Yasuhiko Fujii (Chair of the National Committee for Crystallography, The Science Council of Japan ), Yuji Ohashi (President of AsCA) and Michiyoshi Tanaka (Vice-president of the IUCr) reviewed the fifty year history and activities of the CrSJ. Emphases was placed on the exceptional quality of Japanese crystallography school founded by Torahiko Terada (1878-1935) and his pupil Shoji Nishikawa (1884-1952), who later became the first president of the CrSJ. Terada had independently discovered the relationship equivalent to the Bragg rule in 1913(1). Nishikawa determined the structure of spinel by using space group theory in 1915(2) and was a supervisor of R.W.G. Wyckoff(3).