The crystallographic tourist in the Antarctic

Durward Cruickshank on Jan. 18, 1998 went on a cruise to the Antarctic Peninsula studying the charts and noticed a region called Crystal Sound, off the west coast of the peninsula. 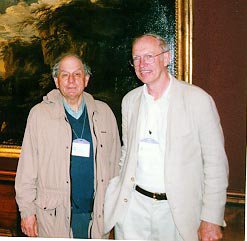 Durward Cruickshank and Neil Issacs, the past, current and only holders of the Joseph Black Chair in the Dept of Chemistry at the University of Glasgow at the Kelvingrove Art Gallery and Museum in Glasgow.
On looking more closely I recognized some rather familiar names given to the little islands and rocks in the Sound: Bragg, Dennison, Bernal, Fowler, Pauling, Owston, Shull, Wollan, Levy, Peterson.

Thanks to help from the British Antarctic Survey and the Scott Polar Research Institute, both in Cambridge, and with some assistance from Frank Allen and Kate Crennell, I eventually learnt how these bleak places got their names. The Antarctic Place-names Committee decided to use the names of pioneers in techniques which have helped in the elucidation of Antarctic problems. Glaciologists are obvious choices, and within that group the names of the investigators of the structure of ice crystals were chosen for features in Crystal Sound.

R. W. James FRS (1891-1964), colleague of W.L. Bragg and author of The Optical Principles of the Diffraction of X-Rays, was a member of the legendary Shackleton expedition of 1914-1916. James' most distinguished student is well known to the BCA: Sir Aaron Klug OM, President of the Royal Society and winner of the Nobel Prize in Chemistry in 1982 for his development of crystallographic electron microscopy and the structures of nucleic acid-protein complexes.