Dorothy! You recognize the face. You know the name. But have you read the book? 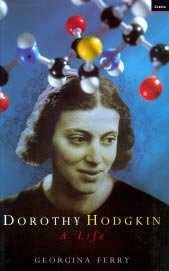 This book, the 400-page biography of Dorothy Hodgkin, is a superb portrait, in fascinating detail, of the life-history, experiences and personality of this unique individual. The book is so well written, so readable and, in its style, so delightfully in harmony with the life being described, that it is a real treat to read, a fitting tribute to an outstanding and memorable person.

While the context of this book is the development of crystallography, during the initial three decades of its application to organic structures, the focus of the book is simply Dorothy herself – the person – how she started life, how she worked her way into a scientific career, battled against the odds that were stacked against women in those days, quietly established herself amongst the top echelon of structural crystallographers and eventually developed an international reputation and influence. Her crystallography was outstanding (it was Dorothy’s first and most passionate love) but her personality is what many of us remember most.

Crystallographers have a special bond with Dorothy. She was one of us, absolutely, in the thick of our activities from the beginning of our crystallographic science and community (the 1940’s) until her death at the age of 84. She was a familiar face in our conferences. Encountering her there - an unobtrusive, gentle, slow moving, courteous lady, no one would suspect that she was particularly important. She was the mother of three children and she was also the person who, with Bernal, obtained the first-ever X-ray diffraction picture from crystalline protein (pepsin, in 1934). She was the leader of the group that elucidated the structure of the first antibiotic, penicillin (in the early 1940s) and was honoured with membership of the Royal Society of London, at the youthful age of 37 (1947). A decade later, she had capped the penicillin success with the structure of Vitamin B12 (1957); and another decade later, the B12 triumph was capped with that of the structure of insulin. She was awarded the Nobel Prize in Chemistry 1964. Her list of students, colleagues and co-workers includes the names of over 110 men and women from over 20 countries. The British Government awarded her the Order of Merit (OM) in 1965, the highest, and rarest British civilian honour. The British Post Office issued a stamp with her portrait: one of four 'women of achievement' in 1996. She had Honorary Membership in eight National Academies, and had received honorary Degrees from 21 Universities. She was the President of the IUCr from 1972-75. Such were the accomplishments of this gentle and lovable lady, 'our Dorothy'.

How did all this happen?

Was it sheer genius? Or the consequence of historical accidents - being in the right place at the right time and knowing the right people? In fact, it was both of these; and this biography by Georgina Ferry expertly takes us through Dorothy's development, from the innocence and excitement of childhood, to the serious and painful traumas of political involvement.

It is now six years since Dorothy died. There have been dozens of obituaries and review articles in the scientific journals and lay press. Even if you have seen these articles, I recommend that you read this rich, full and entertaining biography. What is special about Ferry's book is the style of the narrative and the inclusion of so many delightful details and memorable quotations from Dorothy's letters and notes. Ferry brings Dorothy to life again with her naturalness, informality, and emotional strengh intact. Each chapter is headed with a typical Dorothy quote. (Chap. 1) 'It is a rather rackety childhood in a way' and (Chap. 4) 'It'll serve me absolutely right if the thing is all wrong'. Lest the quotes be misunderstood, each chapter has a normal subheading, such as (Chap. 4) 'Oxford, insulin and Thomas'. These chapter headings are just one way in which Georgina's story re-creates Dorothy's character in the biography.

There was continuous interplay between Dorothy's genius and the opportunities she enjoyed because of her background and circumstances. Her gift for intellectual adventure was actively encouraged by her mother – rare for a young girl in those days. Dorothy’s mother nurtured her daughter's intellectual growth and was prepared to allow her almost unlimited freedom. Another instance of serendipity occurred when one of her father’s friends in Cairo, a chemist, Dr. Joseph, was so impressed by her interest in minerals that he gave her a set of chemicals with which to analyze them. She was particularly enchanted by crystals. With this stimulus and encouragement, she threw herself into the pursuit of the science behind her crystals. Her mother bought her W.H. Bragg's book, 'Concerning the Nature of Things'; and 'The Fundamentals of Biochemistry' by T.R. Parsons and she extracted the necessary organic chemistry from the Encyclopedia Britannica. Her childhood love of crystals never left her.

That Dorothy's parents were so academically supportive was a fundamental factor in her career choice. Her father had graduated from Oxford, and at the age of 17 she was determined to get into Oxford University. Alas, her acceptance at Somerville College, Oxford was delayed a year while she mastered Latin and other requirements. After graduation from Oxford, she benefited again from the help, advice and assistance of well-placed people, including her old friend, Dr. Joseph. As a result she went to Cambridge in 1932, to work with Bernal. Association with Bernal fundamentally influenced the whole of her subsequent career, steering her interests toward the application of X-ray crystallography to biological structures. Ferry’s numerous quotations from personal letters of that time give a vivid picture of the whirl of emotions prior to this move.

Dorothy was with Bernal in Cambridge for only two years (1932-1934) when she was invited by Somerville College to return to Oxford as their Chemistry Instructor where she soon became Lecturer, and then a Fellow. But the friendship with Bernal, and his influence remained.

Friendships in Oxford had crucial significance. In 1934, Robert Robinson gave her crystals of insulin, from which she quickly got very beautiful, but very complex X-ray diffraction pictures. Seven years later, her friend, Ernst Chain, met in the street, told her excitedly how important it would be to determine the structure of penicillin, which was the subject of great controversy and confusion. Soon she was fully engaged in determining its crystal structure. As a result of the penicillin work she made FRS (1947). Her friend Lester Smith brought her some beautiful, cherry-red crystals of Vitamin B12, the structure of which she mapped in 1957, and that accomplishment led to the award of the Nobel Prize. The crystals of insulin became the bases of her most sensational achievement (in 1969). To each successive opportunity, Dorothy applied the full force of her insight, skill, chemical knowledge, and feminine intuition; together with her almost unlimited patience, and these qualities gave her one success after another. Friendships were central to Dorothy's life. They became increasingly international as she began in the 1980s to exert her influence for peace in international relations.

Ferry's biography, which has been available in Europe for two years is now going to be available in the North American continent from Cold Spring Harbour Laboratory Press. For Europe, and all other countries, Granta still have good stocks of both the hard cover edition (at £20) and the softback (at £10) Ð both very good value for their price. 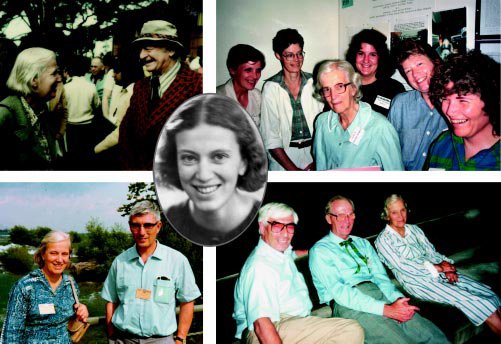 Clockwise from upper left Dorothy with Linus Pauling in Anlonia in 1977; surrounded by women crystallographers (including Carol Huber and Anita Lewit-Bentley) at the ACA meeting in Philadelphia in 1989; at an IUCr International Congress meeting in Beijing with Jack Dunitz and Bill Lipscomb in 1986; with a younger Jack Dunitz visiting Niagara Falls in Ontario, Canada, 1981; and in the center as she looked at graduation from Oxford in 1932.