Women in science and crystallography 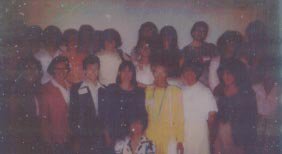 Women, gathered to honor Gabrielle Donnay at a symposium organized by Suzanne Fortier at the ACA meeting in Hamilton Ontario in 1986, including past ACA president Jenny Glusker and future ACA presidents Helen Berman, Connie Chidester, Penny Codding, and Judy Flippen-Anderson.
Unfortunately, a disproportionate amount of the material that appears here (and elsewhere in the Newsletter) is drawn from english language publications. This is more a consequence of the Editors language limitation rather than his national bias. Readers everywhere are invited to submit news items, letters, and observations on crystallography in their country for possible inclusion in the Newsletter. - W.L. Duax

In 1998, women earned their largest percentage of research doctoral degrees in US history, according to a survey performed for NSF. Women received 41.8 percent of all doctorates granted in the United States in 1998. While increases occurred in the number of degrees granted women in the physical sciences and engineering, the percentages remained small: 23.7 and 13 percent of these degrees, respectively, went to women.

Michael Smith (U. of British Columbia), 1993 Nobel Laureate in Chemistry, donated $175,000 of his approximately $525,000 award to Canadian Women in Science & Technology, a group that encourages women to take up careers in science.

In what she titled as 'a very personal account' of Chemical Crystallography in Neuchâtel, Switzerland 1971-1995, Helen Stoeckli-Evans noted that in 1995 she was the only female professor of chemistry in Switzerland and that although she had the title of Professor Associate, she was not a member of the faculty. She commented that 'within the Chemistry Institute I have always been treated fairly. For a woman in science to obtain a faculty position she must be extremely ambitious and motivated and of course twice as good as her male colleagues. To combine all this with a family, children and a home to run is nothing short of a miracle and those that achieve it should be supported and encouraged. I am in an extremely privileged position here in Neuchâtel and appreciate it greatly.'

Stoeckli-Evans attributed her success, at least in part, to her husband's position at Neuchâtel (despite the attendant mutterings of nepotism) [Marie Curie had similiar circumstances. Pierre Curie had a modest position and a laboratory where Marie was permitted to work; it is unlikely that she would otherwise have found a place to do independent research. ed]

In the late 1940s when the Westinghouse Science Talent Search ceremonies were held at the Cosmos Club in Washington, D.C., girls were not permitted to enter the building by the front door.

When the career paths of men and women who held prestigious post-doctoral fellowships between the mid-1950's and the mid-1980s were followed, it was found that with the exception of biological scientists, male scientists in positions of power (doctoral and postdoctoral advisers and tenured professors) often harmed women's scientific careers, both intentionally and unintentionally. Some overt forms of discrimination have lessened in the past 30 years, but others have merely been hidden in the face of federal requirements. Subtle barriers persist, such as excluding women from the informal venues where inside information is exchanged. The authors note that despite increases in skill and knowledge, women continue to lack the advantages that come from being included in powerful networks. How male superiors choose to exercise their power makes a difference in how a woman experiences science and in how her career evolves.

From a review of Gender Differences in Science Careers: The Project Access Study, Gerhard Sonnert with Gerald Holton by Henry Etzkowitz, C&EN, August 28, 1995

There's too much evidence to suggest that, if left to its own devices, the status quo won't change - individuals' goodwill has never been enough. Maria Goeppert Mayer never had a position commensurate with her status until after she won a Nobel Prize. How could this happen if merit were so readily recognized by the system?

Drawing more women and minorities into science is no longer so much about righting the wrongs of the past as it is about developing talent for the next century. Recent estimates indicate that between the mid 1980s and the year 2000, the majority of growth in the labor force will come from the entry of women, people of color, and immigrants. In an international, stridently competitive 'information age', we have to mobilize all of the latent talent in this new work force.