The future is crystalline for Benin: An interview with Thierry d’Almeida 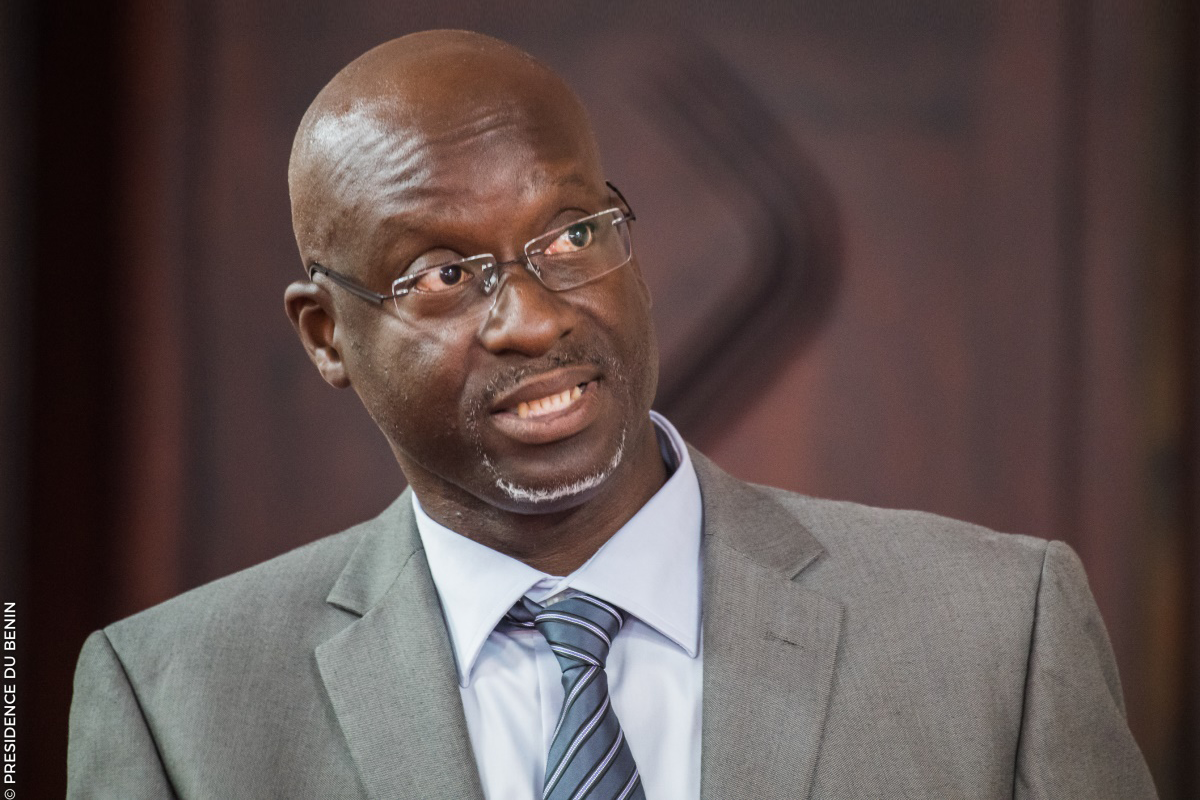 We had a chance for an informal chat with Dr Thierry d’Almeida at the end of one of the numerous meetings of the LAAAMP Executive Committee, when Thierry was invited to discuss the strategies and plan future activities for the development of crystallography and synchrotron-related disciplines in Benin and neighbouring countries. Thierry, who is originally from Benin and works at the CEA (Commissariat à l’Energie Atomique et aux Energies Alternatives, France), was introduced to the LAAAMP Executive Committee by Herman Winick. He immediately impressed us with his enthusiasm and dedication to the cause of improving scientific education and research in Africa as a way for achieving socioeconomic progress, and was eventually selected to deliver a series of presentations as part of the Colloquium Programme of LAAAMP (Lightsources for Africa, the Americas, Asia and Middle-East Project), a joint IUPAP-IUCr project funded under the 2016-2019 ICSU Grants Programme.

Following the successful LAAAMP Colloquium delivered in Cotonou in the period 2 to 5 May 2018, Thierry was invited to spend two weeks in his home country of Benin meeting with President Patrice Talon, his Cabinet and numerous other dignitaries to discuss both LAAAMP and the newly proposed crystallography lab and training programme called XTech-SD (X-Ray Techniques for Sustainable Development).

Q: Thierry, let’s start with XTech-SD? Tell us more about this project.

A: XTech-SD is a project that I designed with Dr Marielle Agbahoungbata, a young chemist from the University of Abomey-Calavi in Benin. The overall objective of the project is to endow the local and regional scientific communities with technical skills that will allow them to use X-ray techniques as tools for solving specific critical socioeconomic issues. The training programme is being implemented in collaboration with LAAAMP and within the framework of the IUCr-UNESCO OpenLab and the IUCr Crystallography in Africa initiatives. We expect to train annually over a hundred Masters and PhD students from Benin and neighbouring countries, such as Nigeria, Togo, Niger and Burkina Faso. We will establish a permanent user research facility with experienced, permanent staff to act as a hub for the region. XTech-SD will have temporary quarters in Cotonou starting from May 2019, but will subsequently relocate to Sèmè City from 2021.

Q: What is Sèmè City?

A: Sèmè City is the International City dedicated to Innovation and Knowledge, presently under development in an area located between Cotonou and Porto-Novo. The project was launched as part of “Revealing Benin”, a transformative large-scale investment programme launched in December 2016 by President Talon and the Government of Benin. Sèmè City houses and promotes synergies between elite educational establishments, research and development centres, and acts as a business incubator. We hope that XTech-SD will become an important asset of Sèmè City.

Q: You met with President Talon and his Cabinet. What was their reaction when you mentioned crystallography and advanced light sources?

A: There were two separate meetings, one with President Talon and another one with the Cabinet. I had one hour on schedule to talk with President Talon and we ended up talking for more than two hours. He was keen to learn everything about all our initiatives. I discovered a man who is perfectly aware of the challenges and who has a clear roadmap in his mind. President Talon stated that he was already aware of the LAAAMP project and will spread the word among his fellow Presidents. His government is ready to support XTech-SD as well as the next joint Pan African Conference on Crystallography and African Light Source Conference (PCCr2/AfLS2, Accra, Ghana, 28 January-2 February 2019).

When I met with the Cabinet, I gave a full presentation about LAAAMP and Advanced Light Sources, which was well received by the Ministries. Dr Marie Odile Attanasso, Benin’s Minister of Higher Education and Scientific Research, remarked that these were just the type of programmes that they have been waiting for.

Q: How important was your LAAAMP Colloquium Programme to ‘spread the word’ and foster such initiatives?

A: My first trip to Benin last May was extremely rewarding, far beyond my expectations. Most people I met, and these were scientists, had only a vague idea about Advanced Light Sources, and were almost totally unaware of the LAAAMP initiative. I met people of different backgrounds (chemistry, biochemistry, physics, mathematics and geology) from the two major universities of the country, Abomey-Calavi in Cotonou and IMSP (Institut de Mathématiques et Sciences Physiques) in Porto-Novo, and the Commissioner of Education.

However, my biggest satisfaction came from the young students. I have been impressed and deeply moved by their thirst of knowledge, their determination to grab the opportunity of the prospect of an African Light Source (AfLS) as a way to play an active role in science.

During that first trip, I decided to set up a local, informal AfLS Working Group composed of some of the brightest young faculties (both chemists and physicists), whose main task was to disseminate further synchrotron science among the students and identify specific studies of interest for the local and West African scientific communities that could be submitted as proposals to LAAAMP’s Partnering Advanced Light Sources in the near future. Within three months, this initial idea matured and transformed into the XTech-SD initiative.

Q: Did you do all this on your own or are there any persons you want to mention or thank?

A: Many, many people should be mentioned. Of course, the Executive Committee of LAAAMP (S. Mtingwa, M. Zema and S. Scandolo) has been and is being very supportive and helpful. Without your initiatives and the idea of having a Colloquium presentation in Benin, none of this would have happened. Jean-Pierre Ezin (founder of the IMSP, Porto-Novo) has been a great facilitator, together with many other locals, among which I want to mention Dr Marielle Agbahoungbata, XTech-SD Project co-Leader, who is presently at University of Zurich with Professor A. Linden and has participated in the IUCr 2017 Congress in Hyderabad, our Working Group at the University of Abomey-Calavi headed by Professor Etienne Sagbo, and all the staff from IMSP.

There is one person who deserves a special mention for making all this happen. This is Claude Borna, the Managing Director of the Sèmè City Development Agency, and Advisor to President Talon. Without her hard work and dedication, we would not have been able to make such significant progress within such a short time period. She was convinced by the unique potential of XTech-SD as a tool for sustainable development and she managed to secure the support of the Government of Benin at the highest level.

Also, I was very lucky to meet Cédric Villani, who is a famous French mathematician and Member of Parliament, who happened to be visiting IMSP during my first trip. We had extensive discussions about the LAAAMP and the AfLS initiatives. Cédric met with President Talon the next day and introduced the AfLS. I was immediately contacted by his advisers, who invited me to give an overview of the project, which I did minutes before leaving the country. They eventually reported to the President and this is how the story started.

Q: How did you end up dealing with such projects? Tell us more about yourself and your previous experiences.

A: My initial background as a graduate student was essentially in materials science and solid-state physics with a strong emphasis on crystallography. But it was not until I joined the Institute for Shock Physics at Washington State University more than 20 years ago, after my PhD, that I realized the extraordinary power of X-rays for interrogating matter under various conditions. During that seminal experience, I performed one of the pioneering X-ray diffraction measurements from a solid undergoing a shock-induced structural phase transition. From that time, I never really stopped using X-rays whether during the eight years that I spent at the European Synchrotron in Grenoble as a beamline scientist or later at the Cavendish Lab in Cambridge, or even now at the CEA. I have been convinced for a long time that X-ray techniques can make a real difference in addressing some of the most critical socioeconomic challenges in developing countries and especially in Africa. Being given the opportunity to serve the LAAAMP is such an extraordinary fortuitous alignment of stars that I intend to build on in order to get something significant done in Africa.

Q: What are the next steps?

A: We are working hard with the Sèmè City team to have the XTech-SD lab established as soon as possible. We are currently discussing with manufacturing companies to secure all necessary equipment on time. Hopefully, we will be able to have the first two-week training session in May/June 2019 under the framework of the IUCr-UNESCO LAAAMP OpenLab initiative. We are planning to have two of these sessions per year directed to 50 students from IMSP plus 60 from other institutions in Benin and neighbouring countries. The course will be part of their curricula. Following a natural trend started by Rwanda in 2008, the teaching will be in English, in order to grow a scientific community prepared to take part in international activities. The XTech-SD Lab will serve as a model of a Feeder Facility for the future African Light Source.

We finally thanked Thierry for his time and encouraging report and wished him every success. He actually transferred a lot of energy and enthusiasm to us. This project is an important step towards the establishment of proper scientific infrastructure in Africa, and also the potential implementation of an African Light Source. It will definitely serve as a model for other African countries.


Thierry’s meetings have received extensive press coverage, including television news, which can be found via these links: