Wrestling with questions at the edge of science methods 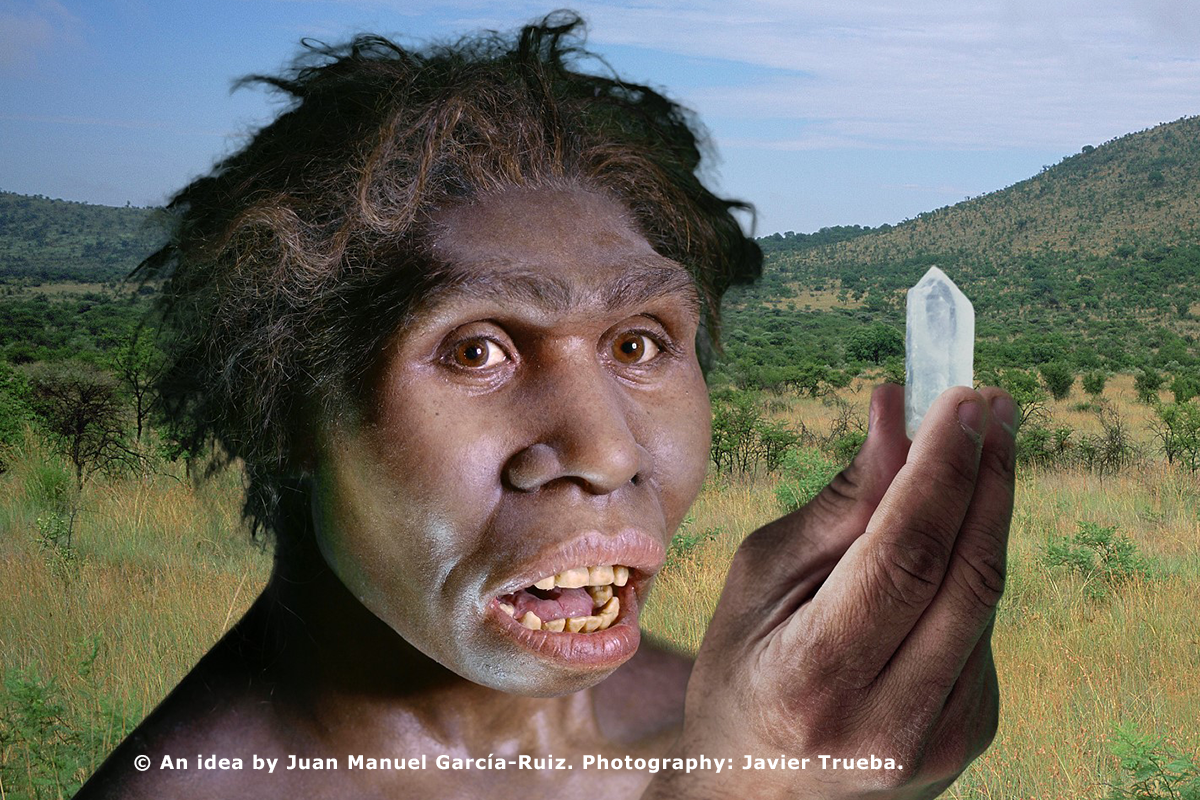 Recently, Professor Juan Manuel García-Ruiz published a delightful, well written essay [1] on the mysteries of what catalysed thinking, symbolism and consciousness. Surely a very important topic. But how to approach it? He does so by posing this question in the context of pre-evolution, and then evolution, of hominids admiring the straightness of crystal edges of the abundant quartz. In reading his essay I subsequently communicated with him by email, following my complimentary preamble above:

JM: Thank you very much for your interest and comments. Certainly, feldspar is more abundant than quartz, but it rarely appears as isolated single crystals as quartz does. Feldspar is a rock-forming mineral that in most cases appears as micro or macro (pheno)crystals with other minerals. Therefore, it is difficult to observe them as three-dimensional isolated objects. However, quartz appears in many outcrops as single crystals in sedimentary environments (Spanish jacinto, or the New York "diamonds") but also in igneous rocks as large crystals in geodes and druses.

JRH: Also might calcite and its delightful double refraction optical effect (https://en.m.wikipedia.org/wiki/Birefringence) allow a further elaboration of the theory?

JM: Calcite is a very singular case. Calcite crystals are not described in the oldest lapidarium and curiously the phenomenon of double diffraction was unknown until the XVI or XVII century. There is no proof, for example, of the use of calcite by the Vikings.

JRH: Finally, Just to mention also that I recall your delightful lecture on this whole topic at an American Crystallographic Association conference.

So, I commend this thought-provoking essay to you, the reader.

JuanMa’s Substantia article makes some interesting observations relating how ancient hominids viewed the world around them and how the discovery of quartz crystals in particular may have been the cause of advances in thinking. He points out that the world of these early humans was one in which everything visible around them was dominated by curves and irregularities. But the quartz crystal was probably the only object that they saw that had straight edges. JuanMa mentions that unmodified crystals of quartz have been found to be associated with ancient hominid sites, suggesting that these people collected the crystals for their aesthetic value rather than for utilitarian purposes. Here he points to an analogy with the famous film "2001: A Space Odyssey" in which a mysterious black perfect slab is discovered planted on earth, presumably by an alien civilisation, and this sparks off the imagination of the primitive creatures that discovered it. JuanMa explains that the black slab was actually intended to be a crystal but that it was coloured black for filming purposes. So, an interesting question arises: suppose that crystals were not discovered by ancient hominids: would this have stalled intellectual development?