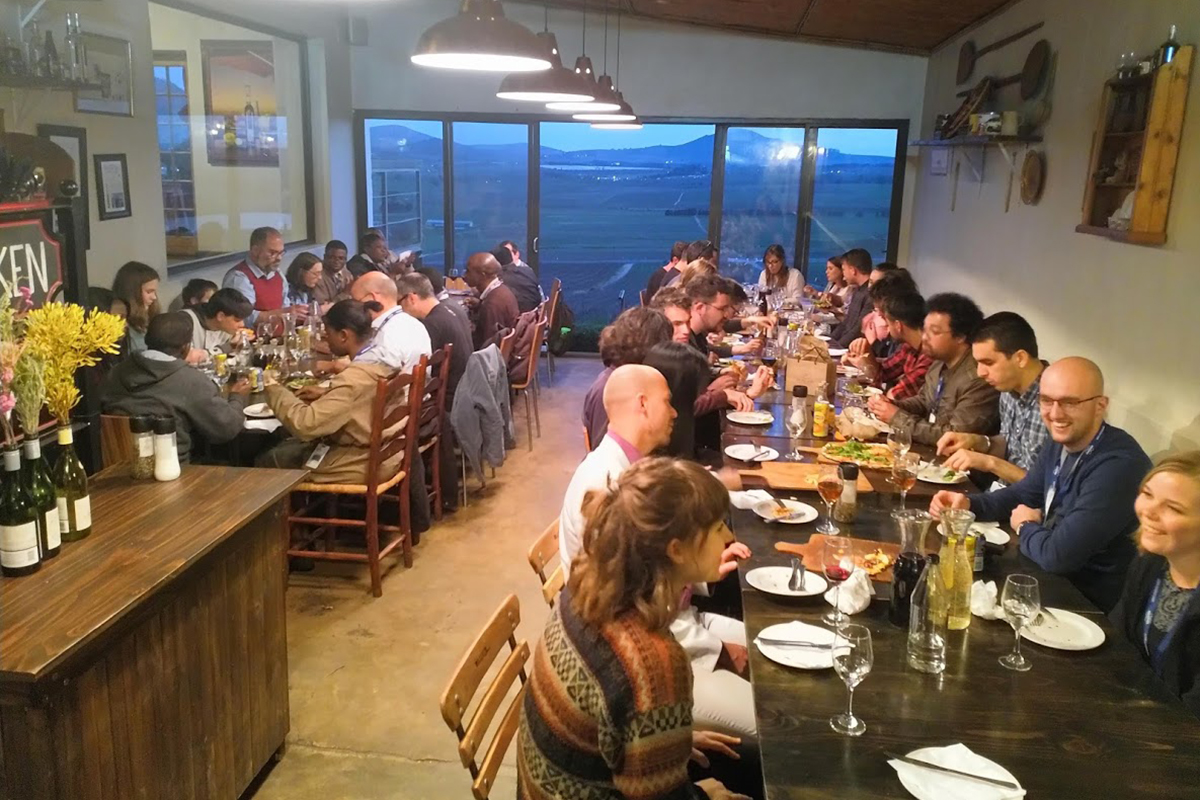 The Fifth European Crystallographic School (ECS5) was held under the auspices of the ECA, the IUCr and the South African Crystallographic Society (SACrS) in Stellenbosch, South Africa, from 8 to 14 July 2018. The school was attended by 86 participants, including 21 lecturers and tutors, from 13 different countries, primarily from Africa. The first part of the school, from 8 to 10 July, constituted an introduction to the fundamentals of crystallography, including symmetry, space groups, diffraction physics, crystallization and the theory behind data collection, structure solution and refinement. From 11 to 13 July the participants divided into two groups, one focusing on materials science and the other on structural biology.

The structural biology session included a visit to the University of Cape Town for a demonstration of the instrumentation housed in the Structural Biology group, as well as hands-on sessions on crystallization and structure solution and refinement. The materials science grouping also focused on hands-on sessions, covering topics such as the Cambridge Structural Database, structure solution and refinement, powder diffraction (including Rietveld refinement) and solution of twinned and disordered structures. There was also a demonstration of the Stellenbosch University diffraction equipment. On the final day of the school the two groups joined up again for a description of how to report crystallographic data, neutron diffraction and an overview of what crystals can be used for, followed by a final closing. 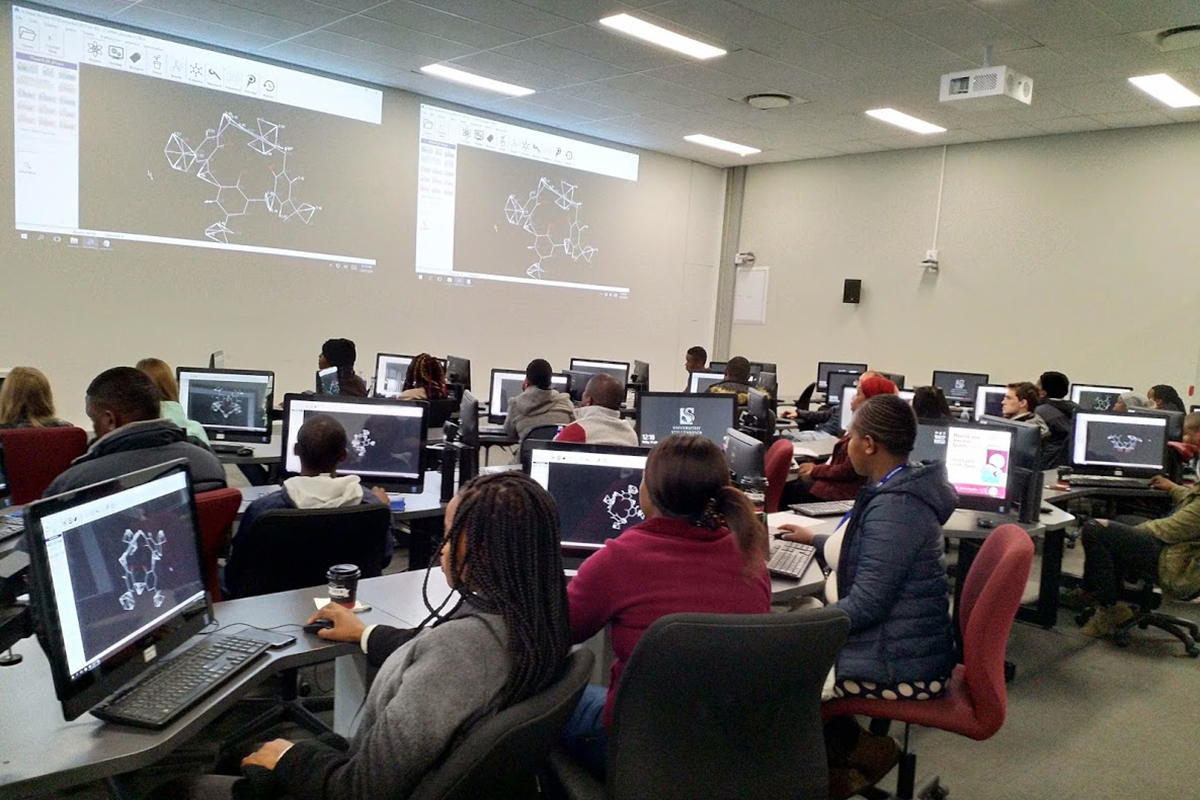 A hands-on session on structure solution.

The social aspects of the school were also not forgotten. On the opening evening of the school there was a well attended mixer to give students the opportunity to meet each other and the tutors and lecturers. On Wednesday afternoon there was an excursion to the wine estates Zorgvliet for wine tasting or Tokara for olive oil tasting and Spice Route, where the participants had a choice of wine, beer, gin, chocolate and charcuterie tastings. This was followed by dinner at the pizza restaurant on Spice Route wine estate. The farewell function on 13 July was a 'spitbraai' - lamb roasted on a spit - accompanied by a variety of local wines. 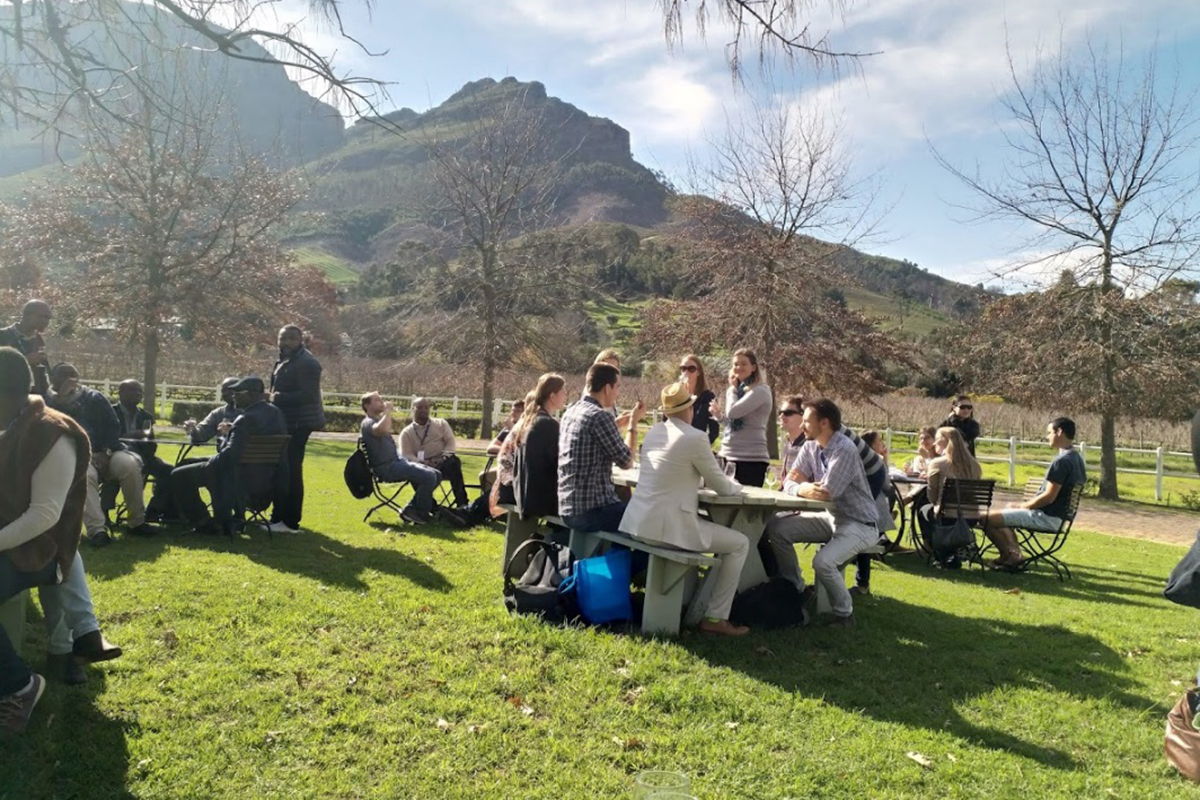 Feedback from the participants was positive. General feedback highlighted that many participants really enjoyed the hands-on experience gained at the school, and in fact would have liked more of this. The overwhelming feeling was that a school like the ECS should be a regular event in Africa. In this context it is worth noting that there were a significant number of registrants who were unable to attend the school despite being awarded a partial bursary, because they were unable to source the remaining funding required. This is perhaps an important point to consider when discussing the development of crystallography in Africa; the obstacles faced by researchers range from access to equipment (many participants would have liked to spend more time during the school using a diffractometer) to funding for research (some must buy research chemicals with their own money) to being granted a visa to travel within Africa. These points, among others, were highlighted at the summit in Bloemfontein during IYCr2014. Crystallographers in Africa will need to work together to address these problems. Meetings such as the upcoming Second Pan African Conference on Crystallography, as well as the efforts to promote an African Crystallographic Association, are exciting steps towards meeting these challenges.

Specific feedback from participants was also overwhelmingly positive, as Augustin Nana Nkwento of University of Yaounde, Cameroon, says: "My participation in the ECS5 at the University of Stellenbosch in South Africa was very beneficial for me". In particular, he found the opportunity to learn crystallography from eminent professors and analyse some crystals very valuable for his PhD study. He also enjoyed the chance to meet and exchange thoughts and ideas with new people from around the world. The ECS5 in Stellenbosch "was not just a school"; Augustin notes that he had a good time discovering the beautiful town of Stellenbosch and visiting the local wine estates. In short, "It was unforgettable". An enthusiastic local participant, Lisa van Wyk of Stellenbosch University, added "The ECS school was unprecedented in the manner that it brought together a variety of skills and knowledge in a setting in Sub-Saharan Africa. In addition, whenever scientists of different fields of specialisation meet there exists great potential for the sharing of unique expertise. Furthermore, it demonstrated that the South African community is in many ways on par with the international community, and we should seek collaborations amongst ourselves as well as abroad."

It is clear that ECS5 was a great learning experience for the participants, and also provided many valuable opportunities to interact with fellow researchers. The (tireless) organising committee are already discussing the organisation of future crystallography schools in Africa – keep an eye out for the first PACS (Pan-African Crystallography School) in the near future!

ECS5 was funded by a number of organisations, to whom we would like to express our sincere gratitude: the ECA, the IUCr, the Italian Crystallographic Association, the Cambridge Crystallographic Data Centre, the South African Chemical Institute, MiTeGen, Bruker, Malvern Panalytical, Crystal Growth and Design, Wirsam Scientific, SASOL, the Royal Society of Chemistry (Dalton Division) and CrystEngComm.