A diamond is not forever: crystals and changes at the Science Festival in Genoa, Italy 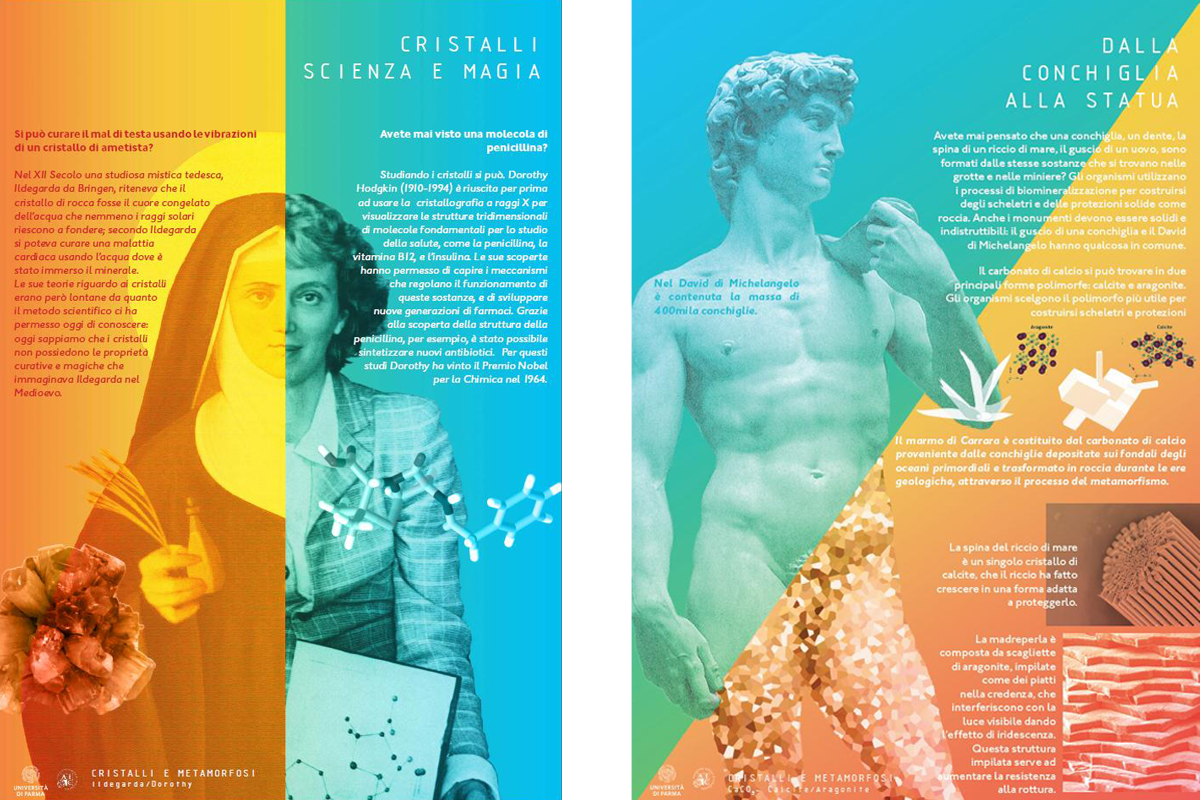 Boards showing the contrast between mystic Hildegard von Bingen and scientist Dorothy Hodgkin (left) and the metamorphosis of calcium carbonate from shell to statue (right).

The theme for the Science Festival in Genoa this year was ‘Changes’. That is quite challenging for those who study crystals, which are normally considered symbols of eternity (diamonds are forever, we are used to hearing). But crystallographers love challenges, and we organized the exhibition ‘Crystals and metamorphosis’, showing the beauty of phase transitions, polymorphism and metamorphism. Visitors enjoyed discovering the several forms of ice, the scary instability of diamonds contrasted with graphite (“I will bring you a pencil for our next anniversary” said a boy to his girlfriend), the transformations of calcium carbonate from shells to Michelangelo’s David, the story of tin pest, of chocolate bloom, and also the discovery that drugs may be polymorphic. The graphic layout was designed to highlight the idea of change between contrasting concepts. Along with crystal transformations, another kind of dualism was presented for people’s meditation: crystals between science and magic, and vision between science and literature. In the former, Hildegard von Bingen and Dorothy Hodgkin were paired to show the contrast between a mystical view of the universe and a scientific approach leading to discovery; in the latter, the vision of the structure of benzene by Kathleen Lonsdale and the beauty of the structure of londsdaleite were paired with the fantastic descriptions created by Italo Calvino in imagining the birth of crystals in a primordial world.

The exhibition was open between 25 October and 5 November 2018 at the Museo del Mare Galata in Genoa, and was organized by Alessia Bacchi and Paolo Mazzeo of the University of Parma (Dipartimento SCVSA and Sistema Museale di Ateneo), with graphic design by Valentina Manente and with the sponsorship of the Italian Crystallographic Association. The exhibition was supported by the IUCr and by the ECA.

Visitors were invited to write impressions and graffiti on two boards before leaving: we collected lots of hearts and diamonds; maybe some future Dorothys left their name here.