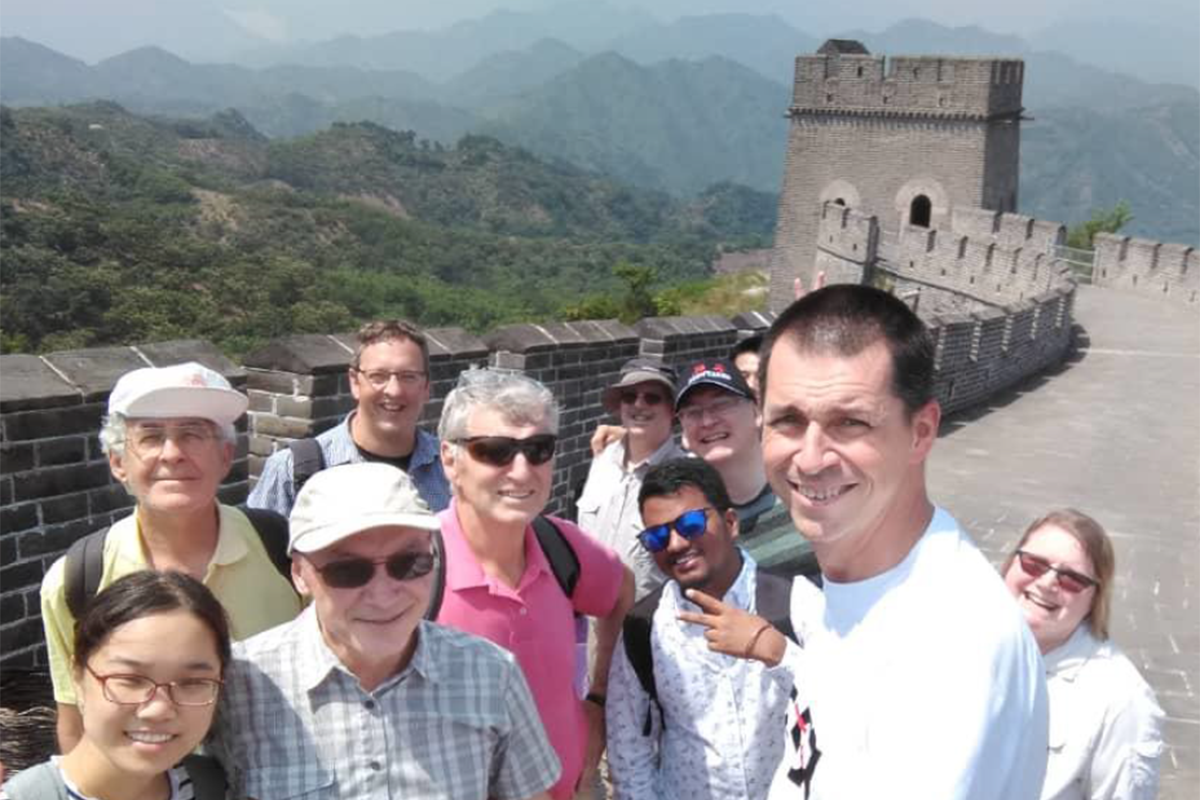 The eighth Zurich School of Crystallography (ZSC) pitched tent at Tianjin University from 17 to 28 June 2018 following an invitation by Professor Jay Siegel, Dean of the School of Pharmaceutical Science and Technology (SPST). The school was attended by 20 handpicked participants, 9 from the Tianjin area, 8 from various other parts of China, 1 from Hong Kong and 2 from Thailand. Of these, 2 are studying towards an MSc, 11 are PhD students, 2 are Postdocs and 5 are young academics. Seven of the long-time Zurich School tutors from the universities of Zurich, Bern, Prague, ETHZ and EPFL took up the invitation, namely Tony Linden, Olivier Blacque, Hans-Beat Bürgi, Lukas Palatinus, Michael Wörle, Bernd Schweizer and Gervais Chapius. Richard Cooper from Oxford University, Ian Williams from Hong Kong University of Science and Technology and Junliang Sun from Peking University completed the team, thereby ensuring our usual and popular 2:1 student:tutor ratio. The goal of the school is to equip each participant with enough theory and practice to be able to determine small-molecule organic and inorganic crystal structures and to recognize difficulties that require help from a more experienced specialist. The encounter of the mostly western teachers with the Asian students was both interesting and at times somewhat challenging, but in the end very rewarding.

The programme followed our well-tried format, usually with two hours of lectures followed by two hours of practical work during the mornings and afternoons. The participants had to solve at least three set structures and could then work on their own data set collected from a sample they provided. The specially selected set structures provide increasing levels of complexity. The first one is straightforward and allows the participants to learn the general procedure from structure solution through to a completed and validated structure report using the program package Olex2. The second one requires some chemical knowledge for proper atom assignment, while for the third one the chemist's guess of the structure is largely wrong and the actual molecular structure has to be found using a combination of chemical, crystallographic and geometrical logic and even databases. Examples involving severe disorder and solvent molecule handling were also demonstrated.

The SPST is well equipped with three recently installed Rigaku diffractometers: a Synergy-S and a XtaLAB Synergy Custom FR-X Rotating Anode system with two ports. In addition, we had access to a Rigaku SuperNova diffractometer at the School of Science, Tianjin University, thereby allowing the participants adequate opportunity to gain hands on experience with data collection procedures using their own samples. Yan Zier from Rigaku China was on hand to assist with the brand new instruments and his expertise was highly appreciated. Structure solution, refinement and analyses were done in a fully equipped computer room, which provided a workstation for each participant and tutor. 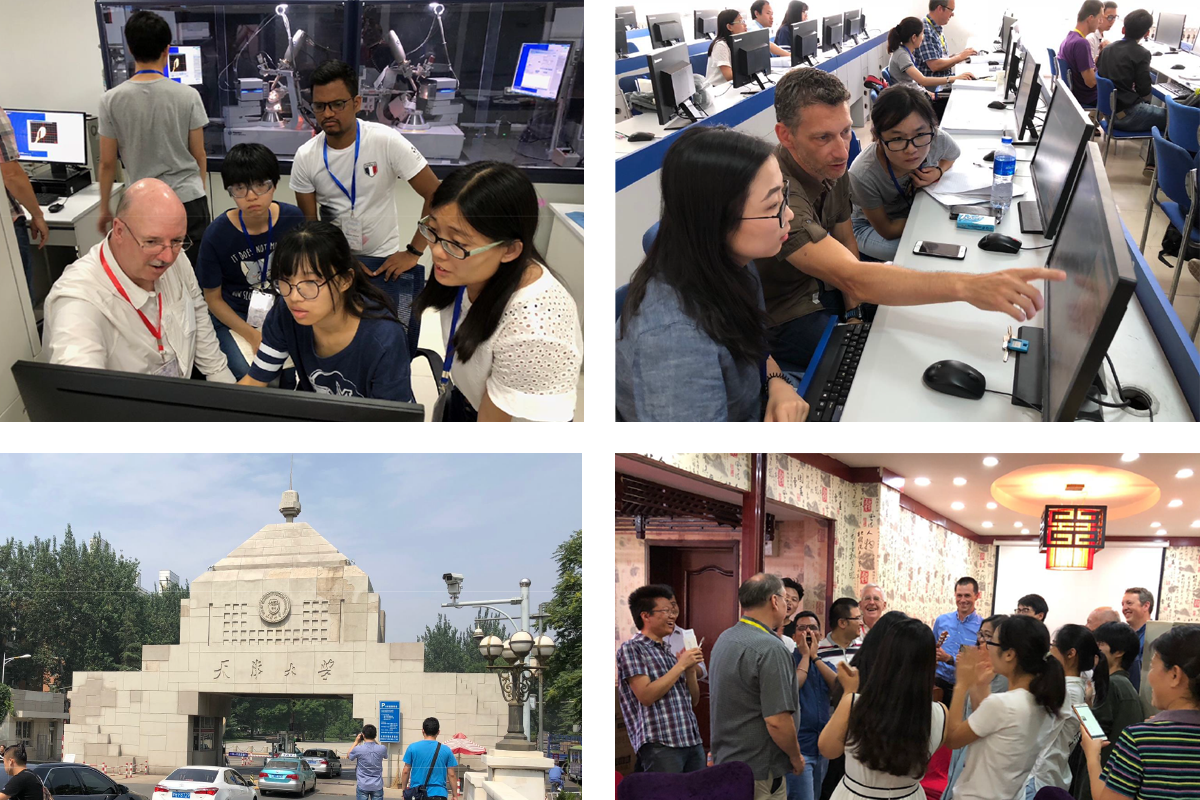 We found that the student-tutor interaction in China is somewhat more reserved than what we are used to in Zurich and this was particularly noticeable during the lectures. Although the participants spoke good English, their pronunciation sometimes needed getting used to. We also learned that the Chinese language has technical terms that are very different from the English ones and it was here that the help of our Chinese colleague Junliang Sun was invaluable, as he usually untangled communicative roadblocks with a single, short sentence in Chinese. Some of the lecturers felt at times that their message did not get through, but as the school proceeded it became increasingly clear that the participants understood enough of the lectures to be able to consult their Chinese text books and discuss the day's material together at the hotel in the evening. Thanks to the 2:1 format during the practical work, the interaction between the participants and the tutors became increasingly more relaxed. The very successful outcome of the final two-hour written exam showed how really hardworking everybody was. When Lukas Palatinus from Prague started playing the guitar after the final dinner, everybody joined into the singing and the two cultures had definitely merged into a single, merry group.

On the rest day, the tutors were taken to the Huangyaguan Pass section of the Great Wall and almost had the wall to themselves during the strenuous 2.2 km walk along the ridge and down to the river. It was a great experience. 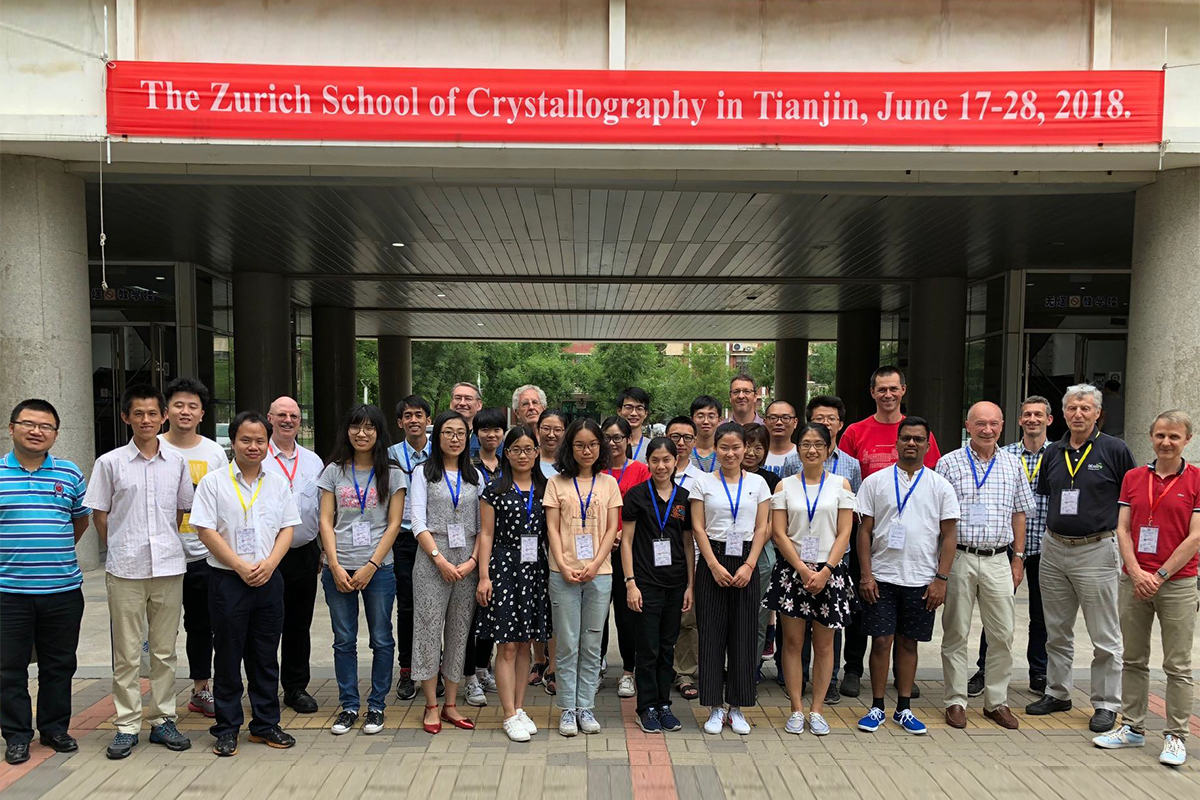 Professors Jay Siegel, Kim Baldridge and SPST made an enormous effort to provide a congenial atmosphere for the school and excellent accommodation. We are especially grateful to Jun Xu who did most of the local organization, including initial data collections and structure solving for the crystalline samples contributed by the participants, thereby ensuring that they did not have to work on didactically unsuitable structures. Without the efforts of Ying Wei, the Europe-China communication, transportation and visa arrangements would have been significantly more difficult. Vice Dean Zhou Yan acted as the local coordinator and organizer. The directors and local organisers very much appreciate the willingness of the tutors to undertake this adventure. Tianjin University, The Health Sciences Platform of Tianjin University and Rigaku Oxford Diffraction supported the school financially. We also wish to thank the Cambridge Crystallographic Data Centre and the Fachinformationszentrum Karlsruhe for permission to access their databases during the school, plus the IUCr for access to International Tables Online. Last but not least, the tutors are very grateful to the volunteer students who accompanied them between the hotel and the university and made sure that we did not get into difficulties in a country where we knew only a handful of words. Xiè xiè!

Report from a participant

The Zürich School of Crystallography (ZSC), 2018 in Tianjin was a great surprise for Chinese scholars. I would say joining this school is one of the best things I’ve ever done. I can feel how considerate ZSC is. We had a Chinese tutor this year for dealing with language issues, which turned out to be a very wise and helpful decision.

The tutors were kind, patient and knowledgeable. What impressed me most was their open-mindedness and enthusiasm towards a new culture. They adapted themselves very quickly to China’s environment by learning Mandarin and gestures, using WeChat and climbing the Great Wall in Tianjin. 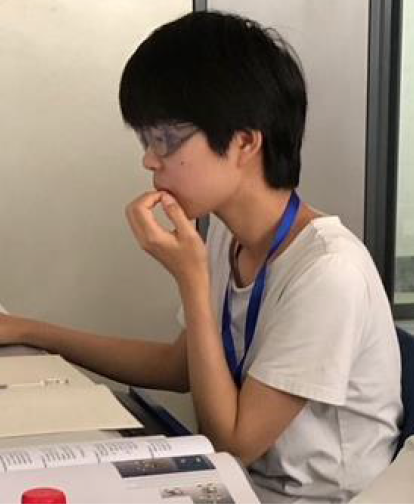 Another thing to be mentioned is the 2:1 student:tutor combination, which is the most beneficial and effective part of this course. Chinese students tend to keep quiet in discussions, which may be inefficient for feedback and interactions. But within a small group, I felt free to ask whatever I wanted. Meanwhile, my tutor would try his best to answer my questions, no matter how trivial or how strange they were.

The ZCS covered everything I could imagine about crystallography, from fundamental backgrounds to the practical operation of solving structures, including the introduction of instruments and the output of the final report. No wonder how intense it is! Fortunately, the theoretical concepts were repeatedly taught during the whole course and externalized in practical session. I have a systematical map in my mind with more confidence and ability to work on crystals after the school.

I had a great time during the school, where I met many people from around China and made two friends from Thailand. The final banquet was full of joy and music; I enjoyed it very much.

In the end, I appreciated everyone who contributed to this school and made it so successful and meaningful. I strongly recommend ZCS to anyone who is interested in this area. This will be a good opportunity to immerse yourself in the ocean of knowledge.

If you are interested in the next Zürich School of Crystallography, which will take place at the University of Zürich, Switzerland, from 16 to 27 June 2019, please go here.