As India hosted its first ever IUCr Congress from 21 to 28 August 2017, Anthony Addlagatta and I, as organizers of the satellite meeting Phasing and Model Building, proudly claim to have left no stone unturned. The 1.5 day meeting had lectures and tutorials on relevant subjects and took place with the cordial hospitality provided by S. Chandrashekar, the Director of the Indian Institute of Chemical Technology (IICT), Hyderabad, at the premises of the Centre for Chemical Biology. We thank him immensely; without his support it would not have been possible to make this event a no registration fee meeting for all our participants. 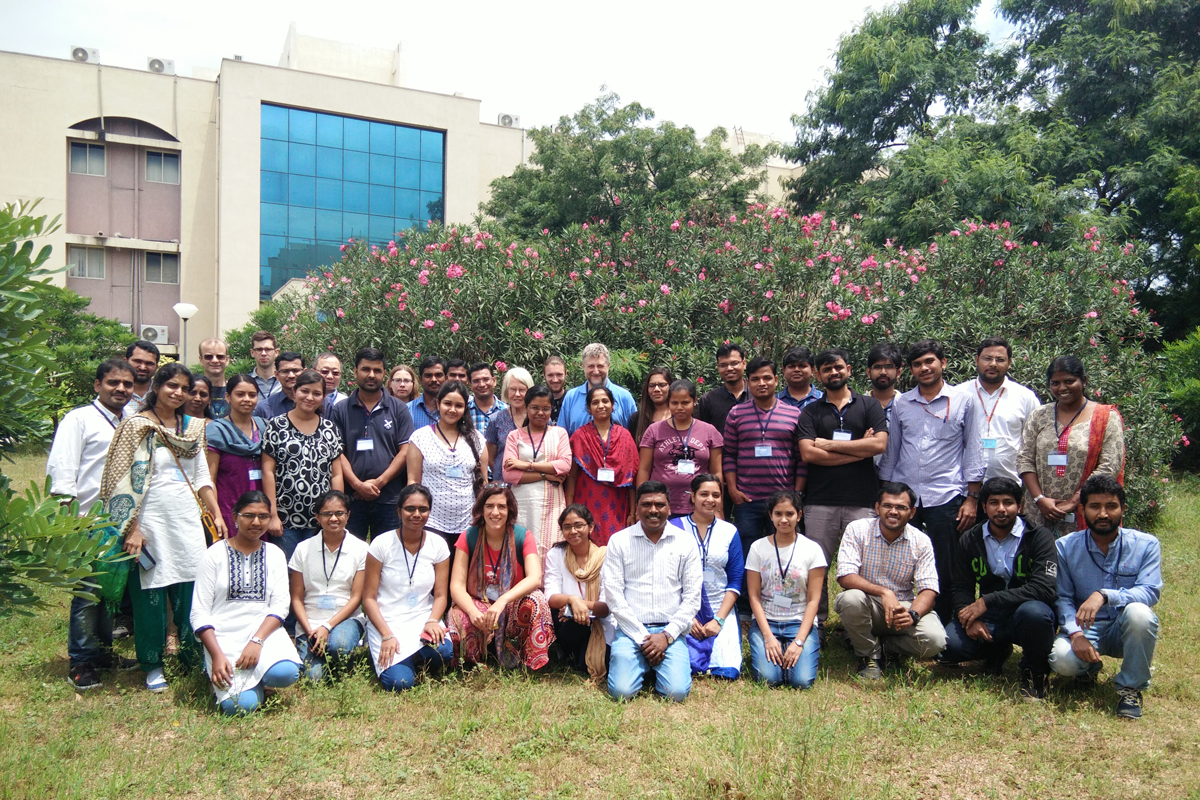 We also thank Tom Terwilliger (Los Alamos National Laboratory, USA) and Charles Ballard (STFC Rutherford Appleton Laboratory, UK) who promptly and enthusiastically accepted our invitation to organize such an event and came up with a programme and suggestions for the tutor team. We had Eleanor Dodson (University of York, UK), Hung Li-Wei (Los Alamos National Laboratory, USA), Dorothee Leibschner (Lawrence Berkeley National Laboratory, USA), Claudia Milan Nebot (Molecular Biology Institute of Barcelona, Spain), Felix Simkovic (University of Liverpool, UK) and Sravya Mounika Kantemneni (EMBL Hamburg, Germany) as tutors, a good scientific mix from the USA and Europe. Together, we had a package of molecular replacement, CCP4, Coot, phasing methods for X-ray and EM, and tools for model and ligand building for this meeting.

On 20 August, we started with Professor Dodson discussing the essential elements of molecular replacement, followed by Dr Terwilliger who gave a lecture on phasing with PHENIX. Dr Nebot then discussed a rather new program, ARCIMBOLDO, which could be used for fragment-based ab initio macromolecular phasing. Dr Simkovic discussed integration of bioinformatics with structure refinement using MrBUMP, AMPLE and SIMBAD. Dr Ballard later lectured on aspects of the CCP4i2 and Coot programs. Dr Leibschner closed our lecture session with a discussion of Polder maps and their application in improvising ligands with low electron density.

The programme had an equilibrium in terms of the scheduled lectures and break times, which was appreciated by the participants who were recommended to bring their own laptops with the required software installed and also bring any data that they would like the tutors to help them with. Restricting the number of participants to 30 was evidently helpful to facilitate one-to-one discussions throughout the meeting. On the first day, Dr Ballard and Professor Dodson eagerly helped students with tutorials on molecular replacement and Coot until around 22:30, after dinner. The morning of the 21st started with Dr Terwilliger discussing phasing in the context of cryoEM, post breakfast. This was followed by Ms Kantamneni's tutorial on new ARP/wARP workflows for phasing and model building. The workshop ended with Dr Li-Wei, Dr Terwilliger and Dr Leibschners' tutorials on various aspects of phasing and the generation of Polder maps.

We had an overwhelming response from many principal investigators (PIs) across India. We had earlier identified little more than 100 PIs involved with protein crystallography in India and sent out invitations encouraging nominations of one student per laboratory. We thank all the PIs for having understood our constraints and complying with us. We extend very many thanks to all participants for the success of the event, exemplified by their positive feedback. If they thought anything could be improved it was more time with the tutors and more modules. We thank all the members of the AA (Anthony Addlagatta) lab for helping us with organizing accommodation, food and logistics. Together, we had a great time learning about methods in phasing and model building, which would not have been possible without the IUCr2017 Congress. We do hope to conduct other meetings and workshops at IICT, which would constructively help the Indian crystallography community to bridge science and expand horizons.

This satellite meeting, which took place at CSIR-NCL, Pune, India, on 29-30 August 2017, addressed issues in the fields of natural and social sciences that concern the countries in and around India.

Gautam Desiraju (Indian Institute of Science, Bengaluru, India) gave a talk entitled 'Science and Society. What do they owe each other?' He began by saying 'Science is objective and scientists should be neutral, impersonal, dispassionate and far from the madding crowd. Scientists will not be concerned with politics if their science is to be pure and environmentally relevant. Science is about real life'. He quoted John Desmond Bernal's statement, 'Science is an integral part both of material and economic life and of ideas which guide and inspire it'. Desiraju asked whether scientists should be influenced by societal and political pressures that swirl around them. He asserted that scientists should lead society as the custodians of higher values including truth, justice and respect for human diversity and culture. The world is peopled by winners and losers, and scientists are among the winners. We are educated, financially advantaged and have opportunities that are denied to most others. We have the potential to excel in our professions. This privilege comes with a responsibility; scientists owe it to the society around them to provide guidance, leadership and moral stature. They become the role models for others. Desiraju said 'Good science is about morality and ethics'. He talked about the scientific ego or scientific narcissism and how it influences the scientific profession. Concluding his talk he put forward a quote by Nagarjuna, the Mahayana philosopher, who said 'For the sprout does not exist in the seed which is its cause; it does not exist in each one of earth, water, fire, wind and so forth, which are agreed to be its conditions; it does not exist in the combinations of conditions, nor in the combination of causes and conditions, and it does not exist as separate from these, free from causes and conditions'. To then define what the sprout is, is the essence of consciousness, or a lower-level complex phenomenon such as the crystalline state. 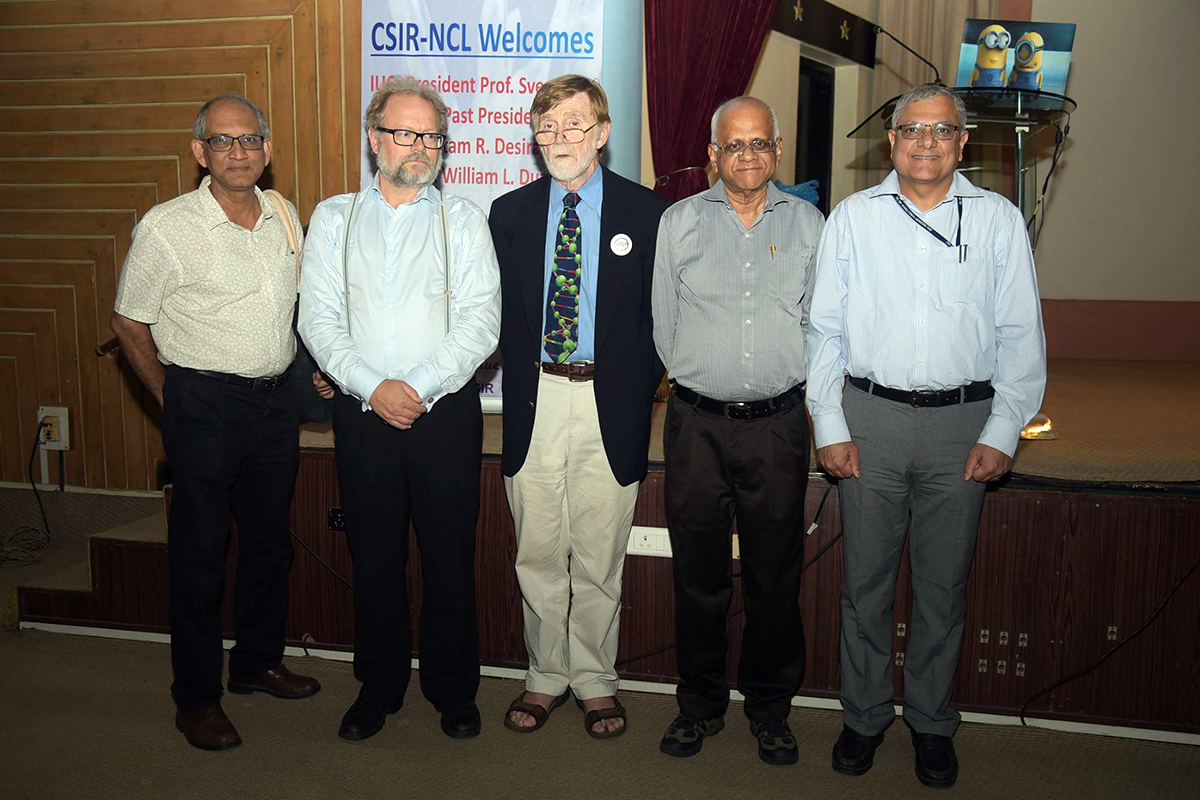 William L. Duax (Hauptman Woodward Medical Research Institute, Buffalo, NY, USA) gave a talk on 'Genomics, Crystallography, Bioinformatics, Molecular Evolution, and Drug Design'. He presented information about the International Gene Bank, three billion years of evolution of the sequences of superfamilies of known and hypothetical proteins, and why we need to develop methods to determine the functions of all of the proteins in our environment in order to design drugs without 'side effects'. He talked about proteomics, the determination of a reliable evolutionary tree of all species on earth, and identifying the last universal common ancestor of all cellular species. J. J. Vittal (National University of Singapore) described 'Crystallographic Activities in and around Singapore'. In his talk entitled 'Science gazing, standing on the shoulders of crystals', Pinak Chakrabarti (Bose Institute, Kolkata, India) discussed the theory and practice of crystal growth. He explained how additives induce sodium chloride morphology modifications and described a practical approach to produce near-spherical common salt crystals with better flow characteristics. He described crystallographic applications in archaeology, forensics, art and drug design. He cited the work of renowned woman crystallographers including Rosalind Franklin, Ada Yonath and Kathleen Lonsdale.

In his talk 'Crystallography and Society in South Africa and throughout Africa', Andreas Roodt (University of the Free State, Bloemfontein, South Africa) discussed the BRICS nations, academic and industrial science, and African initiatives. He discussed applications of crystallography to radiopharmaceuticals, homogenous catalysis, separation technologies and utilization of carbon dioxide. He was optimistic about networking among African scientists. Sven Lidin (Lund University, Sweden) asked 'Does crystallography blind us with its images?', and B. Chandrasekharan (CSIR-Central Leather Research Institute, Chennai, India) threw light on the subject 'Capacity Building in Industrial Research – Emerging Roles of CSIR'. Amitava Das (CSIR-Central Salt and Marine Chemicals Research Institute, Bhavnagar, India) spoke about 'Salt and its opportunities in India'. He discussed sources, large-scale production, availability, consumption, purity and the cost of salt in India. He talked about the future distribution of salt in India and the world. G. Thyagarajan (Zaheer Science Foundation, New Delhi, India) spoke about the 'Science-Based Economic and Social Development: Presenting a Fresh Approach to Reach the Unreached in the Global Society'.

In his closing talk 'Science outreach to society by CSIR-NCL', Ashwini Kumar Nangia described crucial technologies developed by the scientists from CSIR-NCL that benefit society. He cited examples of water filtration units, oxygen enrichment units and immersion of Ganesha idols in an eco-friendly way.