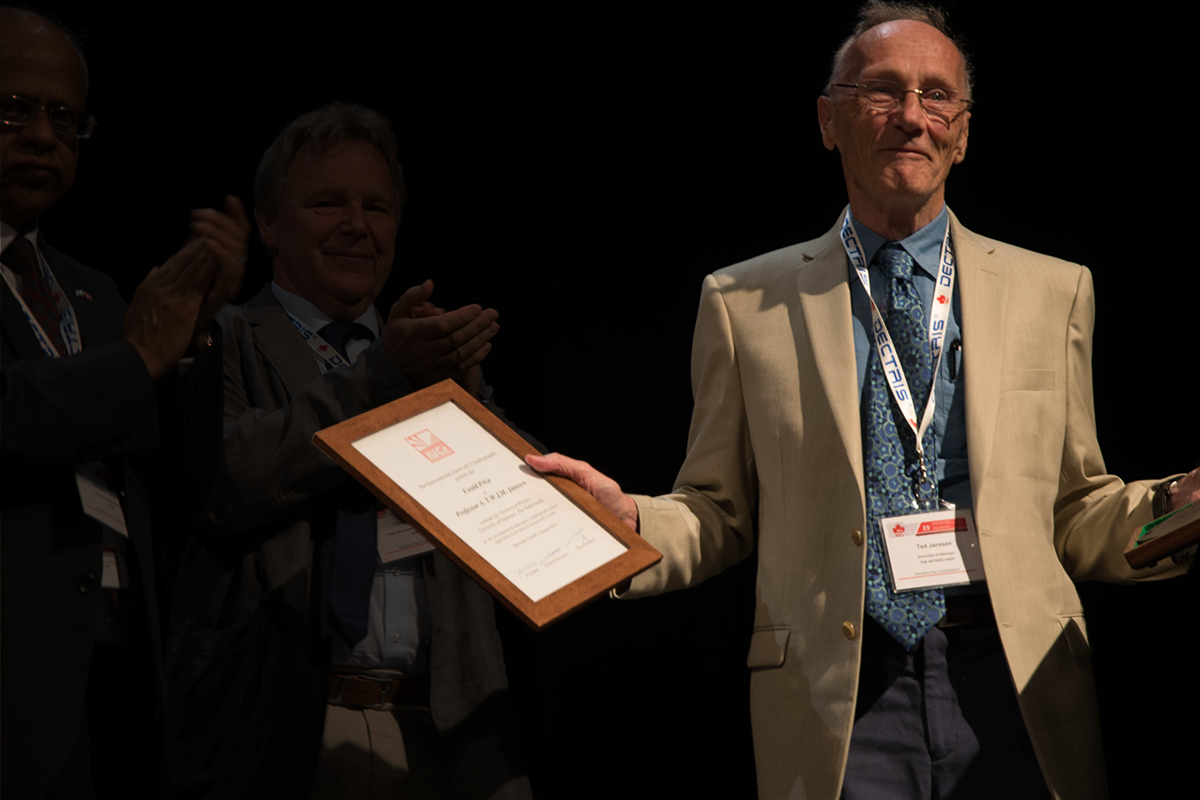 Theo Willem Jan Marie (Ted) Janssen passed away on 29 September 2017 in Groesbeek. He was born on 13 August 1936 in Vught, near 's-Hertogenbosch. Together with Pim de Wolff and Aloysio Janner he was one of the founding fathers of N-dimensional crystallography, more specifically of the superspace approach, in which structures with sharp diffraction peaks but lacking three-dimensional lattice periodicity are indexed using N > 3 indices.

After studying theoretical physics in Utrecht, graduating under Leon van Hove, he met Aloysio Janner in 1965 and became his first PhD student at the Radboud University in Nijmegen (then still called the Catholic University Nijmegen). He finished his PhD thesis, Crystallographic Groups in Space and Time, in 1968, thereby providing the theoretical basis of what would become the superspace approach. In 1972, he was appointed as an Associate Professor in Nijmegen and became promoted to full Professor of Theoretical Physics in 1995.

Ted's PhD thesis already showed his deep understanding of the mathematics underlying the symmetry analysis of physical structures. For example, he applied abstract cohomology theory to describe space groups as group extensions of the translation subgroup by the point group and it is not surprising that (besides acknowledging, for example, the support of Edgar Ascher) Ted thanks several mathematicians for helpful discussions. This clearly illustrated Ted's truly interdisciplinary scientific position, interacting with physicists as easily as with mathematicians and materials scientists.

At the IUCr Congress in Kyoto in 1972, Ted and Aloysio Janner met Pim de Wolff from the Delft University of Technology, who presented his work on incommensurately modulated crystals, which he proposed to describe in a four-dimensional space. They recognized that the corresponding four-dimensional symmetry groups were precisely the same as the space-time groups occurring in their own work, and from then on the three joined forces to generalize the superspace approach to other aperiodic structures such as composite structures and quasicrystals (which were discovered in 1982). The groundbreaking importance of the superspace approach was acknowledged by the award of the Aminoff Prize of the Swedish Academy of Science to Ted, Pim de Wolff and Aloysio Janner in 1988 and the Ewald Prize of the IUCr to Ted and Aloysio in 2014. Their contributions were also explicitly mentioned when the Nobel Prize for Chemistry was awarded to Dan Shechtman in 2011 for the discovery and description of quasicrystals.

From Ted's appointment as a staff member in Nijmegen in 1972 onwards, he and Aloysio created a strong group in solid-state physics, including experimentalists but also reaching far into the mathematics department. The interdisciplinarity of the group corresponded to the impressively broad range of research topics to which Ted made substantial contributions. On the one hand are his famous publications on the mathematical description of quasicrystals, on the other hand one finds his work in collaboration with experimentalists, looking at vibrational modes of phonons, phason modes (in relation to sliding modes and frictionless motion) and the analysis of phase transitions in aperiodic structures (with original publications as late as 2011).

Ted's research articles show an extraordinary combination of clear style and precision. Listening to his scientific talks was always a pleasure and his eagerness to share his knowledge made him an inspiring lecturer, giving well received courses on a broad range of topics including quantum mechanics, chaos theory, mathematical physics and group theory. Some of his excellent syllabi were adopted by his fellow lecturers and have even been in use at Radboud University long after Ted's retirement. His monograph Crystallographic Groups is still one of the best resources on this topic, both covering the mathematical background with the required precision and demonstrating its application to real physical phenomena.

Ted served the scientific community in various roles, including as an editor (he was a Co-editor for Acta Crystallographica Section A from 1993 to 2002), as a reviewer and as Chair of IUCr ad hoc Commissions on Nomenclature. In 1996, he submitted a proposal for a Volume A2 of International Tables for Crystallography, devoted to N-dimensional crystallography. Although this volume was never realized, the content of the proposal is remarkable, as it suggested a computer-based approach, generating the requested information by a collection of algorithms from a database of stored information. The ideas in this proposal have since been realized in the Bilbao Crystallographic Server.

During the restructuring of the Faculty of Science at Radboud University, Ted played an active role in setting up a group on Theoretical Condensed Matter within the newly founded Institute for Molecules and Materials (IMM). Even after his retirement, he was frequently present at the Institute's seminars, and was always ready to help with scientific questions or requests and happily gave talks himself.

Besides his scientific interests, Ted was very interested in the arts, enjoying literature, the visual arts and especially music. Throughout his life he took great pleasure in playing the piano, harpsichord and cello.

We have lost a great colleague and we will honour his memory if we keep our scientific interests as broad, multi-layered and interdisciplinary as Ted's were.