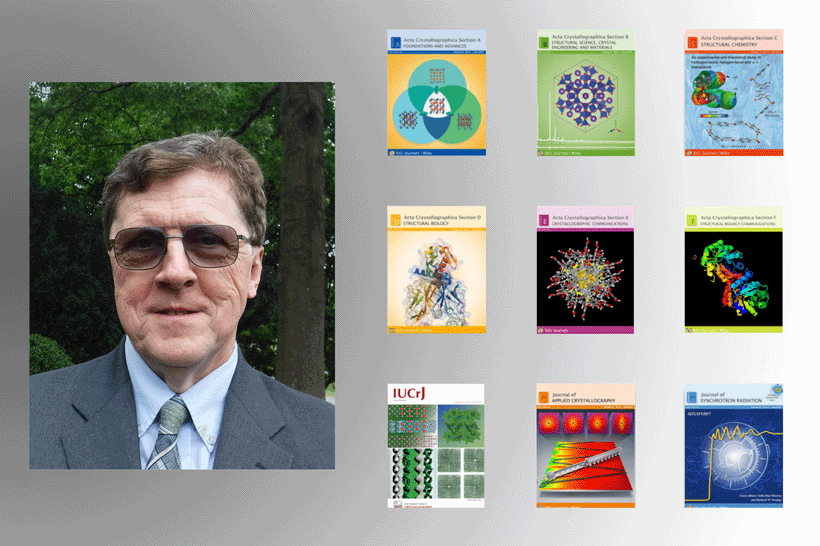 We are pleased to announce that Andrew Allen has been appointed as the Editor-in-chief of IUCr Journals. From mid-September 2018, Andrew will be replacing Samar Hasnain, who has completed his six-year term at the helm. We would like to take this opportunity to express our deep appreciation to Samar for his dedicated work and unstinting enthusiasm in developing IUCr Journals, increasing their impact factors, and for launching our flagship journal, IUCrJ.

Andrew is a long-time physicist working in materials science, neutron and X-ray scattering at the US Department of Commerce's National Institute of Standards and Technology (NIST), Gaithersburg, MD, USA. His editorial connections with the IUCr extend back to 2002 when he first became a Co-editor of the Journal of Applied Crystallography (JAC). He became its Deputy Editor in 2011, and one of JAC's Main Editors from 2014. During this time, he has acted as Guest Editor for several JAC special issues. Previously, he has also served on the Editorial Advisory Board of the Journal of Physics: Condensed Matter from 1991 to 1996. Andrew's other main connections with the IUCr have centred on the IUCr Commission on Small-Angle Scattering, of which he has been a member or consultant since 2002, and Chair from 2011 to 2014, the triennial conferences on small-angle scattering (SAS), where he has been active on several organizational or advisory committees, including microsymposia organization and other SAS-related activities, at most triennial IUCr Congresses since 1996 (Seattle). He had already agreed to serve on the International Programme Committee for the IUCr2020 Congress in Prague. Previously, Andrew has served as Vice-Chair and Chair of the ACA's Special Interest Group on SAS in 2000 and 2001.

Andrew's PhD research between 1978 and 1981 was under the supervision of Keith Ross at the University of Birmingham, UK, working on the development and application of image-based small-angle neutron scattering (SANS) methods primarily for the microstructure characterization of nickel-based superalloys. Andrew then joined the UKAEA Harwell Laboratory, and his work focused on the development of neutron-based scattering and diffraction materials characterization methods for industrial applications. In this connection, he was a co-author in 1981 of the first research paper on neutron diffraction residual stress measurements. During his time at Harwell, Andrew applied neutron scattering methods, mainly SANS and neutron diffraction, to address a broad range of industrial materials problems, and he started what has become a lifetime research interest in the fundamentals of cement hydration. During a 1988-1989 sabbatical at Northwestern University, Evanston, IL, USA, focused mainly on neutron-based studies of precipitation phenomena in ultra-high strength steels, Andrew was introduced both to the capabilities of X-ray synchrotron facilities and to his future home institute: NIST.

In 1991, initially through a collaboration with the University of Maryland, College Park, MD, USA, Andrew moved to the USA and has been at NIST ever since. At NIST, Andrew has concentrated on microstructural research on advanced materials in support of US Government programmes and industry, together with the development and application of novel neutron and X-ray scattering methods needed for these studies. Among these has been the development and extension of a theoretical formalism for multiple SANS (MSANS) and the development of rapid combined ultra-small-angle X-ray scattering (USAXS), small- and wide-angle X-ray scattering (SAXS and WAXS) capabilities at the US Department of Energy's Advanced Photon Source (APS) at Argonne National Laboratory, IL, USA. Andrew's work has included extensive microstructure-based research on ceramic coatings, porous ceramics, cement hydration and particulate systems, fuel cell materials, nanoparticle systems for biomedical applications, environmental health and safety, porous sorbent materials (including metal-organic frameworks but also porous rocks) for selective gas adsorption, and additive manufactured alloys. These studies have involved SAXS and SANS, neutron and X-ray diffraction studies of heterogeneous materials, as well as X-ray photon correlation spectroscopy (XPCS) for studies of material dynamics. Another component has been SAXS measurements and documentation for new NIST Reference Materials, especially gold and silver nanoparticle suspensions, and the lead role in certification measurements for the glassy carbon SAXS intensity calibration Standard Reference Material, SRM 3600. Over the years, Andrew has received four US Department of Commerce Awards and, despite not working at an educational institution or at a major facility beamline, he has managed to train some 20 students and postdocs in various crystallographic methods for the characterization of materials and materials phenomena.

Andrew Allen has indicated he feels greatly honoured to be appointed the next Editor-in-chief of IUCr Journals, and in particular to succeed John Helliwell, Gernot Kostorz and Samar Hasnain in this position, all of whom he has had the pleasure to work with during his time as Co-editor, Deputy Editor and Main Editor of JAC. As is well known, scientific journal publishing is facing a rapidly changing business environment, but Andrew looks forward to facing these challenges and opportunities over the coming months and years in his new role as Editor-in-chief.