This microsymposium covered a wide range of topics in materials science, with a focus on the close relationship between dynamics phenomena and material functionalities. Five speakers, two invited and three contributed, presented recent theoretical or experimental studies on iron-oxo complexes, magnetic multilayers, ionic conductors and lithium-ion battery materials, using inelastic X-ray scattering or inelastic neutron scattering techniques. Each presentation highlighted the importance of these techniques when investigating the spin and electronic states, proton transport and molecular vibration, together with examples of applications to related functional materials. Among them, notable research has been presented by Guo from Carnegie Mellon University, revealing the vibrational signatures of Fe=O moieties in three different oxidation states (FeIII, FeIV and FeV). This result, obtained by 57Fe nuclear resonance vibrational spectroscopy, leads to a deeper understanding of the intrinsic reactivity of the Fe=O moiety in iron-oxo complexes. An audience of about 25 joined this microsymposium to exchange ideas and shared a common perspective of inelastic scattering techniques for functional materials research.

This is an emerging and broad research field with numerous applications, a number of which were presented during this session. The first speaker, Maxim Bykov (Bayreuth, Germany), presented single-crystal XRD data measured from samples of sizes normally considered to be powders. He and his coworkers synthesized (in DAC under high pressure up to 135 GPa and temperatures up to ca 2700 K) and structurally characterized four novel iron nitrides: Fe3N2, FeN, FeN2 and FeN4. The second speaker was a young student, Yuka Deguchi (Tsukuba, Japan), who presented details of careful multi-temperature (up to 800 K) and pressure (DAC, up to 3.58 GPa) powder studies of charge density for diamond. Next, Boris Zakharov (Novosibirsk, Russia) presented his contribution on the high-pressure studies of the influence of mechanical effects on chemical reactions such as UV or visible light-induced photoisomerisation of CoII complexes and high-pressure dehydration of a series of rare-earth element hydrated oxalates. The authors related bulk compressibilities, anisotropic lattice strain on hydrostatic compression and associated changes in the atomic coordinates to corresponding transformations upon heating or irradiation by light including high-pressure in situ reactions. A very impressive contribution on in situ stability of carbonates in the presence of mantle phases was presented by Karen Appel (XFEL, Schenefeld, Germany). Karen and her coworkers studied reactions between Sr and REE-containing carbonates and relevant mantle phases (olivine, enstatite, wadsleyite and perovskite) at high pressure and temperature using synchrotron radiation in a laser-heated diamond anvil cell. Single point XRD patterns recorded during heating allowed them to observe the transformation of the starting silicates to bridgmanite (+ MgO in the cases of olivine and wadsleyite starting materials). The session was concluded by review of experimental possibilities at the newly opened high-pressure diffraction beamline 'XPRESS' at Elettra synchrotron at Trieste presented by Andrea Lausi (Elettra Sincrotrone Trieste, Italy). This session has shown that, although still in its infancy, accurate high resolution studies at high pressure is an emerging field of interesting studies with a wide variety of technical developments and a broad range of new scientific applications.

After the paper by Kim et al. in Sci. Rep. (2012), lead halide perovskites took center stage in the field of photovoltaics thanks to their excellent performances. However, in the past five years the efficiency race most often prevailed over a definite understanding of the fundamental properties of these materials. Now, while the race is still ongoing, increased attention is being devoted to filling this gap, as confirmed by the lively talks of MS-088. The surface transformation of MAPbBr3 (MA = CH3NH3) single crystals exposed to ambient conditions was visualized by M. Banavoth (India), who related the surface restructuring to the photocurrent degradation. On MAPbBr3 perovskite, A. R. S. Kandada and A. Petrozza (Italy) investigated the recombination dynamics of photo-generated carriers in the frame of a wider study into the role of defects in the photo-excitation dynamics in lead halide perovskites. The use of neutron total scattering and reverse Monte Carlo modelling was used by J. Liu et al. (UK) to study phase transitions and reveal local atomic motions in CsPbI3 and MAPbI3, while the interest in CsPbI3 was confirmed by S. Seth who described the preparation of nanocrystals with different shapes and sizes. Finally, novel hybrids based on the layered perovskite framework were discussed by S. K. Abdel-Aal (Egypt), who reported on materials obtained by alternative alkyl ammonium groups and replacing Pb with Mn, Cu, Co or Bi.

MS-122: Crystallography of materials for energy 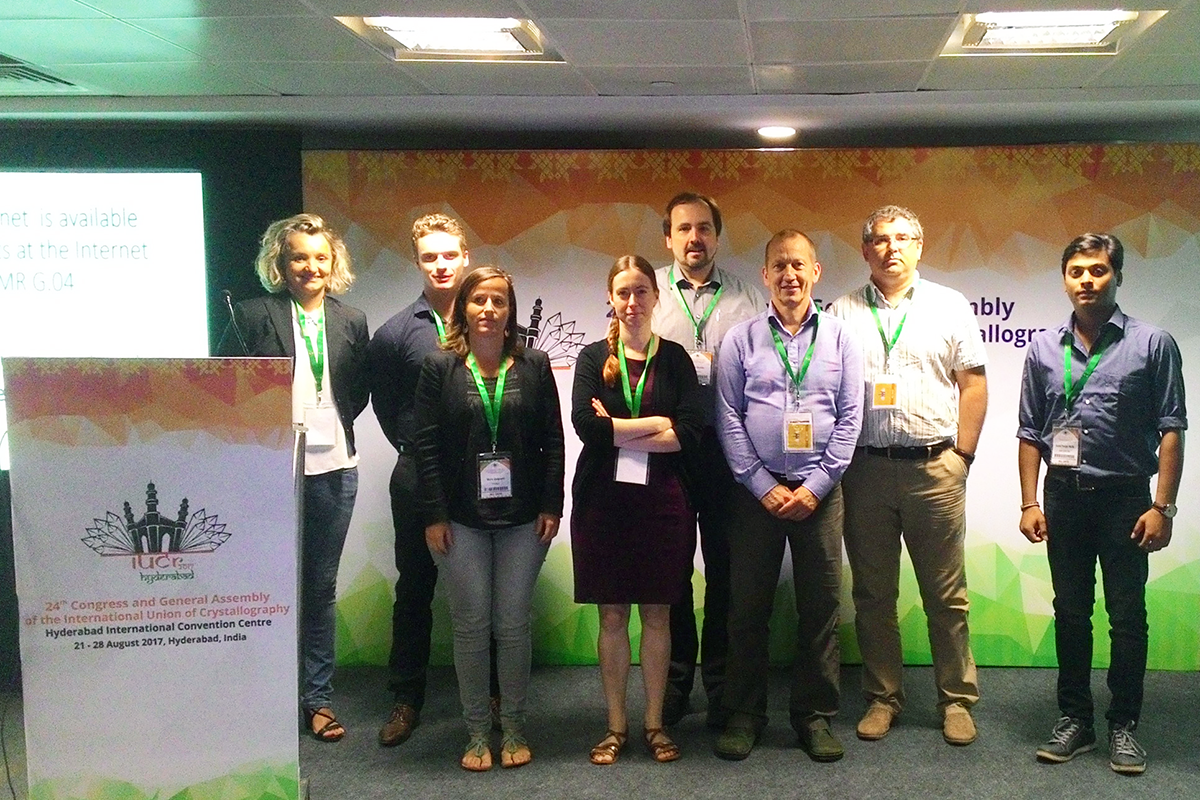 This microsymposium showed that the broad spectrum of crystallographic methods can significantly contribute to almost all relevant classes of materials. On the last afternoon of the congress, the microsymposium attracted a large audience and there were more questions than time allowed for answers. The talks were lively and the speakers did not hesitate to call their results 'cool' and 'weird'. Subjects ranged from battery materials and photovoltaics to zeolites for energy storage and nuclear fuels. Most speakers reported on combined methods for structure determination, e.g. neutron and X-ray diffraction in synergy with XAS in order to elucidate disorder in lithium manganese titanates (Siegbert Schmid). TEM methods also played an important role, e.g. concerning the analysis of materials for solar cells (Joke Hadermann).

MS-089: Chemistry and physics of modulated and composite crystals 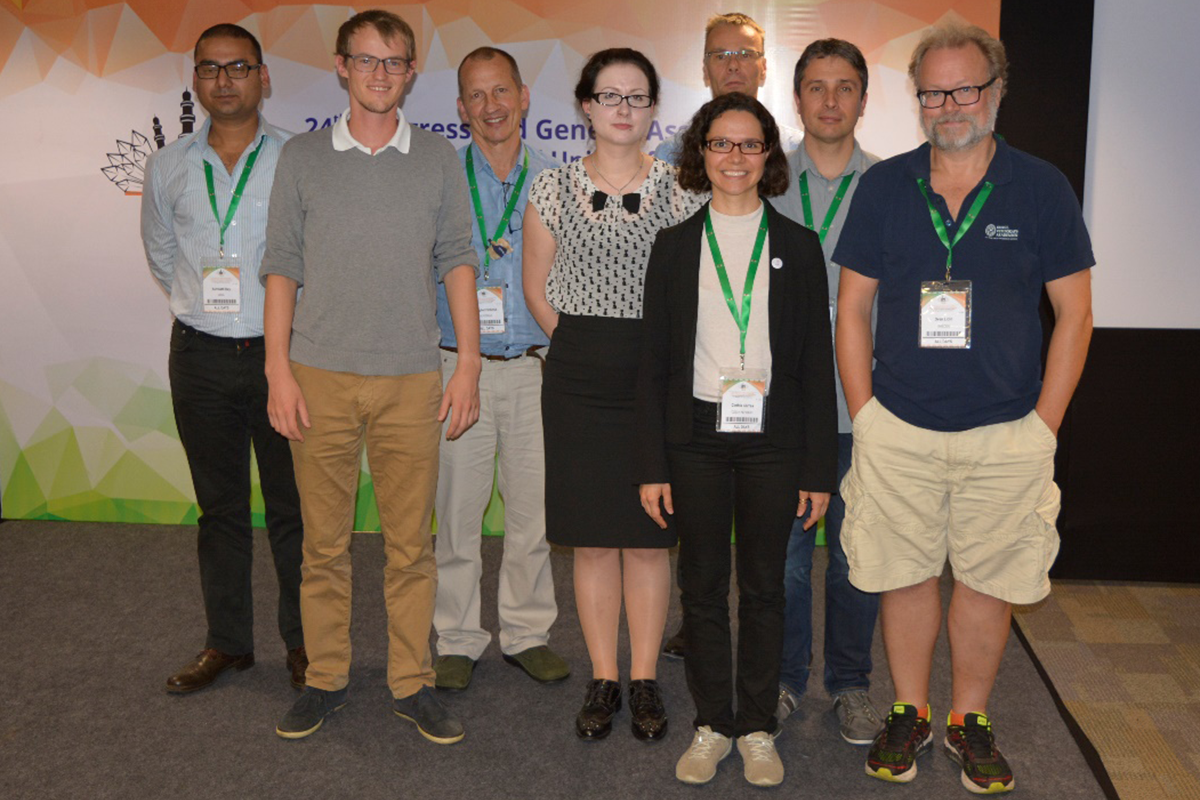 Up to 90 attentive listeners gathered to attend six excellent presentations on recent results on modulated and composite crystals. The scope of the microsymposium was deliberately broad and a diversity of chemical systems was discussed, including coordination compounds, silicate minerals, tungsten bronzes and intermetallic phases. A special highlight was the presentation by Sven Lidin, just prior to his election as President of the IUCr, who presented recent results on the structural dynamics of intermetallic systems at moderate temperatures. In an impressive and captivating talk, he showed that incommensurate structures often occur as intermediates between disordered high-temperature and ordered low-temperature phases in intermetallic systems. In a novel and highly thrilling series of synchrotron X-ray diffraction experiments he was able to follow the segregation of binary intermetallic phases in situ, providing new insight into the reaction mechanism as well as its dynamics. Thanks to experienced, enthusiastic but also disciplined speakers and well prepared presentations, all talks were followed by vivid discussions, appreciated by the speakers and audience alike. 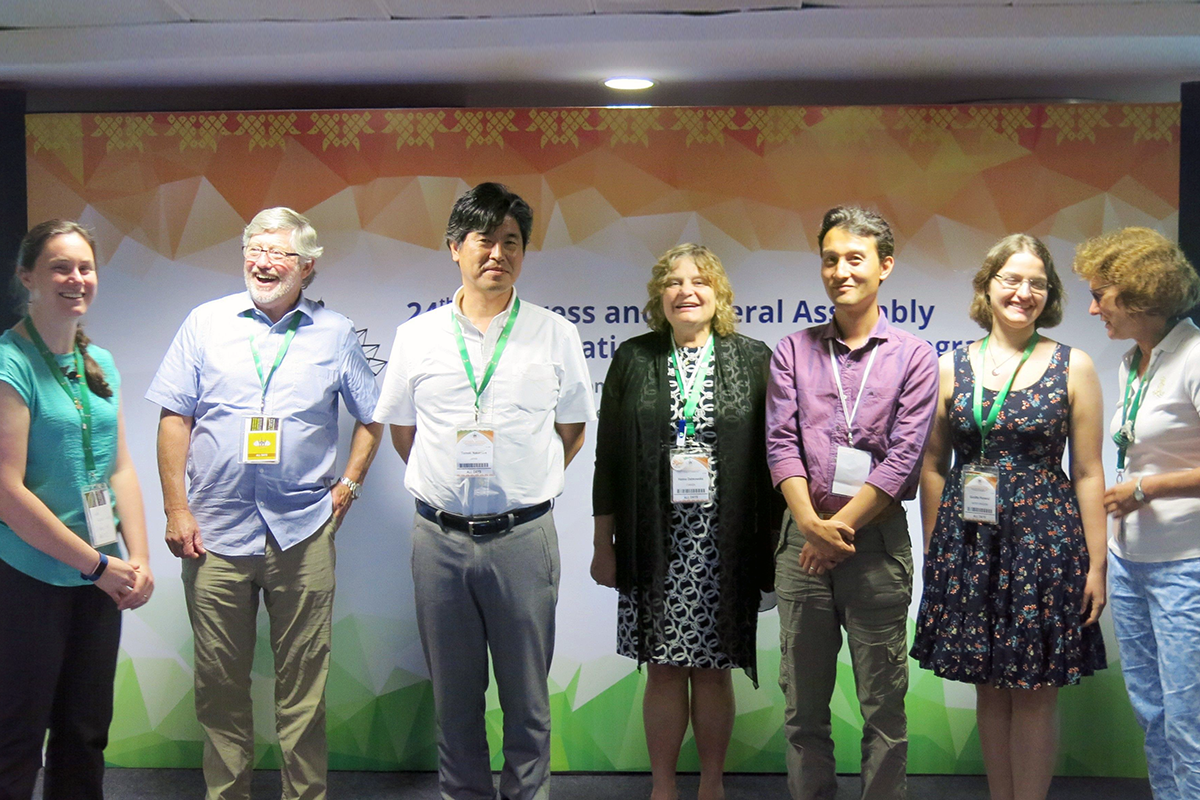 This was the first meeting devoted to crystallography in space, proposed as a follow-up to the very successful COSPAR-IUCr workshop organised in Puebla, Mexico, in 2016 (http://www.inaoep.mx/cospar2016/). There were five excellent presentations: mineralogical results from the Mars Science Laboratory Rover Curiosity by David Blake (USA); mineralogy and crystallography of samples returned from primitive asteroids by Tomoki Nakamura (Japan); prospects for organic minerals on Saturn's moon Titan by Helen Maynard-Casely (Australia); early stages of grain formation studied by microgravity experiments by Yuki Kimura (Japan); and ordering phenomena in minerals: vervey phase of natural magnetite by Giuditta Perversi (UK). Dominique Maez (Belgium) gave a short presentation about the influence of microgravity on the diffraction properties of protein crystals. The session was so well attended that there was no room to sit, and the subsequent question-and-answer period with animated informal discussion lasted about an hour after the end of the time provided. One of the discussion topics was whether a Crystallography in Space Science Commission (CSSC) would be a good addition to the IUCr. There was a lot of support for this idea and the proposal for such a commission will probably be presented at the Prague congress, after more discussion with the scientists involved.