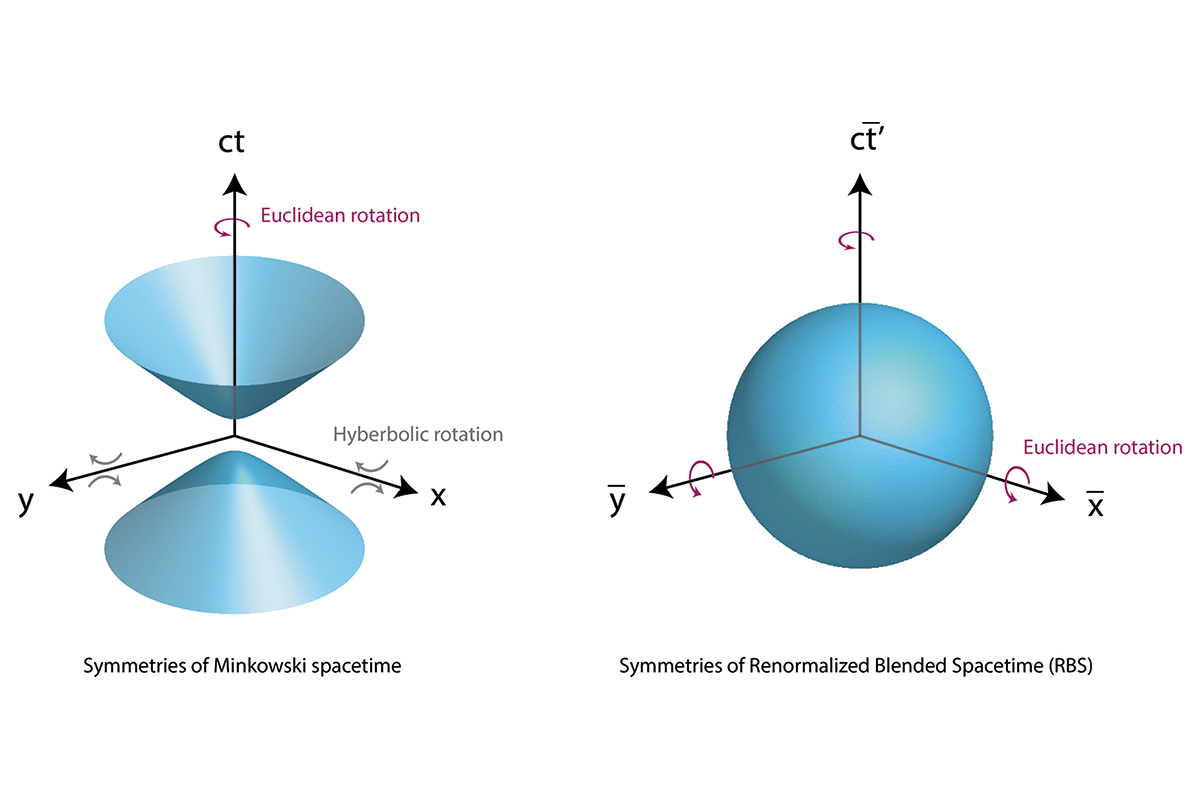 Conventional 3D Minkowski spacetime (two space axes, x, and y, and one time axis, ct, depicted in the left panel) is hyperbolic. Events in the past and future at a fixed spacetime distance from the origin form two sheets of the hyperbola as shown. A new reformulation of special relativity by Gopalan, called the renormalized blended spacetime (RBS), transforms the Minkowski hyperbolic sheets into a Euclidean sphere (right panel). This topological transformation allows one to express the symmetries of the Minkowski spacetime, namely a combination of Euclidean and hyperbolic rotations, all as pure Euclidean rotations. The relativistic physics content in both formulations is equivalent. (Figure courtesy of Hari Padmanabhan, The Pennsylvania State University, USA.)

A scientist studying crystal structures has developed a new mathematical formula that may solve a decades-old problem in understanding spacetime, the fabric of the universe proposed in Einstein’s theories of relativity.

“Relativity tells us space and time can mix to form a single entity called spacetime, which is four-dimensional: three space axes and one time axis,” said Venkatraman Gopalan, professor of materials science and engineering and physics at The Pennsylvania State University, USA. “However, something about the time axis sticks out like sore thumb.”

For calculations to work within relativity, scientists must insert a negative sign on time values that they do not have to place on space values. Physicists have learned to work with the negative values, but it means that spacetime cannot be dealt with using traditional Euclidean geometry and instead must be viewed with the more complex hyperbolic geometry.

Gopalan developed a two-step mathematical approach that allows the differences between space and time to be blurred, removing the negative sign problem and serving as a bridge between the two geometries.

“For more than 100 years, there has been an effort to put space and time on the same footing,” Gopalan said. “But that has really not happened because of this minus sign. This research removes that problem at least in special relativity. Space and time are truly on the same footing in this work.” The paper, published in the July 2021 issue of Acta Cryst. A, is accompanied by a commentary in which physicists Martin Bojowald (Penn State) and Avadh Saxena (Los Alamos National Laboratory, NM, USA) write that Gopalan’s approach may hold the key to unifying quantum mechanics and gravity, two foundational fields of physics that are yet to be fully unified.

“Gopalan’s idea of general relativistic spacetime crystals and how to obtain them is both powerful and broad,” said Bojowald. “This research, in part, presents a new approach to a problem in physics that has remained unresolved for decades.”

In addition to providing a new approach to relate spacetime to traditional geometry, the research has implications for developing new structures with exotic properties, known as spacetime crystals.

Crystals contain repeating arrangement of atoms, and in recent years scientists have explored the concept of time crystals, in which the state of a material changes and repeats in time as well, like a dance. However, time is disconnected from space in those formulations. The method developed by Gopalan would allow for a new class of spacetime crystals to be explored, where space and time can mix.

“These possibilities could usher in an entirely new class of metamaterials with exotic properties otherwise not available in nature, besides understanding the fundamental attributes of a number of dynamical systems,” said Saxena.

This article is based on a news story appearing in Penn State News.