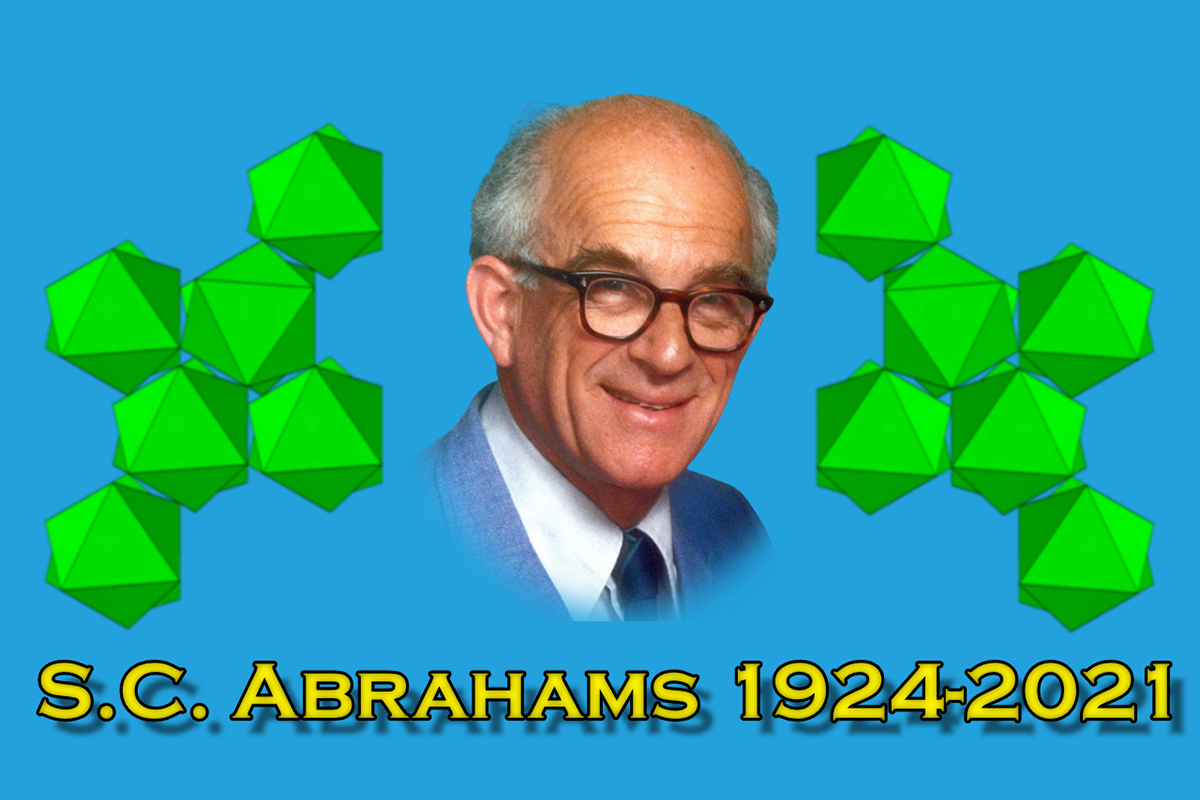 Sidney Cyril Abrahams, distinguished scientist, founding member of the American Crystallographic Association (the ACA), and a pillar of the IUCr, died 9 February 2021 at the age of 96 in Ashland, Oregon, where he had lived for 30 years, most of them in active retirement.

He was born in London, England, in 1924, the first of three children of Aaron and Freda Abrahams. In 1938 his father, a customs inspector, was transferred to the port city of Greenock, on the south bank of the Clyde west of Glasgow where the river expands into the Firth; the family moved to the nearby town of Gourock. Sidney completed his secondary-school education at the historic Greenock Academy in 1942, a year after the nearby, and very destructive, Clydebank Blitz.

He went on to study chemistry at the University of Glasgow. In the physical chemistry laboratory his Demonstrator (i.e. Teaching Assistant) was Jack Dunitz, who says Sidney’s brilliance was immediately apparent. During Sidney’s undergraduate years he completed the military training required at the time, and he became friendly with fellow chemistry student Rhoda Banks, to whom he was married for more than 70 years and with whom he had three children.

After finishing his BSc in 1946 Sidney started work on a PhD in the group of J. M. Robertson; other students in the group at the time were J. D. Dunitz, A. McL. Mathieson and J. G. White. Sidney determined the crystal structures of two classic molecules: p-nitroaniline and naphthalene, with the latter being the first of 45 NAPHTAnm structures archived in the Cambridge Structural Database. Data for these two structures were reported as having been measured at room temperature, but the actual temperature would have depended on the time of year the data were collected. Jack Dunitz once estimated that the average temperature in that laboratory during the first post-war winters was ca 10°C.

While with Robertson, Sidney was one of 62 graduate students from Europe invited to spend the summer of 1948 at MIT. The timing was fortuitous because it allowed him to attend the first meeting of the IUCr at nearby Harvard University, an opportunity that created a deep impression on him, as is apparent from his Memoir on the ACA History Portal. Sidney eventually participated in 15 of the first 18 Congresses, with his last, in 1999, taking place back in Glasgow.

After completing his dissertation in 1949 Sidney spent a postdoctoral year with W. N. Lipscomb at the University of Minnesota. There he set up a device to measure data at low temperatures and to grow crystals of substances that are liquids under normal conditions. Papers reporting the structures of H2O2 (at 253 K) and thiophene (at 218 K) were the result.

Sidney next spent four years at MIT and four more at the University of Glasgow, which awarded him a DSc in 1957. He then moved to the USA to take a position at Bell Labs in Murray Hill, New Jersey, where he stayed for 30 years. After his formal retirement in 1988 he was a Humboldt Senior Scientist at the University of Tübingen and a Visiting Professor at the University of Bordeaux before moving in 1991 to Ashland, Oregon, a small town in the Rogue River Valley where Southern Oregon University is located. There Sidney had an active retirement as an Adjunct Professor of Physics, publishing more than 65 papers during the period 1994–2010. 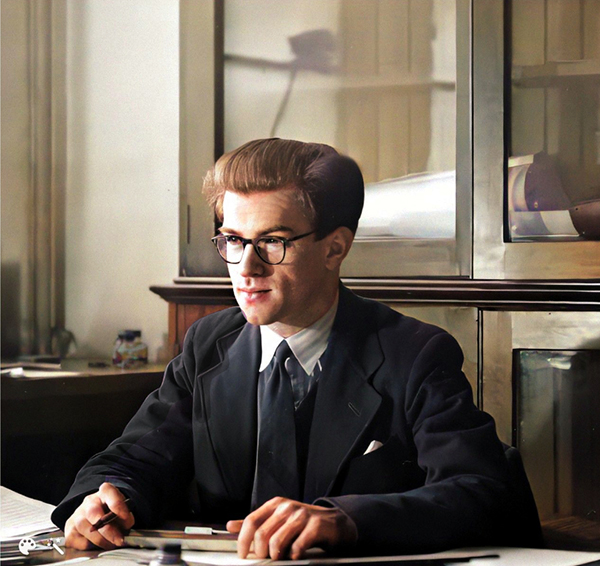 Over the course of his career Sidney worked principally in the study of the crystal structures and the physical properties of inorganic materials. He was particularly well known in the ferroelectricity community. He published more than 300 research papers, about half of them in IUCr journals and another 20% in the Journal of Chemical Physics. As of March 2021 his papers had been cited nearly 16 000 times. During the years 2016–2020 his papers were still cited an average of 300 times per year.

The most important crystalline materials that Sidney studied were lithium niobate and lithium tantalate; they are used in optical waveguides, mobile phones, piezoelectric sensors, optical modulators and various other linear and nonlinear optical devices. Single crystals of lithium niobate are especially important; the global market for them was approximately USD 135 million in 2020. Five of his papers on these materials reported structure determinations as a function of temperature using X-ray and neutron diffraction. One of his most cited publications (the 1966 paper in J. Phys. Chem. Solids with J. M. Reddy and J. L. Bernstein, Ferroelectric Lithium Niobate. Single Crystal X-ray Diffraction Study at 24 Degrees C), is a landmark paper in the understanding of that material. Also important is his 1986 paper Defect Structure Dependence on Composition in Lithium Niobate in Acta Cryst. B with P. Marsh.

Sidney was also famous for studies of tungsten bronzes, particularly strontium barium niobate. He was one of the pioneers in combining absolute structure determination using anomalous X-ray scattering and measurements of electrical polarization to link the structure and properties of crystals. Similarly, he connected absolute structure with optical rotation, as in his 1977 papers on the classic examples NaClO3 and NaBrO3. Both types of measurements were tricky, as the X-ray diffraction and the physical property measurements had to be carried out on the same crystal to preserve the axial relationships.

Another much-quoted work in the field of ferroelectricity was Sidney’s 1968 paper in Physical Review together with S. K. Kurtz and P. B. Jamieson on the relationship between atomic displacements and the Curie temperature and spontaneous polarization. He wrote an important review on atomic displacements in pyroelectric and piezoelectric crystals, published in the Materials Research Bulletin in 1978.

Sidney was also known for developing instrumentation, especially devices to allow extensive temperature variation. In the period 1950–1963 he published ten papers in the Review of Scientific Instruments and he then served on its Editorial Board from 1963 to 1965. Some of this work was done at Brookhaven National Laboratory, where Bell Labs maintained a presence. In 1959 Ted Prince and Sidney reported the development of the first automated single-crystal neutron diffractometer.

Sidney’s most well known paper (730 citations as of March 2021) may be his 1971 publication in Acta Cryst. A with E. T. Keve describing the use of normal probability plots to compare independent determinations of the same structure. Analyses of many pairs of supposedly equivalent determinations have shown that their differences often exceed those predicted from the uncertainties given by the least-squares refinement programs.

For his scientific achievements Sidney was awarded honorary degrees by the Universities of Uppsala (1981) and Bordeaux (1997). In 1982 Bell Labs named him a Distinguished Member of its technical staff. He was a Fellow of the American Association for the Advancement of Science, the American Physical Society, IUPAC and the ACA.

As Editor-in-Chief of the IUCr journals (1978–1987) Sidney oversaw major changes including moving all parts of page production to the Chester office and, in 1983, splitting Section B of Acta Cryst. into two sections (B and C). Sidney was an Editor from a traditional mold, unfailingly courteous and respectful of the rights and prerogatives of the author, but assured in his insistence on the primacy of the science in the reported research. Although conservative in many ways, he was also forward-looking. His encouragement of a terse 'telegraphese' style of writing in the structure reports of Acta C married the requirement of economy of paper with density and accuracy of information, and made it easier for the developers of the CIF standard in the early 1990s to translate the journal's requirements into a machine-readable format. Although Sidney’s term of office finished before the adoption of CIF, he was well aware of the importance of computational science, both as an aid to communication and as a tool of scientific analysis in its own right. He was also responsible for the production in 1977 of the first computer-assisted edition (the 5th overall) of the World Directory of Crystallographers.

Sixteen of Sidney’s papers were Commission reports, mostly on nomenclature but also on statistical descriptors and on the IUCr’s ca 1970 single-crystal intensity-measurement project. The report Atomic Displacement Parameter Nomenclature is notable for its length (12 pages; Sidney was always thorough) and its number of citations (245). After his retirement Sidney published 11 obituaries and appreciations. Over the course of his career he also put into print nine errata and one addendum, not because he often made mistakes (he was very precise and careful) but because he was a stickler for accuracy and willing to admit mistakes.

Sidney was a very distinctive presence at meetings – dapper and very much a gentleman of the old school. He was always pleasant, always polite and correct, and often amusing. Sidney was also known to have very firm ideas that he sometimes promoted resolutely, but he was often right and always gracious. He is remembered with affection by many, and is recognized both for his many scientific achievements and his many contributions to the crystallographic community. 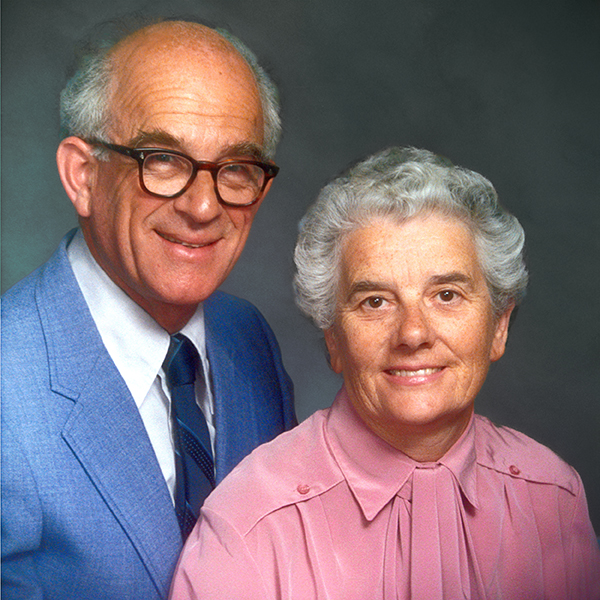