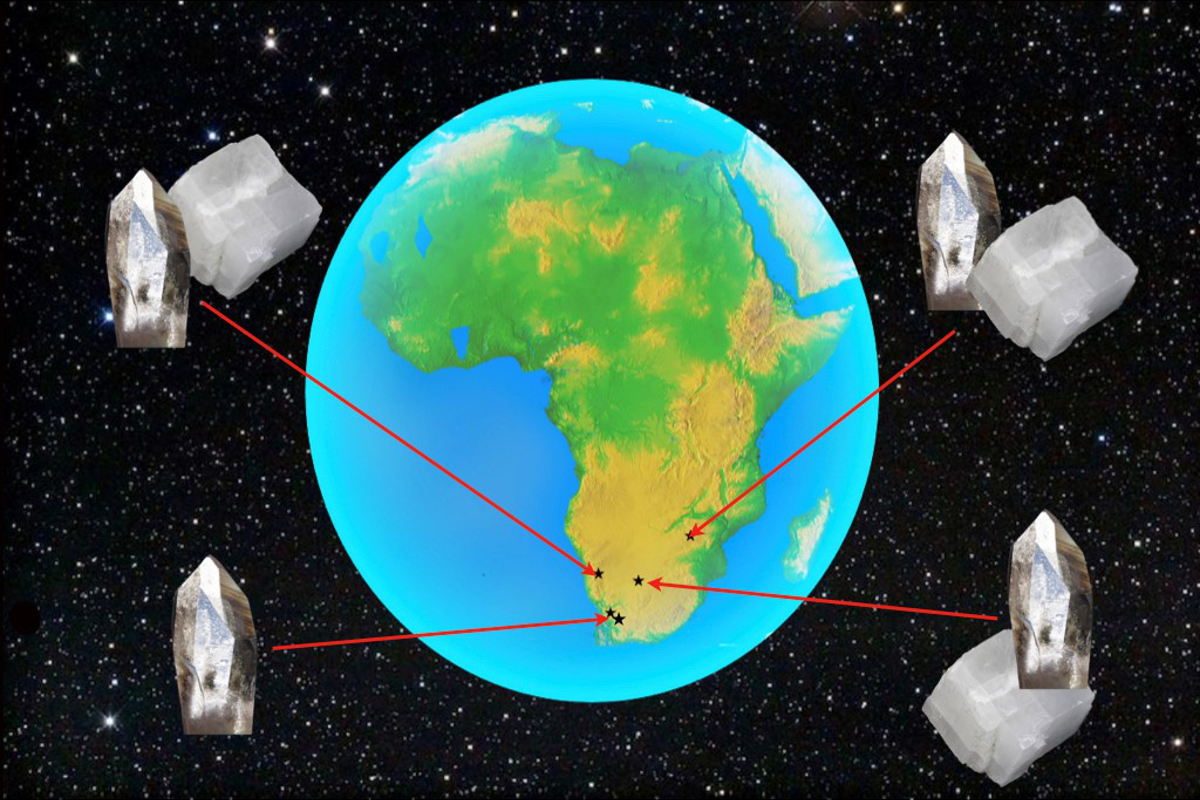 In a paper published in Nature in March 2021, Jayne Wilkins and co-workers reported the discovery of non-utilitarian calcite crystals collected by Homo sapiens during the late Pleistocene, 105,000 years ago (Wilkins et al., 2021). The crystals, along with burnt ostrich eggshells, were found in the excavations of a rock shelter located in Ga-Mohana Hill, at the edge of the Kalahari Desert (southern Africa) that at that time was a considerably wetter savanna environment. Unlike previous deposits, the shelter is sited 600 km inland, suggesting a non-coastal but pan-African origin of behavioral innovations among Homo sapiens. The discovery confirms once again the enigmatic attraction that crystals provoke in hominins. 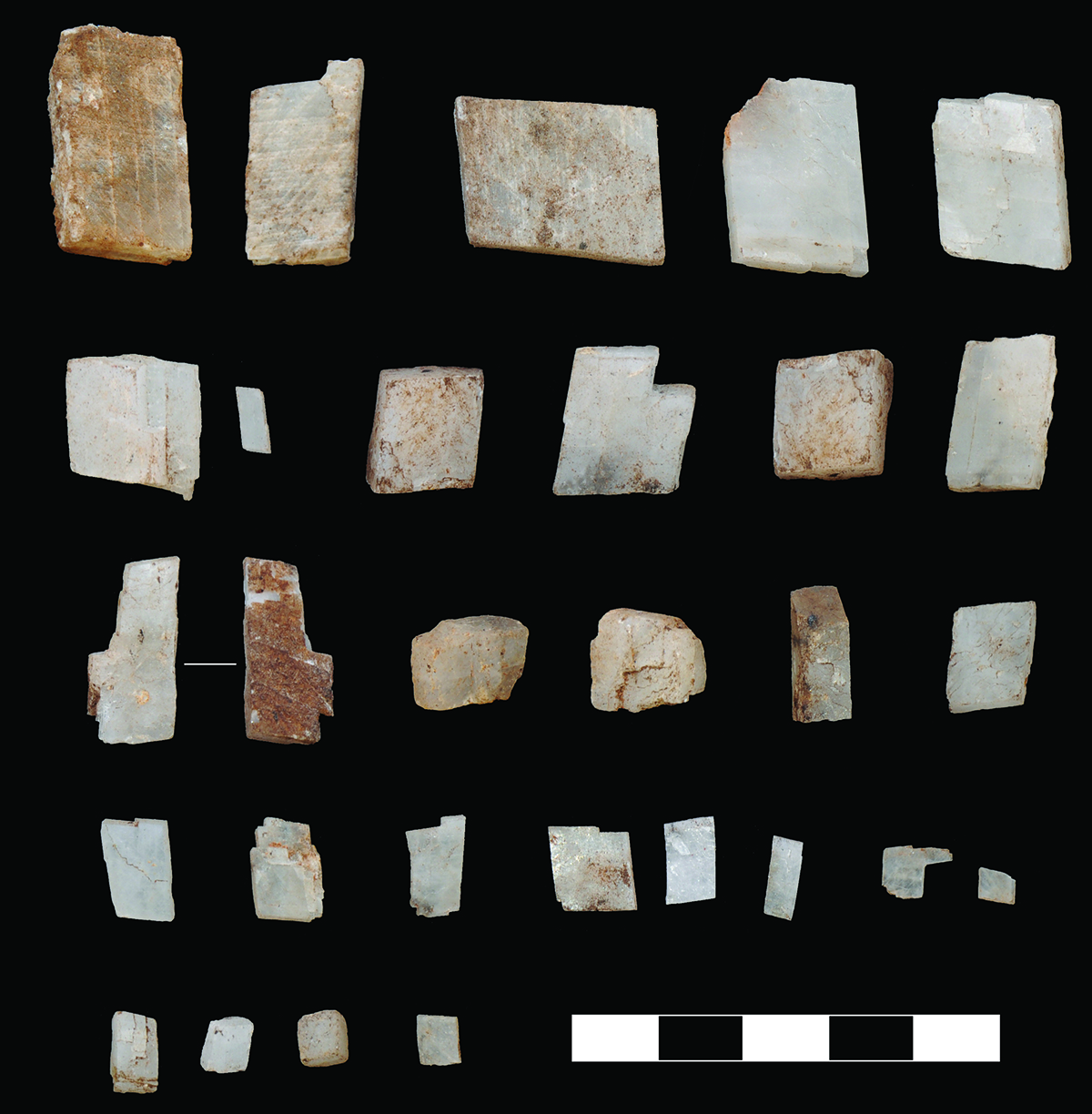 The cache of calcite crystals deliberately collected by Homo sapiens 105,000 years ago in the Kalahari desert, then a wetter savanna. Scale bar in cm. Courtesy of Dr Jayne Wilkins.

The collected crystals are semi-translucent white rhombohedrons with regular, well-formed facets up to 3.2 cm in length (see Figure). Calcite crystals with a rhombohedral cleavage shape do not occur naturally in the shelter walls or ceiling. Therefore, according to the anthropologists, they were intentionally collected, most probably from a dolomitic limestone exposure about 2.5 km from the shelter. Calcite crystals are too soft (of value 3 on the Mohs hardness scale), and they do not have a conchoidal fracture but a perfect rhombohedral cleavage. Therefore, they cannot be used for the production of tools. Because of their mechanical properties, their size and the lack of reworking, the authors claim that these crystals represent a small cache of deliberately collected non-utilitarian objects. In other words: more than 100,000 years ago, Homo sapiens, living far from the coast, had developed a mind capable of complex symbolic behavior.

There are two main reasons why crystals could be attractive to our ancestors: their optical properties and their unique morphology. The Kalahari's calcite crystals are not transparent, so we can discard the notion that the hominids were amazed by observing double birefringence. They are not bright but instead are matt whitish. Therefore, the attractiveness of these crystals must have been in their morphology, their polyhedral, Euclidean forms being so different from the fractal and curved shapes of all the natural objects of the savanna. Although the age at which the Kalahari crystals were collected may seem very old to us, the truth is that crystals were the first objects that hominids collected, including Homo erectus, far before the creation of consciousness. There is much evidence of this (Bednarik, 2003; Harrod, 2014). As discussed in an earlier edition of the IUCr Newsletter, twenty quartz crystals were found in the famous cave at Zhoukoudian alongside the remains of Homo erectus that date back 700,000 years (Pei, 1931). Complete quartz prismatic crystals were found in a stratum from the Lower Acheulian (between 300,000 and 150,000 years) at the archaeological site of Singi Talav in India (d'Errico et al., 1989). Interestingly, these Indian crystals belonged to different outcrops, which implies an extraordinary level of pattern recognition. The Wonderwerk Cave, also in the Kalahari Desert, may represent the earliest known collected quartz crystals in southern Africa, but need further evidence for their significance and antiquity (see Wilkins et al., 2021, supplementary information). Crystals of quartz younger than those of calcite collected at Ga-Mohana Hill have also been reported in other archaeological sites in Africa and Eurasia. Remarkably, there are no quartz crystals in the 105,000-year-old deposit, but many of them have been found in the overlying levels that date to 31,000 years old and 15,000 years old (Wilkins, personal communication).

None of those crystals were used as tools, nor worked on, nor do they even have perforations or signs of use as jewels. They were objects that the hominins considered valuable in themselves. In summary, 700,000 years ago (perhaps even earlier if other discoveries are confirmed), the brain of Homo erectus felt so attracted by the shapes of quartz crystals that they decided to treasure them (Bednarik, 2011).

The question is unavoidable: why did those hominins, who had not yet a developed consciousness, feel drawn to those quartz and calcite crystals? Most probably, the explanation comes down to their singularity (García-Ruiz, 2018). When Homo erectus tried to understand the world with their preconscious brains, the first thing to do was to find patterns, to separate what is similar from what is different. Everything they saw in the savanna was curved or ramified. They observed the trees, the bushes, the furrows carved by water, the streams, the clouds, the mountains, the animals and also their fellows. There were no straight lines, no object formed by flat surfaces, no polyhedral shapes. Everything that Nature has created on the Earth's face is the product of continuous branching and curvature, of the iteration that leads to self-similarity. Everything, except crystals. When Homo erectus discovered quartz, pyrite, calcite or fluorite crystals, they must have noticed that these polyhedral objects were utterly different from all other objects around them.

This unique geometry of crystals is likely why hominins so desired them. This is why they are considered key pieces when seeking for early symbolic behavior. The implications of this “crystal fascination” are various and important. Do our brains like order because we were attracted by crystals, or did our ancestors collect crystals because their brains were already prepared to search for order? Were crystals the catalysts for the neuronal processes that led to the ability to abstract and to use abstraction for understanding the world? Did crystals lead the first art-style towards abstraction and geometry? Did crystals play a role in creating a big beyond? Are they in the origin of religions and teleology? New discoveries of crystal collectors in African and Eurasian archeological and paleontological sites, such as the excellent one reported by Wilkins and her team, are needed to understand the relation of different species of hominins with idiomorphic crystals. But a deep meaning of that relation and its contribution to shaping our culture will only be achieved after future neurological investigations with children and apes.