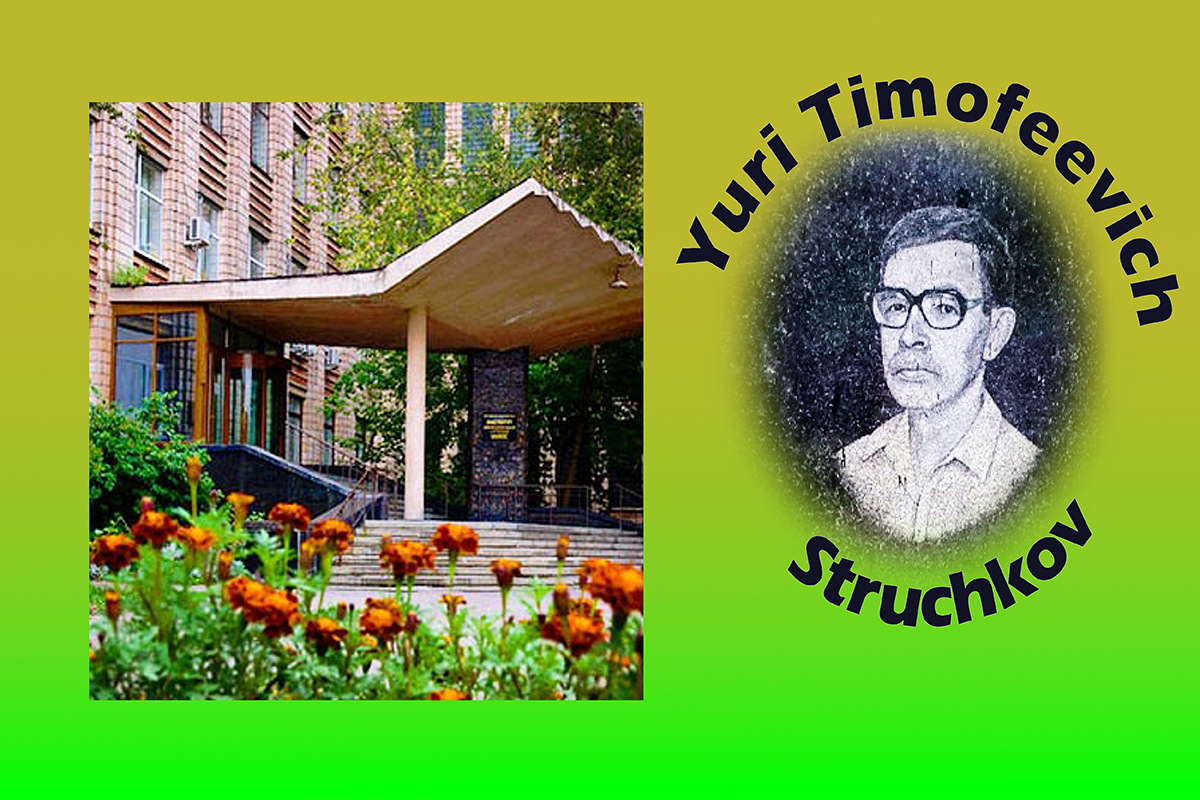 Yuri Timofeevich Struchkov was born on 28 July 1926 in Moscow, USSR. His parents, Timofey F. Struchkov and Olga P. Balakireva, graduated from Timiryazev Аgricultural Аcademy and worked in the Ministry of Agriculture; Yuri was their only child. During his teenage years, Yuri Struchkov encountered perhaps his most dramatic hardships that had a lasting effect on his life. In 1937, he had his right arm amputated after an injury in a street accident; in 1938, in the times of Stalin’s mass reprisals, his father was falsely accused and arrested; later, he perished in jail. From his very young years, Yuri was a very bright and curious child, especially interested in science, history and geography. Still, his path to education and eventual scientific achievements had never been easy and straightforward; it was full of hard struggles, as he grew up at tumultuous times and in a harsh environment.

In 1948, Yuri Struchkov graduated from the chemistry department of the Moscow State University. During his fourth year there, he joined the newly founded chair of crystallography, standing out in a group of nine chemistry and geology students with his excellent scores and hard work. He was a very determined sort of person and never considered an obstacle to be unsurmountable. Thus, in addition to a basic English course that he took at the University, he also learned German on his own in order to read Paul Niggli’s book Geometrische Kristallographie des Discontinuums. In 1948, Struchkov became a graduate student in the Institute of Organic Chemistry (IOC), with Aleksander Kitaigorodsky as his supervisor. He earned his PhD in 1953 for the crystal structure determination of two metal complexes of unsaturated organic compounds with single-crystal X-ray diffraction data recorded on photographic films and visually estimated reflection intensities. After this, Yuri Struchkov became a key researcher in Kitaigorodsky’s team in the Nesmeyanov’s Institute of Organoelemental Compounds (better known by its Russian abbreviation INEOS). In 1973, Struchkov’s X-ray diffraction group was spun out of Kitaigorodsky’s Laboratory into a separate entity directly reporting to the administration of the institute.

The growing demand for the results of structural studies on the part of synthetic chemists required the largest possible volume and highest possible quality of X-ray diffraction data. In 1969 and 1970, Yuri Struchkov visited the UK (nine universities in two months, with diffractometer practice in Oxford). He established working contacts with many British crystallographers and chemists, including Durward Cruickshank, Jeoffrey Wilkinson, Alan Mackay, Dorothy Hodgkin and Olga Kennard. In 1976, he was a guest at the Syntex Analytical Instruments headquarters in the USA. Two automatic diffractometers, which started non-stop operation in INEOS in 1974 (Hilger-Watts) and 1976 (Syntex P21 with a low-temperature attachment), along with an Eclipse S/200 computer (1977), transformed Struchkov’s group into one of the leading X-ray laboratories in the world. With a staff of about 10 crystallographers, this laboratory was determining up to 200 structures per year. In 1983, Struchkov’s Laboratory became the National Affiliated Centre of the Cambridge Crystallographic Data Centre and the distributor of the Cambridge Structural Database system in the USSR. In 1989, the Laboratory was transformed into the Centre for X-ray Structural Studies of the USSR Academy of Sciences. This transformation, however, did not affect the staffing: the Centre never had more than 15–20 permanent employees. The tremendous range and significant impact of its structural studies were primarily based on the rare efficiency of its scientists, and the high quality and credibility of their work.

Struchkov’s lab did not feature a multi-level management hierarchy, which was typical for Russian scientific laboratories of the time. By its structure, it was somewhat similar to a Western-type research team with no intermediate steps between rank-and-file group members and the team leader. Professor Struchkov participated actively and fruitfully in all the studies conducted by his staff and students. Each researcher in the lab was responsible for some field (or even for several fields) of modern chemistry in the USSR and abroad. The Laboratory, later the Centre, collaborated with 70 research institutions in all branches of small-molecule chemistry. Among ca 2000 papers published by Yuri Struchkov and co-workers during his 45 years in crystallography, there were about 200 review articles on very different topics of chemistry and physics. More than 60 PhD and 20 Dr Sci. theses were defended under Struchkov’s supervision. It is noteworthy that Yuri Struchkov only received his own Dr Sci. degree (for crystal structures of ca 100 transition metal π-complexes determined over the course of 20 years) in 1977, at the age of 51; he always subordinated his formal recognition to actual scientific research. Among various other activities, back in the early 1960s, Struchkov participated in the foundation of the Journal of Structural Chemistry (Zhurnal Strukturnoj Khimii), and later for long years served as one of its most diligent scientific editors.

The virtually unlimited scope of Struchkov's research interests included all the growing fields of small-molecule chemistry. In the 1970s and 1980s, all single-crystal X-ray studies in INEOS and most structural data for new organometallic and organoelemental compounds in other Russian institutions were produced in Struchkov’s Laboratory. Struchkov and his co-workers determined the structures of several hundreds of π-complexes (practically for all transition metals and many f-elements), performed comprehensive studies of carboranes and metallocarboranes, F- and P-organic compounds, polynuclear metal complexes, as well as metal clusters. Needless to say, the new structures, obtained and discussed in tight collaboration with synthetic chemists, considerably accelerated the development of all related fields of chemistry. Struchkov’s Laboratory and his Centre were a flagship unit in Russian X-ray structural studies, promoting world-level science at the national scale. In 1990, Yuri Struchkov became a corresponding member of the Russian Academy of Sciences; in 1993 he was elected Vice-President of the IUCr.

Along with many other fellow chemists and crystallographers, we recall years spent working in Struchkov’s Laboratory as a time full of great challenges and great inspiration. Whereas determining the structure of new, often unprecedented compounds was our main responsibility, Yuri encouraged us and all his colleagues to participate in the development of many fields of experimental X-ray crystallography. In the early 1970s, the Struchkov group began low-temperature structural studies of liquid and, later, gaseous compounds in normal conditions. The first data collection for the low-temperature structure of 1,1,4,4-tetramethyl-1,4-digermanacyclohexadiene, still made by photographic methods, required the hourly addition of liquid nitrogen to the system and continuous monitoring. So many laboratory staffers remembered this experiment especially well, as the X-ray camera plus a homemade cryostat was moved to Yuri Struchkov’s room, which was by no means anything like the secluded office of a high boss, but, on the contrary, one of the most often visited places on the premises. More than 100 crystal structures of liquid or gaseous compounds under ambient conditions had been determined by 1995. Systematic studies of predecessors of liquid crystals and physiologically active compounds were also conducted in Struchkov’s Laboratory. He was one of the first crystallographers in Russia who realized the significance of absolute configuration determination by X-ray diffraction based on anomalous X-ray scattering. Under his guidance, a program for refinement of an absolute configuration parameter (similar to the well-known Flack parameter) was developed, and in 1974, his team started determinations of absolute configurations quite regularly, including configurations of those molecules that do not contain any atoms heavier than oxygen. From the same time, Yuri Struchkov and Michail Antipin (who inherited and maintained the fruitful work of the X-ray Structural Centre after Struchkov's untimely death in 1995) accomplished a considerable number of high-precision diffraction studies of electron-density distributions in small molecules including several metal clusters. In the 1990s, the Centre for X-ray Structural Studies started investigations into fullerenes and perturbation crystallography.

Incomparable energy, deep knowledge of the subject and overwhelming love for science made Yuri T. Struchkov one of the most prominent persons in Russia and in the broader world of crystallography. His results contributed to important advances in various branches of chemistry. The alumni of Struchkov’s X-ray Centre went on to work in X-ray crystallography and often to lead the research groups at the forefront of structural science in numerous institutes and universities in Russia and all over the world. 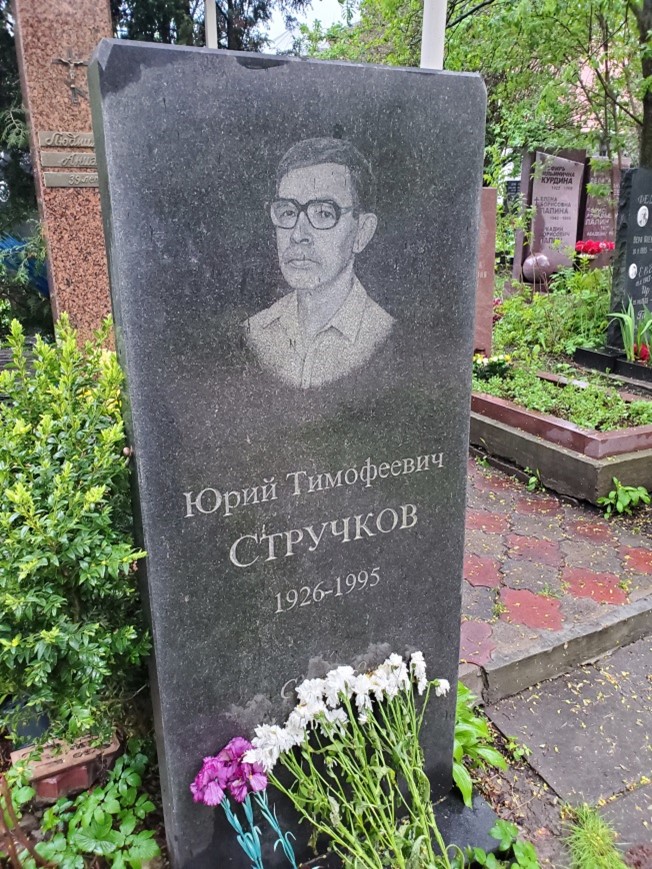 Yuri Timofeevich Struchkov died from complications developed after lung and heart surgery on 16 August 1995 in the hospital of the Medical University of South Carolina at Charleston, USA; he was 69 years old. He is buried in Donskoy cemetery in Moscow.