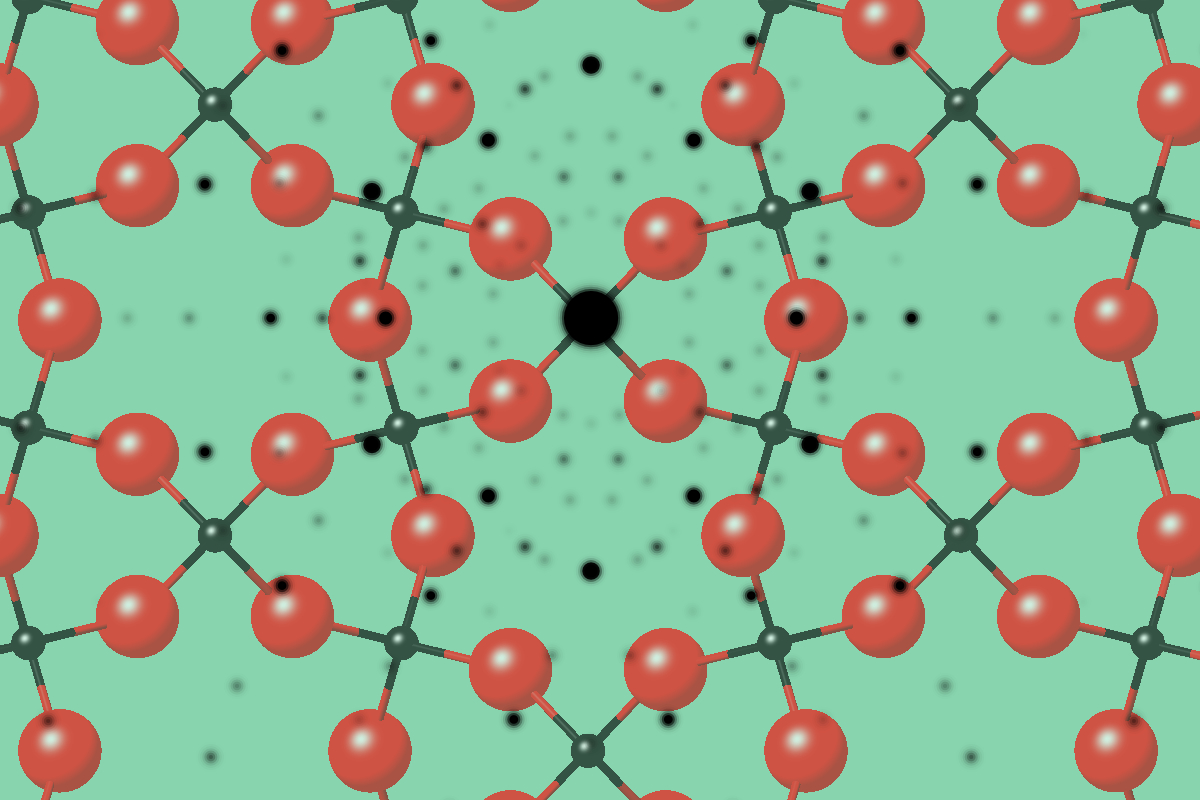 Definition
(The following applies to solids that, when illuminated by radiation having a wavelength on the order of Å, generate a three-dimensional diffraction pattern primarily characterized by discrete peaks. The entry for subperiodic crystal discusses crystals for which the diffraction pattern is instead primarily characterized by intensity maxima that are layers or rods.)

Historically, crystals were first defined in terms of their external morphologies, with the angular and symmetry relationships between their faces leading, in ca 1800, to the Law of Rational Indices. Over a century later the information from X-ray diffraction resulted in a definition based on the three-dimensional translational periodicity inferred from the periodicity of the array of Bragg peaks in the diffraction patterns of most crystals. More recently crystals have been discovered for which the array of Bragg peaks is not periodic in three dimensions so that the repeating atomic arrangement lacks translational periodicity in at least one direction. Currently there are two alternative (but theoretically equivalent) definitions of a crystal; both are based on the central idea of spatial order. One focusses on direct (or real) space, the other on reciprocal (or diffraction) space. The latter is more compact and elegant; the former can be easier to visualize.

Direct-space definition
A solid is a crystal if its atoms, ions and/or molecules form, on average, a long-range ordered arrangement.

In most crystals the arrangement is a periodic array that is governed by the rules of translational symmetry. In aperiodic crystals (incommensurate and quasicrystals) the arrangement is not periodic in three dimensions but is nevertheless still fully ordered, where the ordering follows particular mathematical rules.

Reciprocal-space definition
A material is a crystal if it has essentially a sharp diffraction pattern.

The conventional crystals are a special class, though very large, for which n = 3.

[The adjective "known" reflects the fact that it is possible to envisage mathematically-based models that lie outside these definitions. See e.g. Grimm (2015).]

See also
• Acta Cryst. (1992), A48, 928 where the definition of a crystal appears in the Terms of reference of the IUCr Commission on Aperiodic Crystals.

The IUCr Online Dictionary of Crystallography (ODC) was conceived by André Authier in 2005 as a project of the Commission on Crystallographic Nomenclature (CCN). Authier was the Editor of the ODC until 2009, when he was succeeded by Gervais Chapuis. For more information about the ODC see an article published in the IUCr Newsletter in 2019 here. That Newsletter article also includes some discussion of the definition of a crystal.

A definition of the term crystal created by the Commission on Aperiodic Crystals (CAC) was added to the ODC in 2009. At the core of that definition are statements that a crystal is “a material which exhibits essentially a sharp diffraction pattern” and “that most of the intensity of the diffraction is concentrated in relatively sharp Bragg peaks.” There is no mention of a crystal being an array of atoms or groups of atoms that are periodic in three dimensions. The 2009 definition is a revision of a definition first given in the CAC section of the IUCr’s 1991 Executive Committee report [see Acta Cryst. (1992). A48, 928].

Reasons for broadening the definition of a crystal

At the very end of the 2014 IUCr Congress and General Assembly in Montreal, I became Chair of the CCN because Mike Glazer, who had agreed to take over that role from Authier, had just been elected Vice President of the Union. The next day, three crystallographers approached me about revising the definition of a crystal in the ODC. They explained that the current definition, while correct and elegant, was a problem for teachers of crystallography. The focus on reciprocal space often makes the definition difficult for non-experts to understand; the translational periodicity that characterizes most crystals is easier for them to grasp.

During the year before the 2017 Hyderabad Congress, Mike Glazer (the member of the IUCr Executive Committee who had been assigned to the CCN) and I drafted an expanded definition. The proposed revision included the current definition verbatim but added some information about how the definition had changed with time and gave an alternative definition focused on direct space and mentioning translational periodicity.

Because the ODC (https://dictionary.iucr.org/Main_Page) is run as a Wiki we could have simply uploaded the expanded definition, but we circulated it instead to a small number of crystallographers we thought would be interested. We discovered immediately that there would be serious objections to any change in the existing definition.

In 2020 Mike and I recruited Marjorie Senechal, a mathematician who was one of the original members of the CAC and was involved with developing the original 1992 definition. She suggested a small number of changes to our original proposal. Once those changes were made, she supported it.

The proposed definition was circulated to the 56 members of the CCN on 9 February 2021. The initial response led to a revised proposal being sent out on 23 February. Eventually 20 CCN members participated in the email discussion. When the 17 March deadline arrived, the 39 members of the CCN who voted (72% of those eligible) had all endorsed the proposal. The expanded definition was posted to the ODC website on 23 March.

Although the proposal was adopted, it was generally agreed that the proposal is an interim solution and should be considered further. Marjorie Senechal points out that the 1992 definition too was always intended to be an interim definition because the characteristics of atomic arrangements (other than the classically periodic ones) that give rise to sharp Bragg peaks were not known. She adds that while a great deal of work has been done on that problem, the answers found so far require more mathematical background than should be expected of students consulting the ODC. 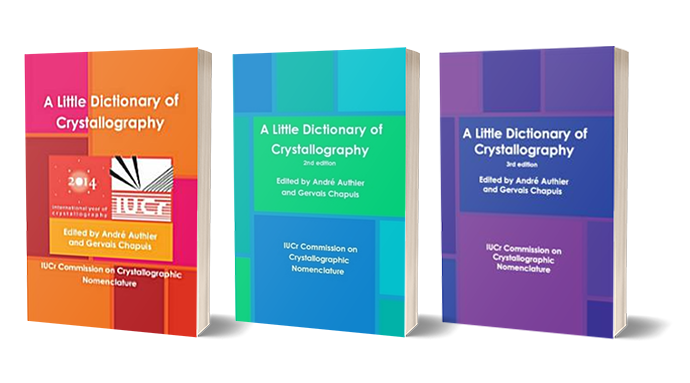 The new edition of the print version of the ODC (right) contains the latest definition of crystal. It can be obtained here.

Issues noted by CCN members during discussion of the proposal

The most basic problem noted during discussion of the proposal is that the purpose of the ODC is unclear. Is it the place where the crystallographic community puts its consensually-arrived-at precise definitions or a place where non-experts can find useful definitions? One member of the CCN wrote that

… the dictionary should be there to help and to facilitate, not (generally) to legislate and regulate.

but other CCN members have different views.

Another member pointed out that most definitions are compromises between generality and accuracy.

I also think that if the objective is to make people less confused, then we should simply define ‘crystal’ as something with periodic long-range order. … On the other hand, if the objective is to make a precise definition of ‘crystal’ as anything with long-range-order, we can do that, but we should be more like mathematicians and define it precisely and not concern ourselves with whether the definition is intelligible to people or not.

It is understood by all that the definition of a crystal is intimately related to the definition of order, and especially long-range order, but defining order is not a simple task (see the Newsletter article referenced above).

One CCN member asked what “relatively sharp Bragg peaks” means. What about subperiodic crystals (especially polytypes and crystals that are mixtures of polytypes) in which the Bragg scattering is concentrated in rods? Another CCN member replied that crystallographers working with polytypes were consulted when the CAC definition was formulated.

Definitions used in other fields and given in sources like Wikipedia may be at variance with the ODC definitions. To what extent should the IUCr be concerned? To what extent should IUCr journals require that authors use terminology accepted by the CCN? How is the answer to that question likely to affect the recruiting of new authors to IUCr journals?

There are many related terms for which definitions are needed in the ODC. Besides order (long-, medium- and short-range order) the list includes ideally imperfect crystal, liquid crystal, metacrystal and perhaps paracrystal. Also needed are definitions for mosaic block and for disorder of the first and second kinds. Definitions for subperiodic crystal and stacking fault were added to the ODC during the discussion of the proposal.

A structural biologist asked how things that look like crystals (transparent, plane faces) but do not diffract should be described (other than as “disappointing”).

While there are unresolved questions about the definition of a crystal, many members of the CCN wrote that a real-space definition mentioning periodicity is needed. Many also wrote that, while the proposed definition is imperfect, it seems to be the best that can be formulated now. In coming years there may be advances in how we think about structures that are ordered or disordered in one or more dimensions. The definition currently in the ODC will almost certainly be revised at some future time.