J. Maddox began a 1988 editorial in Nature (v. 335, p. 20l) with the statement "One of the continuing scandals in the physical sciences is that it remains in general impossible to predict the structure of even the simplest crystalline solids from  knowledge of their chemical composition." This 'scandal' was the subject of a workshop sponsored by the American Crystallographic Association and the IUCr in July 1995 at McGill University. Thirty-two people from 11 countries discussed Inorganic Structure: Description, Understanding and Prediction. Thirteen received IUCr Young Scientist Awards. With the excellent assistance of A.-M. Lebuis, McGill U. provided accommodations that helped ideas to flow, and the discussions continued well into the evening in the old city.

Some people see inorganic compounds in terms of their place in the hierarchy of a symmetry tree, others prefer physical models based on classical or quantum mechanics. Some think in terms of the packing of spheres or the stacking of space filling polyhedra, while others use simple bond models and electron counting rules. How can such diverse approaches be presented in a single course?

A discussion of the strengths and weaknesses of each of the different models was the approach taken in Montreal. The workshop started with the leaders, D. Brown, D. Price, J. Downs, H. Burzlaff, J. Burdett, E. Parthe and C. Johnson, introducing a variety of models. They described approaches based on chemical bonds, two-body potentials, electron density, space symmetries, quantum mechanics and electron counting rules. Two further thought-provoking presentations introduced space-filling polyhedra (B. Boo) and possible applications of Riemann space to mineral structures (R. Galiulin). The participants concluded that much work needs to be done before the potential of the inorganic databases can be fully realised in a field where non-stoichiometry, disorder and superstructures are common and frequently go unreported. 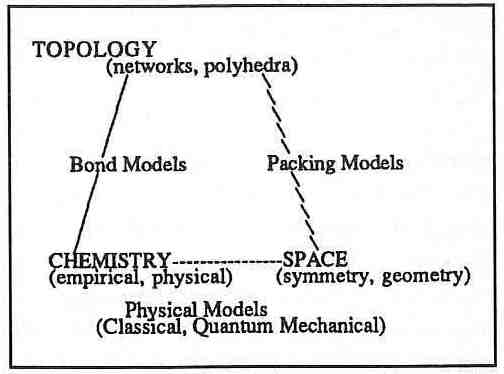 The Bermuda Triangle of Inorganic Chemistry.

The participants recognized that all the models could be presented in either geometric or analytical terms, the former providing clearer insights, the latter more precise results. The value in combining the geometric and analytic approaches was illustrated by Jeremy Burdett who showed how to extract simple but relevant ideas from large stacks of computer output. One can often make good predictions of the local environment around an atom using chemical bonding models. The difficult step lies in determining the long range structure. A vast number of infinite lattices can be generated from a single local arrangement of atoms and there are few criteria for selecting the correct one. The problem is similar to the problem of protein folding. The local arrangement of atoms is known at all points in the protein but predicting the three-dimensional arrangement of the atoms has so far proved impossible. 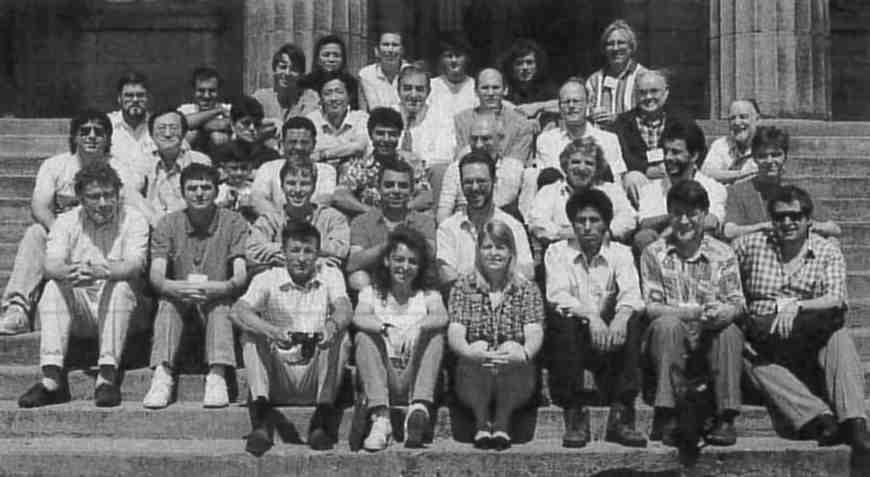 Group photo from the McGill U. Workshop on Inorganic Structure.

Some models use topology in the form of bond networks or space filling polyhedra. Some describe the chemistry based on empirical rules or quantum or classical theory, and some incorporate 3-dimensional space either in the form of symmetry relations or geometry. All models discussed involved at least two of these characteristics. As shown in the diagram, the models can be placed along the sides of a triangle which has topology, chemistry and space at its corners. The model we seek is in the center since it must involve all three characteristics. Chemistry tells us about the local structure and topology defines the relations between atoms, but ultimately both must conform to the restrictions imposed by space group symmetry and the geometry of our 3-dimensional world. Only one of the models we discussed involved all three aspects, the topological description of electron density. Electron density is calculated or measured in Euclidean space and must therefore conform to space group symmetry. It is based on quantum mechanics which is the underlying physical model of chemistry, and it is interpreted in terms of its topology. However, it has been applied to crystals in simple cases only and is a long way from predicting long range structure.

We came away from the workshop with a clearer idea of the questions that need to be addressed, a better understanding of the relationship of the various models to one another, and budding collaborations designed to remove the taint of scandal with which our discipline has been smeared.