The fifth Summer School on the Rietveld Merhod (RSS95-RS), co-organized by the IUCr's Commission on Powder Diffraction, was held in July 1995 at Moscow State University. The 86 students from Germany, France, The Netherlands, UK, Bulgaria, Latvia, Ukraine, Byelorussia, Russia and USA heard lectures in the mornings and gained hands-on experience with PC computers in the afternoons. The computer exercises were based on the two most widely distributed Rietveld refinement programs, DBWS and GSAS (which has just become available in a PC version). The students were asked to concentrate on one program, but many found they had enough prior experience with single crystal crystallography or the Rietveld method using other programs to benefit from trying out both. 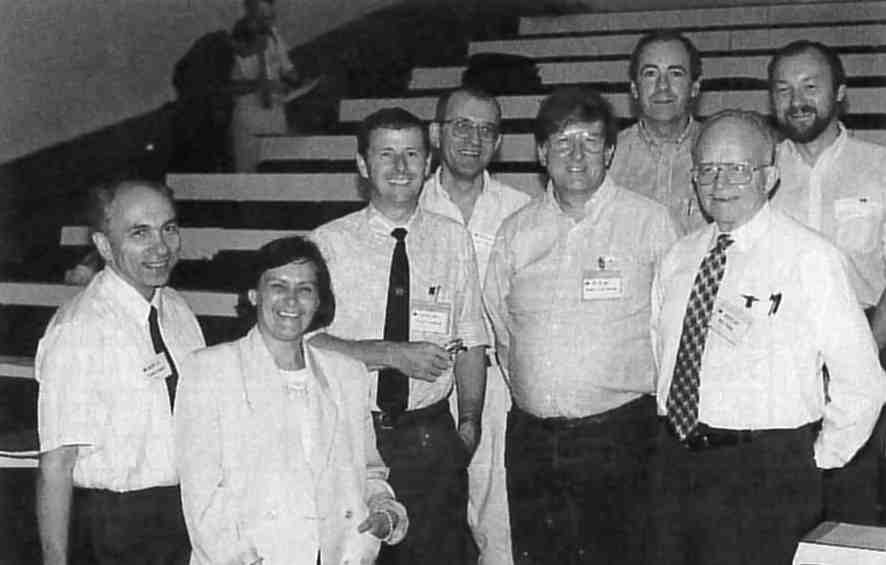 The Organizing Committee, under the able and active chairmanship of L. A. Aslanov (Chemistry Dept, Moscow State U.) did a phenomenal job of arranging the needed space, computers, housing, meals and supporting services. RSS95-RS was organized by the IUCr Commissions on Powder Diffraction and on Crystallographic Teaching, the Euroasian Universities Association, Moscow State U., the Frank Lab of Neutron Physics (Dubna), and the St Petersburg Inst. of Nuclear Physics, Garchina.

Sponsorship came from the IUCr, the Russian Fund for Fundamental Investigations, The Netherlands Organization for Scientific Research, Nonius B. V., the Frank Lab of Neutron Physics, and the Moscow State U.

As is now an RSS custom, in the closing ceremony Tony Cheetham spoke briefly on behalf of the three main lecturers, expressing their thanks and appreciation of a job well done by the organizers and of the diligence of the students ... in the language of the host country. This always amazes and amuses the audience because Tony's pronunciation and intonation are excellent; the jokes also come across well, even though he had never spoken the language before. He attributes his success with these talks to his dedication to the RSS program. We also note that the attractive young women who help him prepare these talks are both native speakers of the language and participants in the RSS.