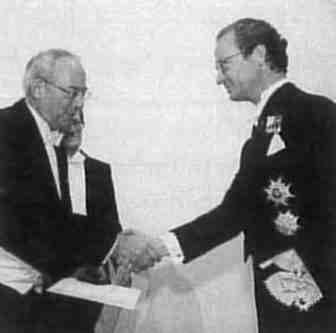 The Aminoff Prizes for 1995 and 1996 go to Hugo M. Rietveld and Philip Coppens, respectively.

The Royal Swedish Academy of Sciences awarded the Aminoff Prize for 1995 to Hugo M. Rietveld for his outstanding contribution to the analysis of powder diffraction data. Dr Rietveld received the prize at the Anniversary Meeting of the Academy in Stockholm on March 31, 1995. The prize included a gold medal designed by Gregori Aminoff and a cash award. The prize ceremony was followed by a dinner at the Karlsberg Castle in the presence of Their Majesties the King and the Queen.

An Aminoff Symposium was organized by the Academy on March 30, 1995, in honor of Dr Rietveld. All Nordic countries were represented among the 65 participants who listened to invited speakers from Sweden and abroad lecturing on the past, the present, and the future of the Rietveld Refinement Method. Hugo Rietveld himself gave a retrospective view, and A. Hewat (ILL) described the early history. J. Thomas (Uppsala U.) talked about the first application to X-rays and B. David (RAL) described time-of-flight Rietveld refinement. The final talk, on future development of the Rietveld method, was given by J. Rodrigues-Carvajal (Lab. Léon Brillouin, Saclay).

The Academy announced that Philip Coppens will be awarded the Aminoff Prize at the 1996 ceremony in recognition of his contribution to the experimental measurement and theoretical understanding of electron density distributions in crystals.

The prize, named for Gregori Aminoff, who introduced X-ray crystallography into Sweden in 1918, rewards individual contributions in crystallography, including areas concerned with the dynamics of formation and dissolurion of crystal structures.