A workshop on Weak Directional Interactions, organized by J. Kroon and L. Kroon-Batenburg at the Bijvoet Center of Biomolecular Research (Utrecht U.) in September 1995, featured a multidisciplinary discussion of the nature of weak interactions, important in the structure of crystals and macromolecules. C-H···O interactions were the principal focus of the discussion but C-H···B (B=N, acetylene, pi, aromatic rings, etc.) interactions also received attention.

J. Kroon (Utrecht) opened the workshop with the provocative question: "Is crystal packing determined by C-H···O hydrogen bonds, or are C-H···O contacts determined by crystal packing?" F. Van Duijneveldt (Utrecht) presented an exposition of the ab initio molecular orbital treatment of C-H···O bonds. He discussed the partitioning of the energy involved into its components.

G. Jeffrey (Pittsburgh) pointed out that with forced contact C-H···O interactions, the exchange repulsion term may be greater than the electrostatic attractive term at short H···O distances. Short C-H···O distances may not make bonding contributions to the cohesive energy, especially if the C-H···O angle is far from 180°. The concept that short H···O distances may correspond to repulsive forces while the longer distances are attractive is a novel one. The calculated H3CH···OH2 potential is very flat. A flat potential surface over a range of distances implies both a sensitivity to structural features beyond the C-H···O bond and a very minor influence on molecular conformation or molecular packing.

"... Structure is intimately related to properties ... This is especially true of weaker interactions that influence supramolecular chemistry, self-assembly, and molecular recognition ... "

A survey lecture on C-H···B hydrogen bonds in crystals was given by Th. Steiner (Berlin). He included an historical account, going back to Glasstone in 1937 and Donohue's 1968 dismissal of the existence of the C-H···O hydrogen bond. He discussed chemical variety, geometry, patterns, database studies and examples of noteworthy structures and structural patterns and included the general features of C-H···N hydrogen bonds.

Hooft, on the other hand, using only contacts involving closest neighbors, tries to establish if, or when C-H···O bonds are observed. He compared O···O and C···O distances in the absence and presence of hydrogens covalently bonded to the carbon or oxygen atoms. With O-H···O interactions, he generally observed an O···O shortening, but for C-H···O this trend was not manifest.

E. Lutz and J. van der Maas (Utrecht) reviewed the vibrational spectroscopic criteria for hydrogen bonding applicable in crystals, liquids, solutions and gas phase systems. They pointed out that for A-H··· B, the formation of a hydrogen bond leads to a lowering of the frequency, and an increase of both intensity and bandwidth for an A-H stretching vibration, while the A-H bending vibration shows an increase in frequency upon the formation of a hydrogen bond. Concurrently, the stretching vibration of the acceptor shows a lowering of the frequency.

J. Bernstein (Beer Sheva) suggested that the presence of particular patterns in crystal structures can be a useful criterion for identifying hydrogen bonds and other interactions. Such an approach utilizes structural data and chemical intuition. The use of graph sets to characterize the patterns of hydrogen bond networks were presented. Graph set classification shows features which persist among a large number of different hydrogen-bonded crystal structures. 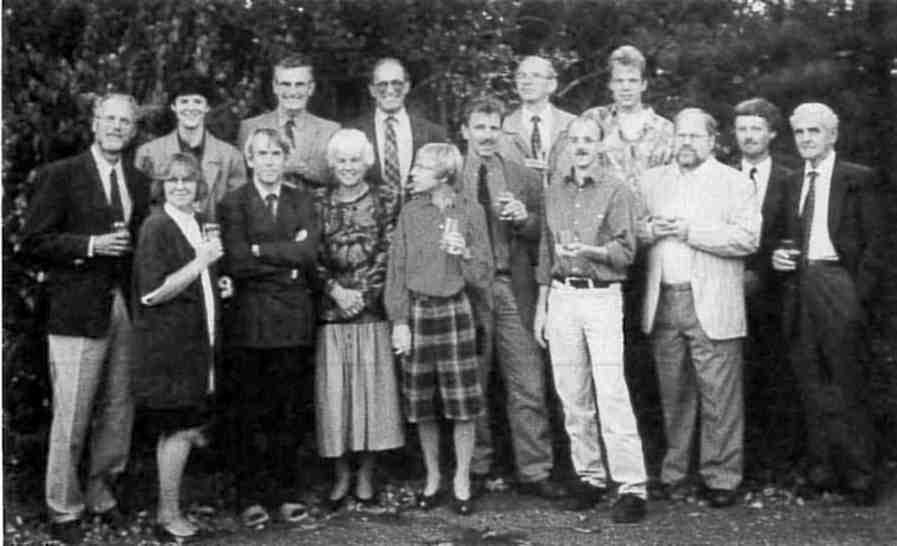 Tired of drinking indoors, the participants at the H-Bond conference take to the woods.
F. Van Duijneveldt discussed hydrogen bond cooperativity and using ab initio calculations on the cyclic (H2O)3 trimer. He emphasized the importance of correcting for basis set superposition error.

Investigators differed with respect to the criteria that define a hydrogen bond. L. Kroon-Batenburg (Utrecht) compiled the following list of these criteria.

It was evident from the lively discussion that forums such as this can be useful for defining and debating basic concepts. Because structure is intimately related to properties, crystallographers have a crucial role to play in such discussions. This is especially true of weaker interactions that influence supramolecular chemistry, self-assembly, and molecular recognition, areas of increasing interest to chemists and molecular biologists.