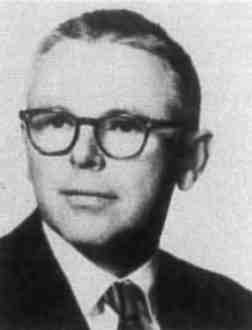 David P. Shoemaker, 75, Emeritus Professor of Chemistry at Oregon State University, died during dialysis treatment August 27, 1995. He earned his BS degree from Reed College in 1942 and his PhD at the California Institute of Technology in 1947, where he specialized in X-ray crystallography and studied with the late Linus Pauling. He was married in 1955 to Clara Brink, a fellow chemist with whom he collaborated on many X-ray research projects, with emphasis on structures of unusual metal alloys.

He was Professor of Chemistry at MIT from 1951 until 1970, when he moved to Oregon State U. as chairman, a position he held for 11 years. He retired in 1984, but continued an active interest in research and teaching. This included participation in revision of the text "Experiments in Physical Chemistry" by Shoemaker, Garland, and Nibler, which is the most widely used text of its type in the US and which will enter its 6th edition in 1996.

He was author of numerous scientific articles. He was president of the American Crystallographic Association in 1970 and a member of the executive committee of the IUCr from 1972 to 1975. In 1986, he received the Howard Vollum award in Science and Technology from Reed College.