Venue: Molecular Biophysics Unit (MBU) at the Indian Institute of Science
The Indian Institute of Science (IISc) was founded in 1909 as a result of the joint efforts of Jamsetji Nusserwanji Tata, the Government of India, and the Maharaja of Mysore. In 1886, Jamsetji Tata conceived of a university of science that will work for the benefit of India, and in 1898 created an endowment for establishing such an institution. The Government of India then took up the effort, and, in consultation with scientists in England and in India, decided to locate the Institute in Bangalore, where the Maharaja of Mysore, Shri Krishnaraja Wodeyar IV, donated 372 acres of land. The Institute was formally vested in 1909, the foundation stone was laid in 1911, and the first batch of students started their studies in the same year. The Molecular Biophysics Unit (MBU) at the campus was founded in 1971 by Prof. G. N. Ramachandran.
Over the 105 years since its establishment, IISc has become the premier institute for advanced scientific and technological research and education in India. Beginning with 2 departments and 21 students in 1911, today IISc has 39 departments, units, or centres, 3500 students, and about 500 academic and scientific staff, supported by 600 administrative personnel. Out of this population of students, about 2200 are in various PhD programs, almost 900 are enrolled for various Masters degrees, whereas about 400 are registered in the newly established, research oriented, four-year Bachelor of Science (Research) programme, of which the first batch will graduate in 2015. 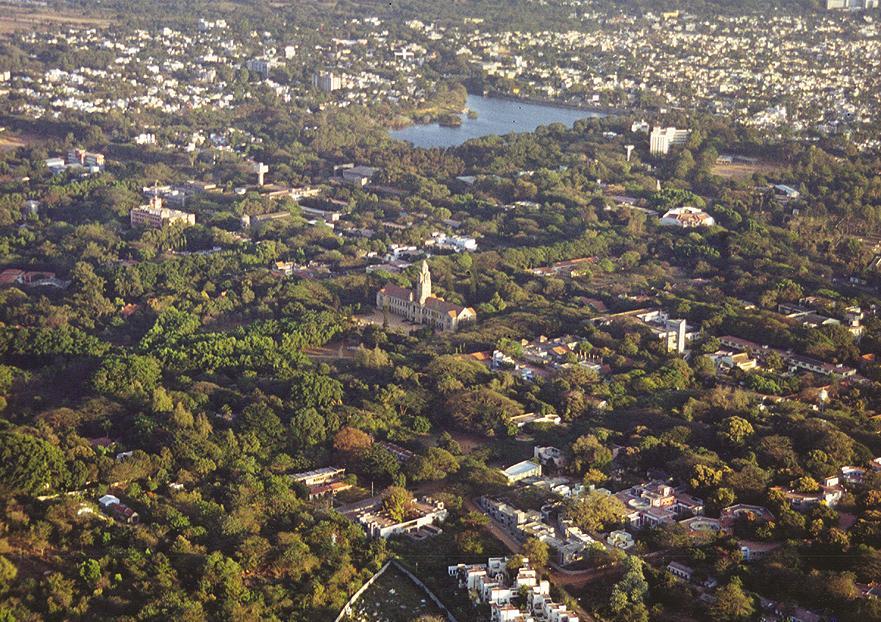 Campus
The IISc campus is located in North about 4 kilometers from the Bangalore City Railway Station and bus stand on the way to Yeshwantpur. The Institute is about 35 kilometres from new Kempegowda International Airport (formerly called Bengaluru International Airport). A number of other research institutes viz. Raman Research Institute, Indian Space Research Organization (ISRO), Wood Research Institute and Central Power Research Institute (CPRI) are close to IISc. Most of these institutes are connected to IISc by a regular shuttle service.
The campus houses more than 40 departments marked by routes such as the Gulmohar Marg, the Mahogany Marg, the Badami Marg, the Tala Marg, the Ashoka Marg, the Nilgiri Marg, the Silver Oak Marg, the Amra Marg and the Arjuna Marg. The Institute is fully residential and spreads over 400 acres of land situated in the heart of Bangalore city. The campus features six canteens (cafeterias), a gymkhana (gymnasium and sports complex), a football and a cricket ground, four dining messes (halls), one multicuisine family restaurant, thirteen hostels, an air strip, a library, two shopping centers and residence areas for faculties and other staff members, besides other amenities. The IISc campus harbours both exotic and indigenous plant species with about 110 species of woody plants. The roads on the campus are named after the dominant avenue tree species.

City
Bangalore (Bengaluru) is the capital of the Indian state of Karnataka and one of the most important tourist centers of the state. It has a population of about 8.42 million and a metropolitan population of about 8.49 million, making it the third most populous city and fifth most populous urban agglomeration in India. Located in southern India on the Deccan Plateau, at a height of over 900 m (3,000 ft) above sea level, Bengaluru is known for its pleasant climate throughout the year. Its elevation is the highest among the major large cities of India. Bengaluru is known as the "Silicon Valley of India" because of its role as the nation's leading information technology (IT) exporter. Indian technological organizations ISRO, Infosys and Wipro are headquartered in the city. A demographically diverse city, Bengaluru is the second-fastest growing major metropolis in India.