The Two Crystallographers from Yorkshire sketch

by Anthony Nicholls and Phil Bourne (neither of whom are from Yorkshire, but one of whom spent two years in the People's Republic of South Yorkshire) and with apologies to Monty Python and George Sheldrick (who is from Yorkshire). 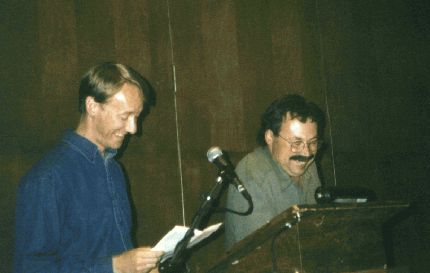 [Bourne] These young crystallographers today don't know how lucky they are!

[Nicholls] Aye. That's for sure. Don't know they're born they don't.

[Bourne] Aye. Synchrotrons and fancy 'otels - what a loada rubbish.

[Nicholls] Aye. We were lucky if we 'ad a four circle diffractometer, and we use-to sleep on floor in lab.

[Nicholls] Course I meant to say we 'ad two, two-circle diffractometers and triclinic - you was lucky - every crystal we 'ad was twinned.

[Bourne] You was lucky - at least you 'ad lab. We just 'ad shed down bottom o garden twith a generator that run on paraffin.

[Nicholls] Aye. But in the old days that were luxury! I can remember Charles Supper 'imself 'olding me crystal in the beam and me with me chest as backstop.

[Bourne] Tis nothin. We were so poor we 'ad to go to hospital and beg the doctors to let us put crystals in beam while they X-rayed patients.

[Nicholls] X-rays, you 'ad X-rays We 'ad to make do with strong flashlight and crystals like specs of dust.

[Bourne] Luxury. Our crystals were so small we just 'ad to guess they were there and 'ope for the best.

[Bourne] Aye. Well our crystals were so small they weren't so much organized matter as autonomous collectives. It'd take our FORTRAN programs weeks just to figure out their space group

[Nicholls] You mean ones and zeros?

[Nicholls] Luxury. We 'ad IBM with only ones, zeros twas optional extra.

[Bourne] That's nothin. We 'ad IBM twas so old that every four hours you 'adta go wind it up. Mind you we was strong in them days.

[Nicholls] Before we 'ad IBMs twas tough. I remember when we 'ad to use cash register at local chip shop between fry-ups. Mind you food was some-at in those days. None of this healthy rubbish they have today..

[Bourne] Aye, but you was lucky. We 'ad to use giant abacus for our Fourier transforms. 3 mile long it t'were if it t'was a yard. We ad-ta run from one end t'other all day long. Mind you we was fit in them days.

[Nicholls] Aye, but that were luxury.

[Nicholls] Aye. We ad ta-use this [reaches behind podium and brings out a box of Beevers-Lipson strips].

[Nicholls and Bourne] Aye. The young crystallographers today don't know how lucky they are.