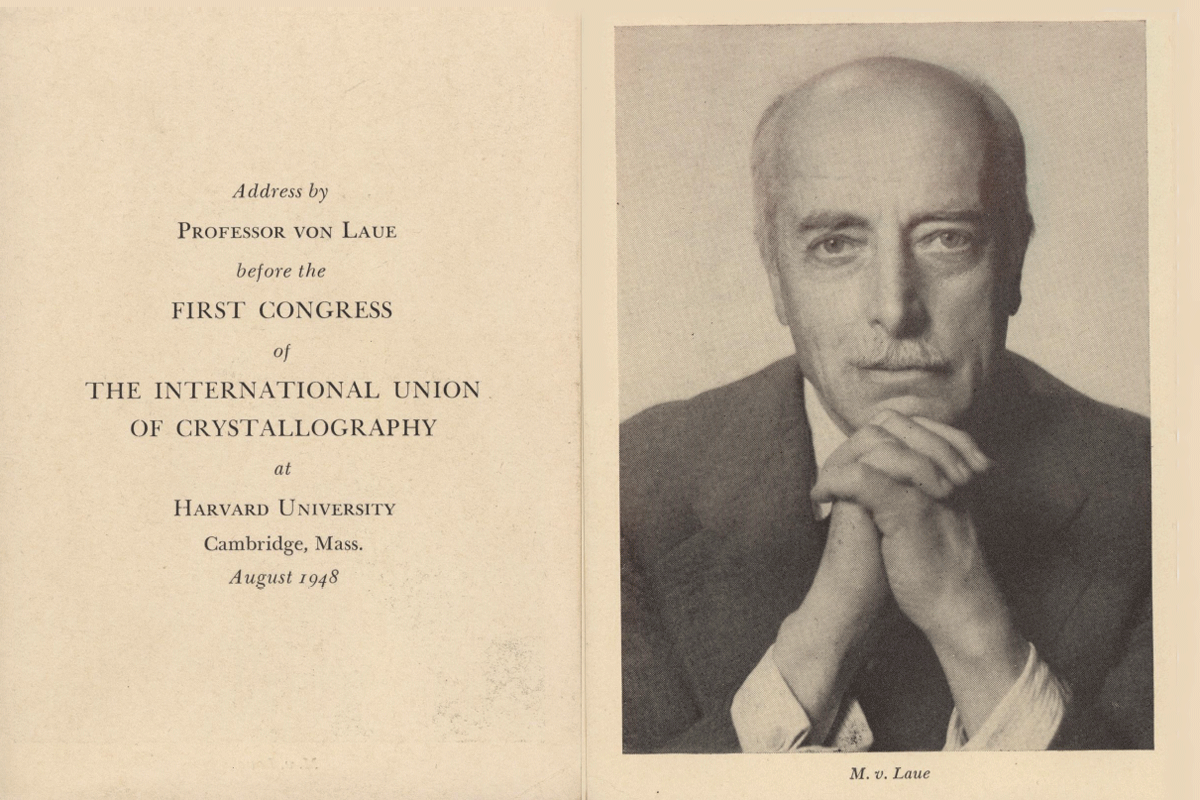 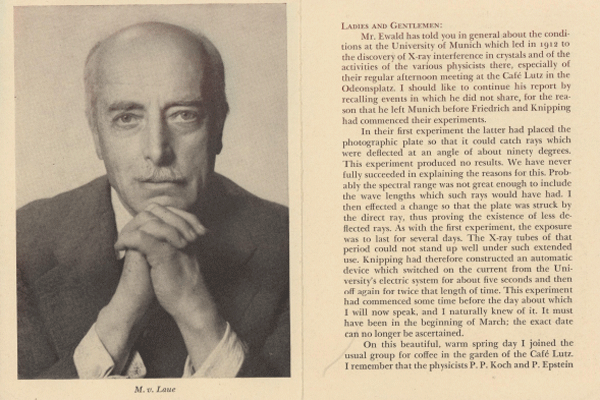 Mr. Ewald has told you in general about the conditions at the University of Munich which led in 1912 to the discovery of X-ray interference in crystals and of the activities of the various physicists there, especially of their regular afternoon meeting at the Café Lutz in the Odeonsplatz. I should like to continue his report by recalling events in which he did not share, for the reason that he left Munich before Friedrich and Knipping had commenced their experiments.

In their first experiment the latter had placed the photographic plate so that it could catch rays which were deflected at an angle of about ninety degrees. This experiment produced no results. We have never fully succeeded in explaining the reasons for this. Probably the spectral range was not great enough to include the wave lengths which such rays would have had. I then effected a change so that the plate was struck by the direct ray, thus proving the existence of less deflected rays. As with the first experiment, the exposure was to last for several days. The X-ray tubes of that period could not stand up well under such extended use. Knipping had therefore constructed an automatic device which switched on the current from the University's electric system for about five seconds and then off again for twice that length of time. This experiment had commenced some time before the day about which I will now speak, and I naturally knew of it. It must have been in the beginning of March; the exact date can no longer be ascertained. 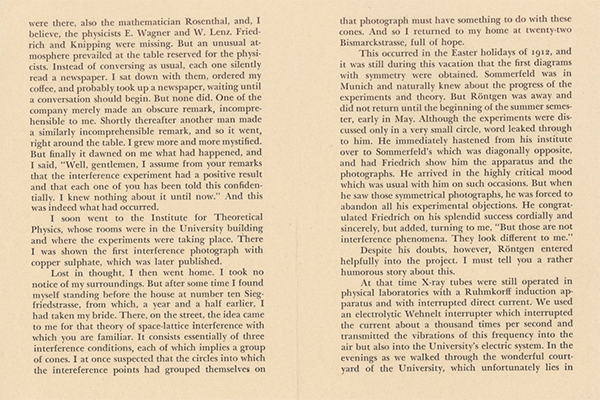 On this beautiful, warm spring day I joined the usual group for coffee in the garden of the Café Lutz. I remember that the physicists P. P. Koch and P. Epstein were there, also the mathematician Rosenthal, and, I believe, the physicists E. Wagner and W. Lenz. Friedrich and Knipping were missing. But an unusual atmosphere prevailed at the table reserved for the physicists. Instead of conversing as usual, each one silently read a newspaper. I sat down with them, ordered my coffee, and probably took up a newspaper, waiting until a conversation should begin. But none did. One of the company merely made an obscure remark, incomprehensible to me. Shortly thereafter another man made a similarly incomprehensible remark, and so it went, right around the table. I grew more and more mystified. But finally it dawned on me what had happened, and I said, "Well, gentlemen, I assume from your remarks that the interference experiment had a positive result and that each one of you has been told this confidentially. I knew nothing about it until now." And this was indeed what had occurred.

I soon went to the Institute for Theoretical Physics, whose rooms were in the University building and where the experiments were taking place. There I was shown the first interference photograph with copper sulphate, which was later published.

Lost in thought, I then went home. I took no notice of my surroundings. But after some time I found myself standing before the house at number ten Siegfriedstrasse, from which, a year and a half earlier, I had taken my bride. There, on the street, the idea came to me for that theory of space-lattice interference with which you are familiar. It consists essentially of three interference conditions, each of which implies a group of cones. I at once suspected that the circles into which the intereference (sic) points had grouped themselves on that photograph must have something to do with these cones. And so I returned to my home at twenty-two Bismarckstrasse, full of hope.

This occurred in the Easter holidays of 1912, and it was still during this vacation that the first diagrams with symmetry were obtained. Sommerfeld was in Munich and naturally knew about the progress of the experiments and theory. But Röntgen was away and did not return until the beginning of the summer semester, early in May. Although the experiments were discussed only in a very small circle, word leaked through to him. He immediately hastened from his institute over to Sommerfeld's which was diagonally opposite, and had Friedrich show him the apparatus and the photographs. He arrived in the highly critical mood which was usual with him on such occasions. But when he saw those symmetrical photographs, he was forced to abandon all his experimental objections. He congratulated Friedrich on his splendid success cordially and sincerely, but added, turning to me, "But those are not interference phenomena. They look different to me." Despite his doubts, however, Röntgen entered helpfully into the project. I must tell you a rather humorous story about this. 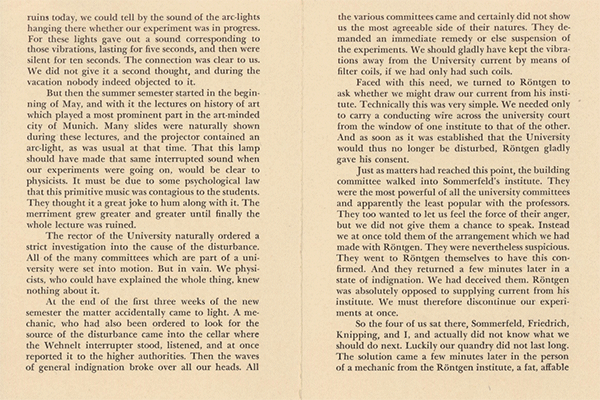 At that time X-ray tubes were still operated in physical laboratories with a Ruhmkorff induction apparatus and with interrupted direct current. We used an electrolytic Wehnelt interrupter which interrupted the current about a thousand times per second and transmitted the vibrations of this frequency into the air but also into the University's electric system. In the evenings as we walked through the wonderful courtyard of the University, which unfortunately lies in ruins today, we could tell by the sound of the arc-lights hanging there whether our experiment was in progress. For these lights gave out a sound corresponding to those vibrations, lasting for five seconds, and then were silent for ten seconds. The connection was clear to us. We did not give it a second thought, and during the vacation nobody indeed objected to it.

But then the summer semester started in the beginning of May, and with it the lectures on history of art which played a most prominent part in the art-minded city of Munich. Many slides were naturally shown during these lectures, and the projector contained an arc-light, as was usual at that time. That this lamp should have made that same interrupted sound when our experiments were going on, would be clear to physicists. It must be due to some psychological law that this primitive music was contagious to the students. They thought it a great joke to hum along with it. The merriment grew greater and greater until finally the whole lecture was ruined.

The rector of the University naturally ordered a strict investigation into the cause of the disturbance. All of the many committees which are part of a university were set into motion. But in vain. We physicists, who could have explained the whole thing, knew nothing about it.

At the end of the first three weeks of the new semester the matter accidentally came to light. A mechanic, who had also been ordered to look for the source of the disturbance came into the cellar where the Wehnelt interrupter stood, listened, and at once reported it to the higher authorities. Then the waves of general indignation broke over all our heads. All the various committees came and certainly did not show us the most agreeable side of their natures. They demanded an immediate remedy or else suspension of the experiments. We should gladly have kept the vibrations away from the University current by means of filter coils, if we had only had such coils.

Faced with this need, we turned to Röntgen to ask whether we might draw our current from his institute. Technically this was very simple. We needed only to carry a conducting wire across the university court from the window of one institute to that of the other. And as soon as it was established that the University would thus no longer be disturbed, Röntgen gladly gave his consent.

Just as matters had reached this point, the building committee walked into Sommerfeld's institute. They were the most powerful of all the university committees and apparently the least popular with the professors. They too wanted to let us feel the force of their anger, but we did not give them a chance to speak. Instead we at once told them of the arrangement which we had made with Röntgen. They were nevertheless suspicious. They went to Röntgen themselves to have this confirmed. And they returned a few minutes later in a state of indignation. We had deceived them. Röntgen was absolutely opposed to supplying current from his institute. We must therefore discontinue our experiments at once. 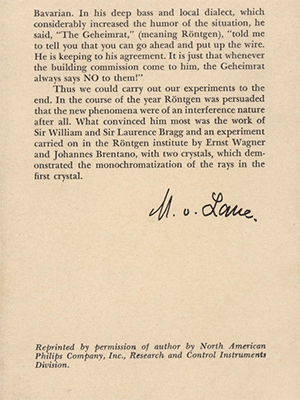 So the four of us sat there, Sommerfeld, Friedrich, Knipping, and I, and actually did not know what we should do next. Luckily our quandry (sic) did not last long. The solution came a few minutes later in the person of a mechanic from the Röntgen institute, a fat, affable Bavarian. In his deep bass and local dialect, which considerably increased the humor of the situation, he said, "The Geheimrat," (meaning Röntgen), "told me to tell you that you can go ahead and put up the wire. He is keeping to his agreement. It is just that whenever the building commission come to him, the Geheimrat always says NO to them!"

Thus we could carry out our experiments to the end. In the course of the year Röntgen was persuaded that the new phenomena were of an interference nature after all. What convinced him most was the work of Sir William and Sir Laurence Bragg and an experiment carried on in the Röntgen institute by Ernst Wagner and Johannes Brentano, with two crystals, which demonstrated the monochromatization of the rays in the first crystal.