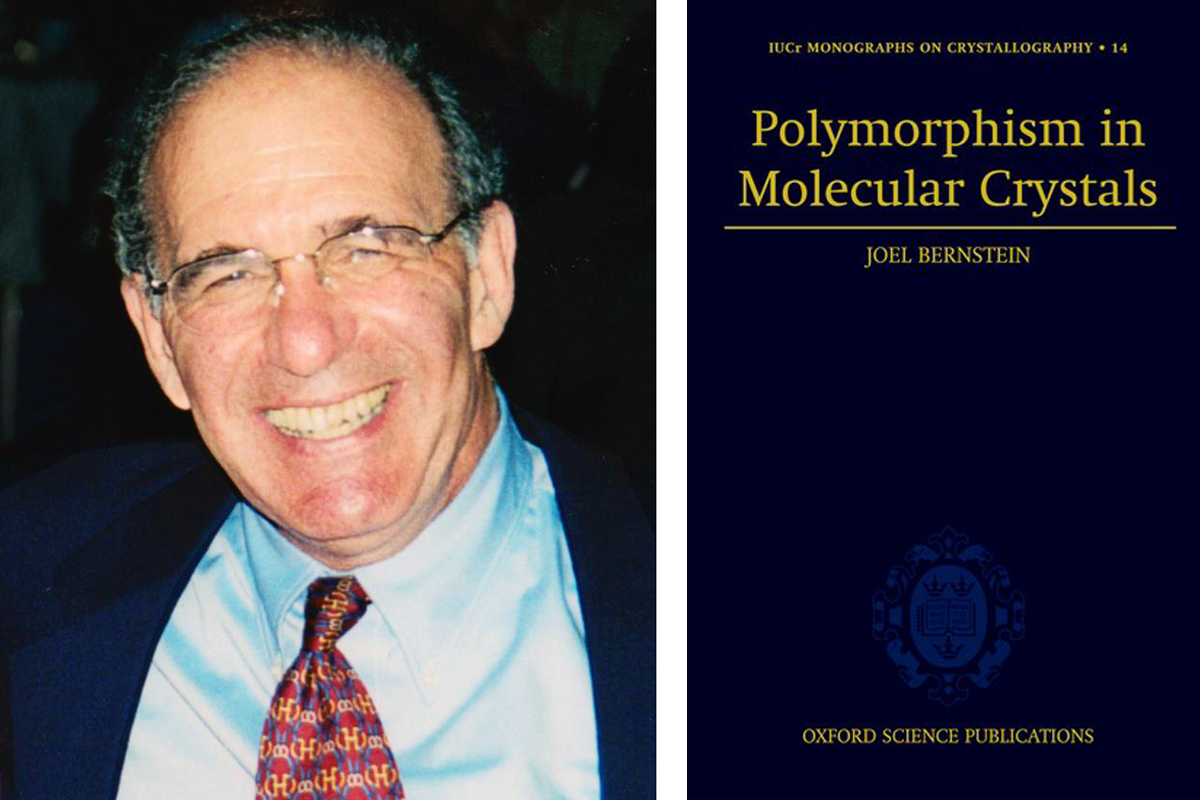 Joel Bernstein at the banquet during the IUCr Congress in Geneva, Switzerland, in 2002, of which he served as Chair of the Organising Committee, and the cover of his famous book.

Joel Bernstein was born on 12 September 1941 in Cleveland, OH, USA, son of Philip and Florence Bernstein. He obtained his BA degree in chemistry from Cornell University (1962) and then after a move to Yale University to study physical chemistry he obtained an MSc in 1964. Continuing at Yale he worked with Basil G. Anex on the solid-state spectroscopy of organic compounds and received his PhD in 1967. Following two-year postdoctoral stints in X-ray crystallography with Ken Trueblood at UCLA and in organic solid-state chemistry with Gerhardt Schmidt at the Weizmann Institute of Science (Israel), he joined the Department of Chemistry of the newly established Ben-Gurion University of the Negev. Later he became the Barry and Carol Kaye Professor of Applied Science at Ben-Gurion University.

In recent years, he focused on polymorphism of molecular crystals and crystal engineering, using the tools of supramolecular chemistry, and the design and preparation of co-crystals of organic molecules. His group made significant progress in developing a successful strategy for the controlled preparation of co-crystals with a pre-designed structure by recognizing and utilizing specific intermolecular interactions. Their studies involved a statistical analysis using the Cambridge Structural Database, high-level molecular orbital calculations and proof-of-concept experiments on prototypical model compounds. Many subsequent experiments, designed to exploit the principles demonstrated by the proof-of-concept experiment, were successful while others produced unknown crystal forms.

Joel was a member of many Editorial or Advisory Boards of scientific journals including the Israel Journal of Chemistry, Structural Chemistry, Zeitschrift für Kristallographie, Crystal Engineering, Crystal Engineering Communications, Crystal Growth & Design and Journal of Pharmaceutical Sciences. He was also a member of the IUCr/OUP Book Series Selection Committee. He served the scientific community as President of the Israel Crystallographic Society; as the Israeli representative to the European Crystallographic Committee; and as chair of multiple international meetings, symposia, summer schools and international prize committees. He was an active member of the community of European crystallographers, and a driving force in the formation of the European Crystallographic Association (ECA) and the establishment of the ECA Prize (now Max Perutz Prize).

On a personal level, Joel was a true colleague and friend, and his vivid personality and rolling laughter will be remembered by his many friends. He spoke enthusiastically about solid-state chemistry, crystallography and polymorphism, as well as other subjects of science. He was a gifted lecturer who attracted large audiences to packed lecture halls.

Joel married Judy Hurevitz in 1966 (deceased 2001). He passed away on 2 January 2019 and is survived by his two sons from his first marriage, Etan Bernstein and Noam Bernstein, and his wife, Tzipi Eynot.

The Israel Chemical Society, the entire community of Israeli scientists and the world of science mourn the loss of a great scientist.

It is a privilege to add a few of my recollections in the aftermath of the entirely unexpected passing of Joel Bernstein. I had the pleasure of meeting Joel first in the mid-1990s, when I started my career as an editor at Oxford University Press. I subsequently worked with him towards publication of his landmark monograph Polymorphism in Molecular Crystals. From the outset, I knew Joel to be a tough but pleasant and entertaining negotiator of general ease, first over the phone, then at many meetings. Writing a book like the 1948 classic by C. W. Bunn, Chemical Crystallography, was his inspiration, ‘a boy’s dream’, as he later called it. No detail was left without consideration, the page layout, the colour plates, the indexed reference list (unusual, but very helpful), the pricing, the cover in the traditional OUP style, cloth binding and brass blocking. The book was published in May 2002, and immediately became one of the bestsellers at the IUCr Congress in Geneva in the same year, and one of the highlights of the whole of the IUCr/OUP book programme.

Joel showed an amazing commitment to the crystallographic community. Besides his own book and research, and a host of university and wider academic duties, he served as a member of the IUCr/OUP Book Committee, introduced us to new authors, kept us posted about forthcoming awards and meetings, proposed new members to serve on the Committee, and was also closely engaged in issues of sales and marketing. During a trip to South America in 2013, he became the driving force of our sales efforts in Brazil in particular.

It was always a special treat to listen to one of Joel’s many interests, starting from science, and including a wide range of related subjects, history, archaeology, law. He was a great storyteller, and there is no doubt that there was at least one other book in him. He knew many renowned scientists and loved to tell about their work but also talk about their backgrounds, their personalities and the connections between them. Joel’s stories were always appreciated by his colleagues and also by students all over the world who remained speechless to his wide and endless knowledge. The promise to his wife Tzipi was that his next book would be a collection of these stories. The experience of being involved as an expert witness in a number of patent litigations, and of consulting on issues of polymorphism and crystal forms, inspired him to think about yet another book of the popular science type, a primer for lawyers who are getting into litigations and need to understand at least some of the science involved. While the idea was on and off, in the end it did not materialise.

Keeping Polymorphism in Molecular Crystals up to date, however, remained a firm commitment. He drafted first plans for a second edition in 2009, and submitted a formal proposal shortly after the IUCr Congress in Madrid a couple of years later. Despite life becoming ‘more complicated’ (as Joel put it) and work on the book repeatedly coming to a hold, whenever asked, he made it crystal clear that there was absolutely no inclination to forego or give up on the 2nd edition. Finally, in May 2018, after two years of intense pursuit of the required revisions, we had the pleasure of a celebratory dinner with Joel in Oxford, marking the formal handover of the completed work. It was the charming modus operandi he had already chosen some 17 years earlier for the handover of the first edition. For the second, it is tragic that Joel’s best efforts didn’t pay dividends for him to see the published book. Extent and price are going to increase, I am afraid to say, but all in line, I hope, with the spirit of our understanding and mutual expectations.

We will miss Joel as an author. We will miss his company, his insights, and the enjoyable discussions at meetings of the crystallographic community. Needless to add, as a publisher, my hope is that his passion for science will live on in the book, and help future generations of readers become as enthusiastic about their studies as he was throughout his life.