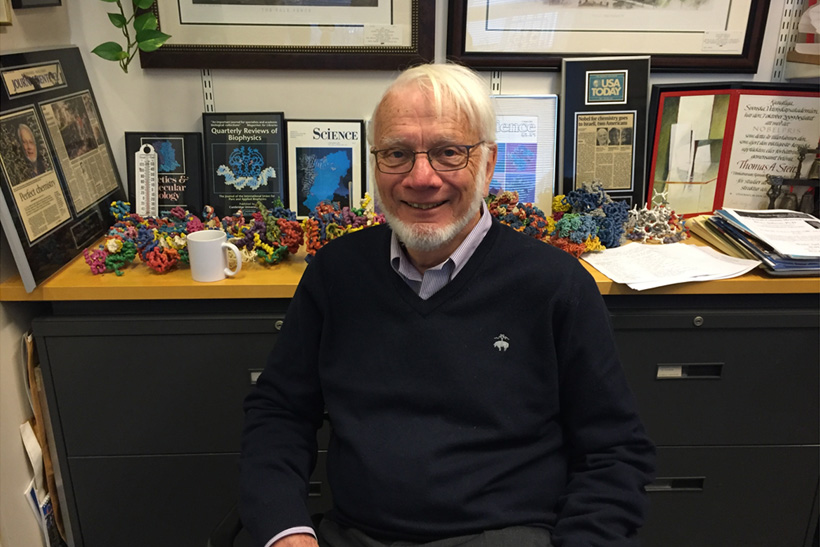 Few have exemplified the scale and impact of macromolecular crystallography like Tom Steitz. His lifelong passion was to bring chemical and biophysical mechanisms to life, and it drove him to the frontiers of what crystallography can do, and how to move them.

After his PhD studies with William Lipscomb on carb­oxy­peptidase and postdoctoral studies with David Blow on the structure and mechanism of chymotrypsin, Tom moved first to Berkeley and then to Yale to set up his own research. Early on he presented pioneering studies of large-scale conformational changes in hexokinase that were associated with substrate binding and catalysis. These experiences stayed with him and became a lasting part of his anecdotes and advice. Quickly, Tom's research became devoted to the key principle of life – the central dogma that describes how genetic information in the form of DNA is transcribed into RNA and translated into proteins of function. Understanding how these processes take place and have evolved define our insight into life as we know it, and it was also very complementary to the grand work of his wife Joan Steitz, who had started her pioneering work on RNA through ribosomes and translation. Dedicated to his quest for the mechanisms of the central dogma, Tom's laboratory presented numerous first-in-class structures of protein–DNA and protein–RNA complexes.

As an undergraduate I learnt of his works from Stryer's Biochemistry. Later as a PhD student I came much closer to it. I was a student of Jens Nyborg at Aarhus University and worked on the crystal structure of the ternary complex of translation elongation factor EF-Tu, GTP and amino­acyl­ated tRNA. Jens and Tom knew each other from the Blow lab, and we had heard rumours that Tom was also interested in that project after a successful attempt at the related elongation factor G, the ribosomal translocase, together with Peter Moore. Fortunately, I had the opportunity to meet him at the famous Erice School of Crystallography in 1994. That went well – he was easy to approach for a young scientist like me back then, and when I asked he responded, e.g. on their experiences with RNA modelling and refinement, sugar pucker, anti and syn conformations etc. The amino­acyl-tRNA:EF-Tu:GTP project had not really taken off in his laboratory. His honest care and interest for what I had to say and wanted to ask were warming and encouraging, and in science where so many consider it a race for trophies, the openness of his aims, strategies and very preliminary work was unusual and quite an example to follow. As he always put it – it is just not fun if what we are really happy about and want to talk about should remain a secret.

Later that year Peter Moore visited Aarhus and presented the EF-G structure from Yale that he and Tom had determined together with John Czworkowski and Jimin Wang (and that Arnthor Aevarsson, Anders Liljas and colleagues had also determined independently in Lund). In 1995 Paul Sigler also came to Aarhus, and he invited me to visit Yale, which I then did the following year after the very first and very exciting meeting of the RNA Society in Madison. To cut a long story short, it was an overwhelming experience to interview all the star groups at Yale, which also included for example Jennifer Doudna, Donald Engelman and Axel Brunger – a superhero community originally nucleated around Fred Richards, and all those laboratories with the very best people.

I had no doubt that the ribosome project with Peter and Tom at Yale was definitely the best choice for a postdoc.

Joining Tom's lab was a transformative experience. When I arrived in 1997, postdoc Nenad Ban, lab technician Betty Freeborn, Peter and Tom had already established a small dedicated ribosome group targeting the Haloarcula marismortui 50S subunit that Ada Yonath's research groups in Hamburg, Berlin and at the Weizmann had also worked on for more than ten years, but without a breakthrough on phasing. Nenad however had obtained low-resolution phases and from two independent sources even: (i) a W18 tungsten cluster derivative producing a single major site, which could be determined from Patterson maps and that produced a very low resolution map, and (ii) by molecular replacement using an H. marismortui 50S envelope obtained by cryo-EM by Joachim Frank's group in Albany. The W18 site derived from both methods was identical – this was clearly before the days of the `resolution revolution' in cryo-EM, and the consistency of the two methods was in itself highly rewarding. Very importantly, Nenad, Peter and Tom – with great input also from Jimin Wang, the wizard crystallographer in Tom's group – had just found out before I arrived that the 50S crystals had a very bad tendency for pseudomerohedral twinning. Some of the W18 derivative data sets would only produce Patterson peaks corresponding to a monoclinic form with twinning, whereas others clearly came from an orthorhombic form – P21 with C2221 twin-symmetry or proper C2221, respectively. That insight was game changing. With the W18 derivatives and compatible native data sets we could sort all data sets and distinguish them as either monoclinic twinned or ortho­rhombic using scaling statistics, and that was from just a few frames of indexed data during data collection at the synchrotron and using excellent advice in the DENZO/SCALEPACK package. After only a month we had identified another two heavy-atom cluster derivatives (a W11 cluster and Ta6Br12) and found the optimal combinations for MIRAS phasing extending to 9 Å resolution. We could publish the first crystallographic maps of the ribosome showing characteristic features of stalks and the central protuberance. Tom was super excited and came with numerous ideas and suggestions thereafter, including many old tricks from his chymotrypsin and hexokinase work. However, he knew very well how to prioritise ideas, which to go all out for and which to abandon quickly.

Our first step to extend the resolution was to obtain phases and maps from independent 50S crystal forms. One of the monoclinic twinned crystals was apparently only partially twinned – what if we could detwin it? Tom knew of some old Fortran code left in the lab by Adrian Goldman for a twin-fraction determination and a detwinning program that he had developed in the 1980s. We dug it out from old tapes and we also found Adrian's (absolutely brilliant) thesis, where the use of it was described. With help from postdoc Graham Cheetham we rewrote the code for the specific case of pseudomerohedral twinning in P21, got it compiled and ran it on the partially twinned data set. Amazingly, it worked: a twin fraction of about 0.35 and the detwinned data set could be solved by the MR procedure. Using higher resolution data sets of the cluster derivative and the MAMA multi-crystal averaging program by Gerard Kleywegt and Alwyn Jones from the Uppsala Software Factory, we could extend the maps to 5 Å resolution and localize several structures of large ribosomal subunit proteins and of the ribosomal RNA. This was quite conclusive, we thought, and knowing that Venki Rama­krishnan had reached similar results on the 30S subunit (presented at the 1999 ribosome meeting in Helsinore), the road suddenly seemed to open up towards the finish line, albeit still at some distance. Tom felt it was time for his sabbatical, and he took it in his own lab working with us on the early map interpretations and model building attempts.

Tom insisted that now we gave up on the cluster derivatives and instead turn to ordinary heavy-atom derivatives that we could easily locate by difference Fourier maps – if only we had enough sites we would get a sufficient signal for phasing. Peter Moore further convinced us by calculating transforms of the cluster derivatives to demonstrate that their amplitudes would almost vanish at a broad intermediate resolution range, where the cluster scattering properties disappear due to individual atom scattering interfering destructively. Tom also insisted that we should try the wonderful Os-hexamine compound that Jamie Cate and Jennifer Doudna had used for RNA crystallography. We had a tiny, small sample and indeed it produced 14 sites from a 1 mM soak but we could not get any more of it, and the 14 sites were not quite enough. Instead, we got similar compounds – Ir-hexamine from Jamie and Os-pentammine from a commercial source. It turned out that we should simply soak with as much compound as possible, and using 20–35 mM crystal soaking conditions we identified more than 40 sites and combined SIRAS, MIRAS and SAD phasing that also included a few other derivatives. These procedures were all handled well by expanded versions of CNS provided by Axel Brunger and Paul Adams.

At the same time we had developed a procedure to grow thick three-dimensional crystals that reproducibly diffracted to at least 3 Å resolution. With great input from Jeff Hansen we also finally nailed the twinning problem so that all crystals were now reproducibly orthorhombic – we simply needed to keep crystals in 1.7 M NaCl or KCl, not 1.2 M as we had used earlier. A single batch of crystals diffracted even further and we managed to collect a 2.4 Å resolution native data set. Combining phases of 3–4 Å resolution derivative data sets, and performing a very gentle density-modification procedure at 2.4 Å resolution with a solvent sphere radius gradually diminishing from 12 to 2.4 Å (a great tip by Eric de la Fortelle of the SHARP group working with Gerard Bricogne), we ended up with electron-density maps of absolutely stunning quality revealing the entire structure of the 50S subunit and basically all details of the RNA and the protein main and side chains. What a moment that was, after years of work – seeing thousands of nucleotides and more than 30 proteins reveal their intimate structure of the 50S subunit and with the peptidyl transferase centre at the middle – the ultimate link between genes and proteins in the central dogma.

Over a few months several of us, now also including PhD students Szilvia Szep, Martin Schmeing and Dan Klein, would trace individual proteins and RNA segments. We were greatly helped by an experimental version of O for RNA provided by Morten Kjeldgaard and we could carry out real-space refinement with TNT, and finally reciprocal space refinement of the entire 50S subunit with CNS. It all just clicked.

It is often said that Tom could have received numerous Nobel Prizes for his work on, for example, tRNA synthetases, RNA and DNA polymerases, and reverse transcriptases, and I couldn't agree more. He really knew how to keep difficult projects going forward, and during my three years as a postdoc on the 50S subunit I never doubted that we were guided in the right direction and always made progress. He would also, in general, be very aware and clear whether a project was `ripe' or not for structural biology, and he would give strong warnings against simple projects that would not tell us much but would still take time, such as determining structures of individual domains of a protein, where the complex with another macromolecule was the actual goal.

With Tom Steitz's passing we have lost a true hero and superhero of crystallography. In times where we all turn towards cryo-EM we should never forget that crystal structures paved the way and still produce the best and most accurate structures. In hindsight, it is also clear how methods developments in crystallography made it all possible – the developers should be remembered also, and Tom did that.