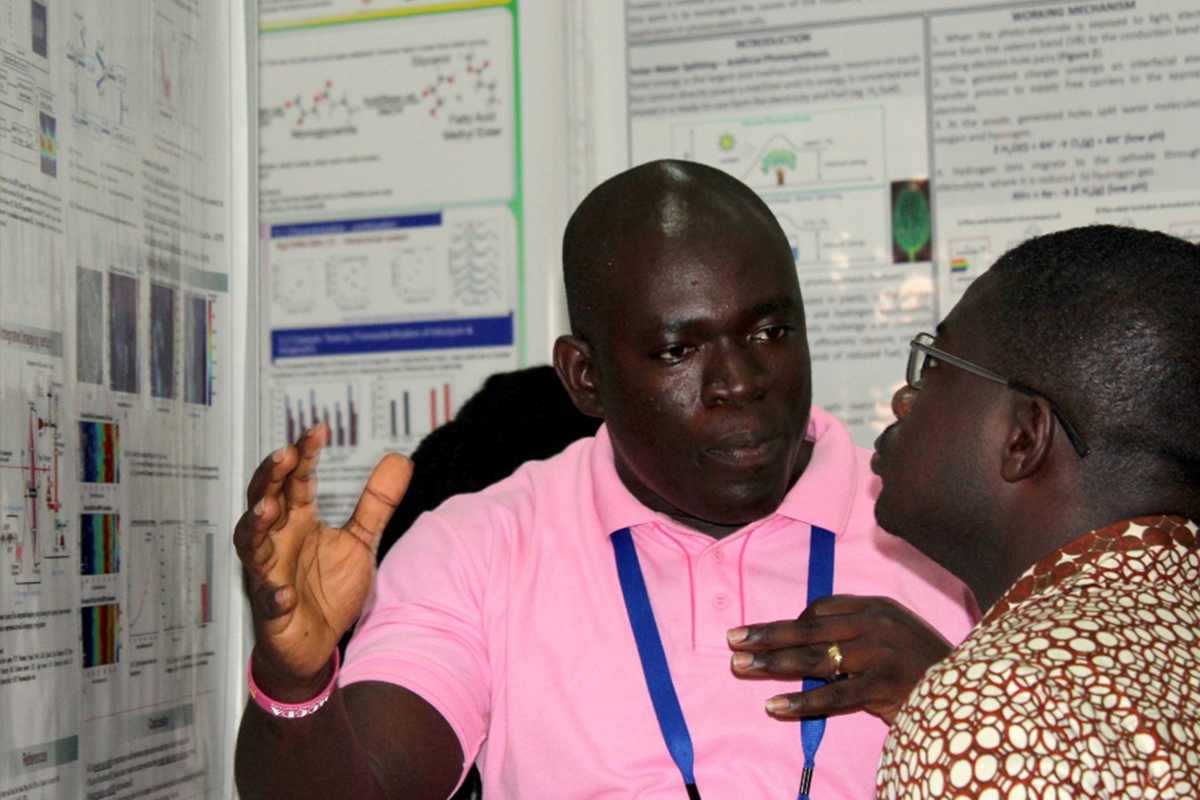 The second Pan African Conference on Crystallography (PCCr2) was held from 28 January to 2 February 2019 in Accra, Ghana. The theme of the conference was 'Crystallography, a tool for sustainable development in Africa', and there were over 200 participants representing around 35 countries from Africa, Europe, North America, Asia and Australia. Activities included workshops, symposia, an exhibition, poster presentations and a varied social programme. The meeting was held jointly with the second African Light Source meeting (AfLS), highlighting the synergy between these two communities.

PCCr2 took place at the well-equipped Bank of Ghana conference centre on the lovely campus of the University of Ghana in Legon-Accra. Activities kicked off with a day of pre-conference workshops. The first of these, the Biostruct Africa workshop, was coordinated by Emmanuel Nji, a postdoctoral fellow at Stockholm University, Sweden. It covered protein crystallography, and included a remote session on beamline I04 at Diamond (UK). There was also an introductory crystallography workshop presented by Gilberto Artioli (University of Padova, Italy) and Claude Lecomte (Université de Lorraine, CRM2, Nancy, France), among others. This workshop included an OpenLab where participants could carry out analysis on their own samples using a benchtop instrument provided by Bruker. This instrument remained on site throughout the conference. During the conference a further well-attended workshop was organised by the Cambridge Crystallographic Data Centre (CCDC), UK, which was led by Amy Sarjeant and Suzanna Ward. 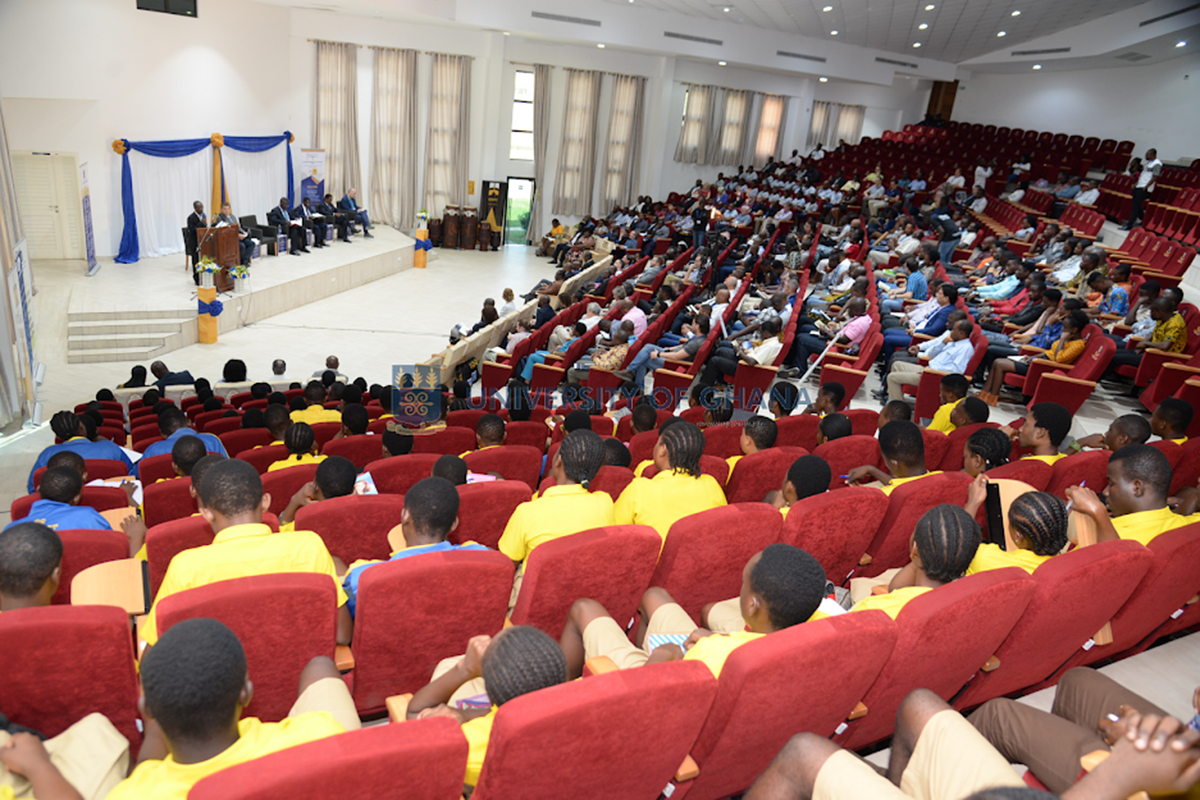 A cross-section of participants at the opening ceremony in the Bank of Ghana Hall.

Ghana is an astonishingly friendly country (I have never encountered such a welcome from customs officials!) and this generous nature was particularly apparent at the official start of the meeting on Tuesday morning, where participants were met by Ghanaian music and dance from the Ghana Dance Ensemble Troupe of the University of Ghana. The opening ceremony was chaired by Robert Kingsford-Adaboh, Dean of the School of Physical and Mathematical Sciences and Chair of the Local Organizing Committee, and had many dignitaries in attendance, including the Pro-Vice Chancellor of the University of Ghana, Kwame Offei; the Provost of the College of Basic and Applied Sciences, Daniel Asiedu; Ivan Addai Mensah; His Excellency Özlem Ergün Ulueren (Ambassador, Embassy of Turkey); His Excellency Timothy Mwaba Walamba (High Commissioner, Zambian High Commission); and Richard Catlow (Foreign Secretary of the Royal Society, UK). 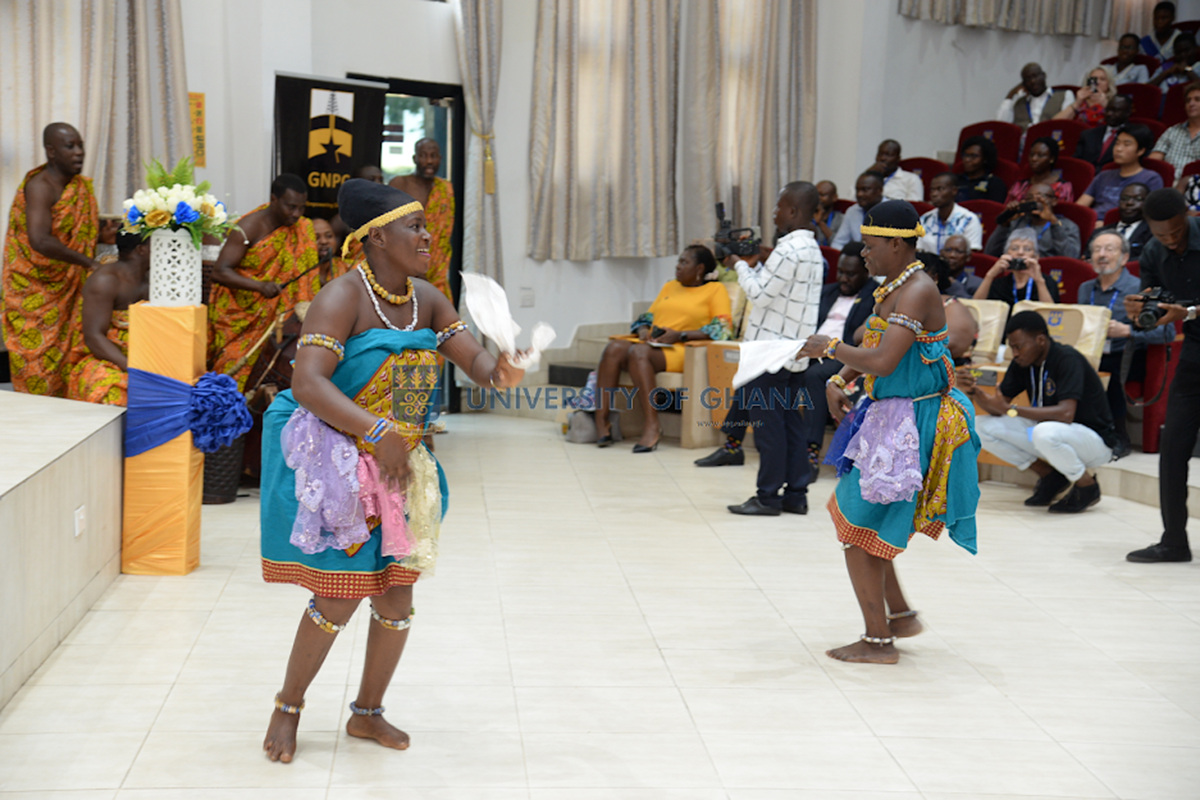 A performance by the Ghana Dance Ensemble at the opening ceremony.

His Excellency the President of the Republic of Ghana’s keynote address was delivered by Kwabena Frimpong Boateng, Minister of Environment, Science, Technology and Innovation, on the theme 'Accelerating Africa’s Economic Growth and Industrial Competitiveness: the role of cutting-edge science, technology and its application'. His Excellency the President, Nana Addo Dankwa Akufo-Addo, described how science and technology have played a major role in the rapid advancement of developed countries and this fact cannot be lost on Africans. He indicated that it was imperative for African governments who desire to undertake a transformative agenda and eradicate poverty to allow science and technology to play a leading role in economic transformation. This clearly stated support of science and technology on the part of Ghana’s government was apparent throughout the meeting. The opening ceremony also included addresses from the chair of the International Organizing Committee, Professor Artioli; the chair of the African Light Source project, Simon Connell (University of Johannesburg, South Africa); and Michele Zema, IUCr Executive Outreach Officer (UK).

The conference consisted of three plenary lectures, as well as parallel sessions organised by both PCCr2 and AfLS. The first plenary was presented by Sir Tom Blundell (University of Cambridge, UK), who gave an inspirational lecture on structure-guided fragment-based drug discovery. A tour-de-force of remarkable science was presented with true modesty, resulting in a lecture all participants will remember. By describing ultrafast out-of-equilibrium transformation with time-resolved techniques at synchrotron and X-FEL facilities, Eric Collet (University of Rennes 1, France) convinced all delegates, with his usual enthusiasm, that the dynamics and thermodynamics of crystals can now be described at the femtosecond scale. Gavin Vaughan (ESRF, France) delivered an exciting plenary on ‘Advanced diffraction techniques for operando and ex situ studies of real systems’.

The PCCr2 parallel sessions covered a wide variety of topics. The session on Biological Macromolecular Crystallography, chaired by Richard Garratt (University of São Paulo, Brazil) and Wolf-Dieter Schubert (University of Pretoria, South Africa), was composed of six speakers including Africans active on the continent (Wolf-Dieter Schubert), Africans currently working abroad [Daouda Traore (Monash University, Australia), Emmanuel Nji and Mike Lawrence (Walter and Eliza Hall Institute, Parkville, Australia)] and non-Africans who have shown interest in the development of the field in the region [Silvia Onesti (Elettra Sincrotrone Trieste, Italy) and Menico Rizzi (University of Piemonte Orientale, Novara, Italy)]. The talks were very diverse in their subject matter, revealing the richness of the work being undertaken, and it was universally agreed that all were of very high quality. Topics raised ranged from techniques for the crystallization of membrane proteins to targets for drug development against diseases relevant to Africa and how information from structural studies on snail insulins could be used for improving the bioavailability of current therapies. The issue of alternative funding opportunities for Africans via international institutions was also raised. Although the community of biological crystallographers in Africa is still small, the session generated enthusiastic discussion among the participants.

Speakers and chairs in the sessions on Biological Macromolecules (left) and Crystal Engineering and Structural Chemistry.

The Wednesday session on Chemical Databases was very well attended – perhaps due to the workshop run by CCDC on the previous day acting as a great ‘warm up’! Ms Ward and Dr Sarjeant started the session with two talks, firstly on the content and approach of the Cambridge Structural Database (CSD) and then on the new kinds of research that it can empower. Tom Blanton from the International Center for Diffraction Data (ICDD) then followed by giving a very insightful talk about how the Powder Diffraction File can be used in tandem with experimental work for investigating advanced materials. In a change from the programme, Philip Rodenbough, a science communicator from NYU Abu Dhabi, described his new approaches to education development that he is designing whilst based in Kenya and the Democratic Republic of Congo. The session was completed by a talk from Samuel Tetteh (University of Cape Coast, Ghana) who discussed insights into some first-row transition metal complexes that were provided by a combined CSD and computational DFT study. 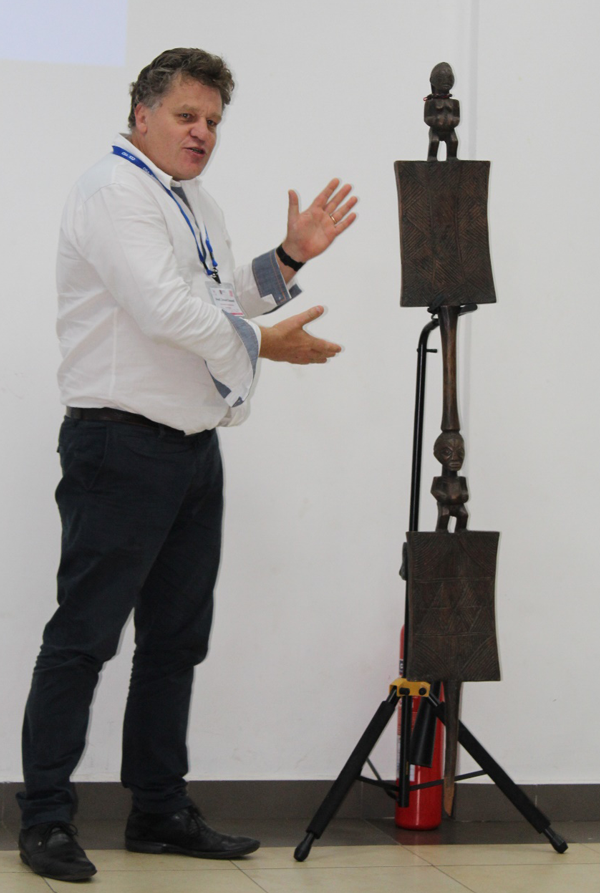 PCCr2 also included sessions on inorganic materials, diffraction physics and phase transitions. Speakers in the plenary sessions and the AfLS sessions were handed a traditional Ashanti speaking stick by session chairs before they could begin their presentation. At Ashanti tribal meetings, the chief used a calling stick to announce a meeting, and gave such a speaking stick to speakers, and the echoing of this tradition gave a wonderful local flair to the sessions. The plenary hall was also graced by a model of vitamin B12 donated to the University of Ghana by Dorothy Hodgkin, who accepted her Nobel Prize whilst visiting Ghana.

The final day of the conference was common to both PCCr2 and AfLS, and involved presentations on large-scale facilities, and a number of productive strategy sessions around moving the plans to construct an African synchrotron forward. The conference closed with a presentation on the progress made in forming an African Crystallographic Association, and a call for bids for the next PCCr.

The conference also included an exhibition, and an excellent poster session. Over 50 posters were presented by both postgraduate students and faculty, and six poster prizes, sponsored by CrystEngComm, IUCr and PCCr, were awarded. 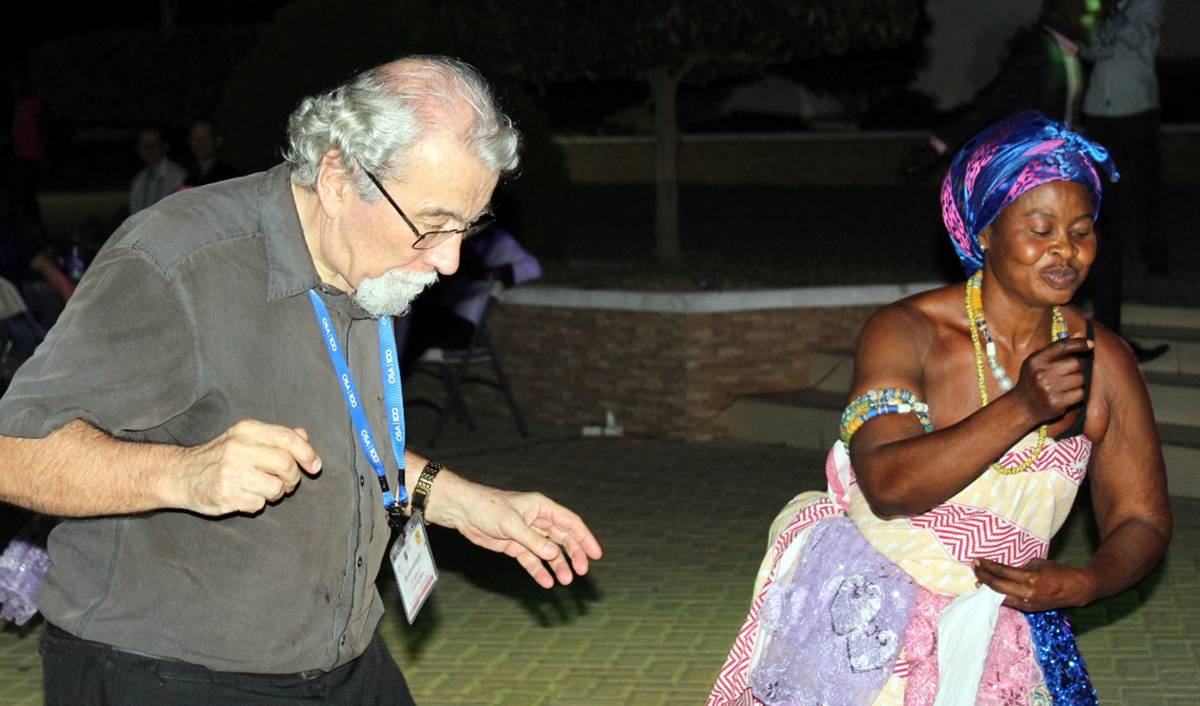 Conference participants were treated to a busy social programme. A tour of Accra introduced delegates to the important monuments in the city, as well as to the skills required to haggle down a price at the fascinating artists' market. A superb conference dinner involved much drumming and dancing, both by the Ghana Dance Ensemble and by the delegates. After the close of the conference, a full day tour to the central region of Ghana was organised, which included an exhilarating canopy walk in the Kakum National Park, a thought-provoking tour of Elmina castle and some crocodiles! 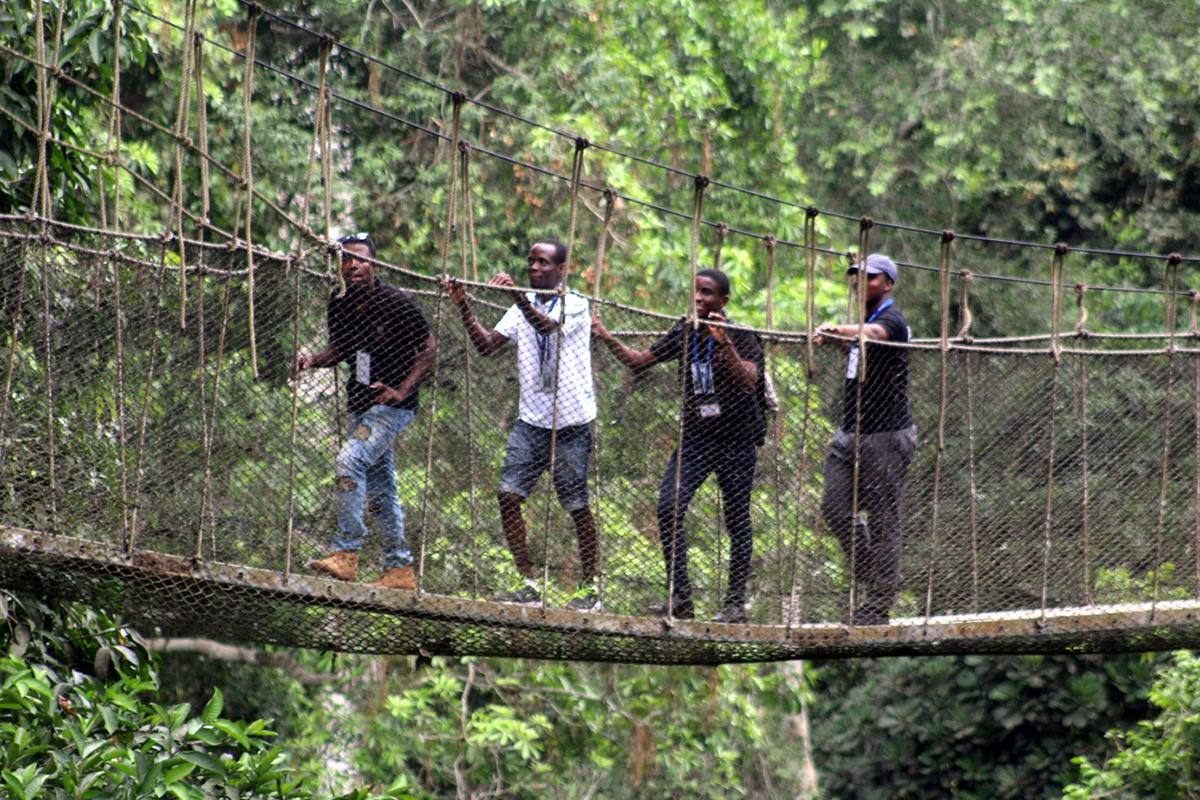 PCCr2 was organised by a dedicated local organising committee, and was run with the support of an endlessly energetic group of students. The meeting was busy and productive, and all participants will have returned home with memories of collegiality and excellent science, the echoes of drums and a fondness for tilapia!

Participants at PCCr2/AfLS2, with the calling stick front centre.
7 March 2019