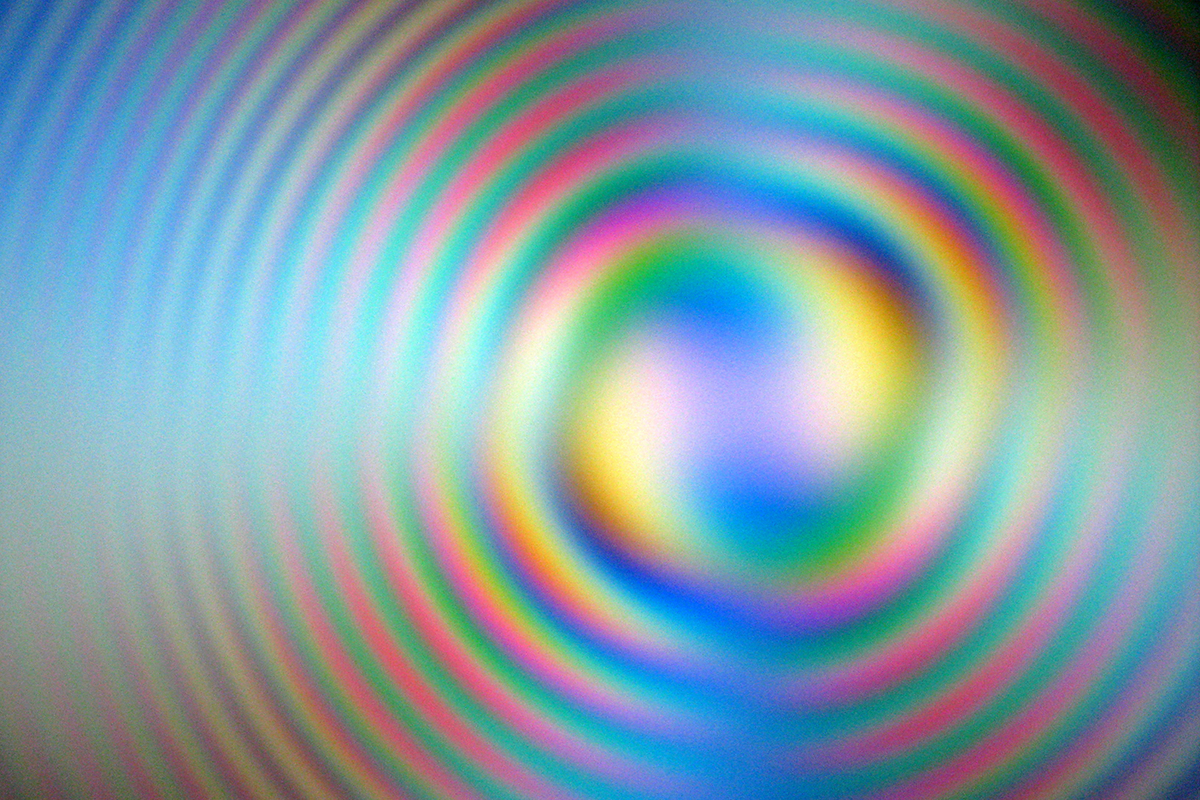 An article in the last issue of the IUCr Newsletter written by the Editor, Mike Glazer, entitled ”Some musings on crystals of quartz” attracted my attention and has prompted me to add some more information on the subject of quartz and its handedness. I sent Mike an email to say that, according to the current literature, it is not the s-face but the x-face that is normally used to tell us about the handedness, and that the handedness of as-grown quartz crystals can be judged by observing the so-called Airy’s spiral. To begin with, there is so much confusion about the definition of right quartz. As pointed out in Glazer’s article, the history of the description of quartz is replete with errors. Traditionally, dextrorotatory quartz has been called right-handed quartz. Sometimes right-handed quartz has been mistakenly described in space group P3121 rather than in P3221. In order to clarify this confusion, I wrote recently a short note in the Journal of the Crystallographic Society of Japan reviewing studies on the optical properties of quartz throughout history and on the determination of the absolute structure. The conclusion is that the definition of right quartz should be unified as dextrorotatory quartz, with citation of the article “Confusion over the description of the quartz structure yet again” (Glazer, 2018). Surprisingly, I realized later that the article “A new view of conoscopic illumination of optically active crystals” (Geday & Glazer, 2002) had also been cited in my accounts on the use of Airy’s spiral (Ohba, 2009, 2014). Here, I will describe the use of Airy’s spiral as a way to discriminate between left and right quartz crystals. 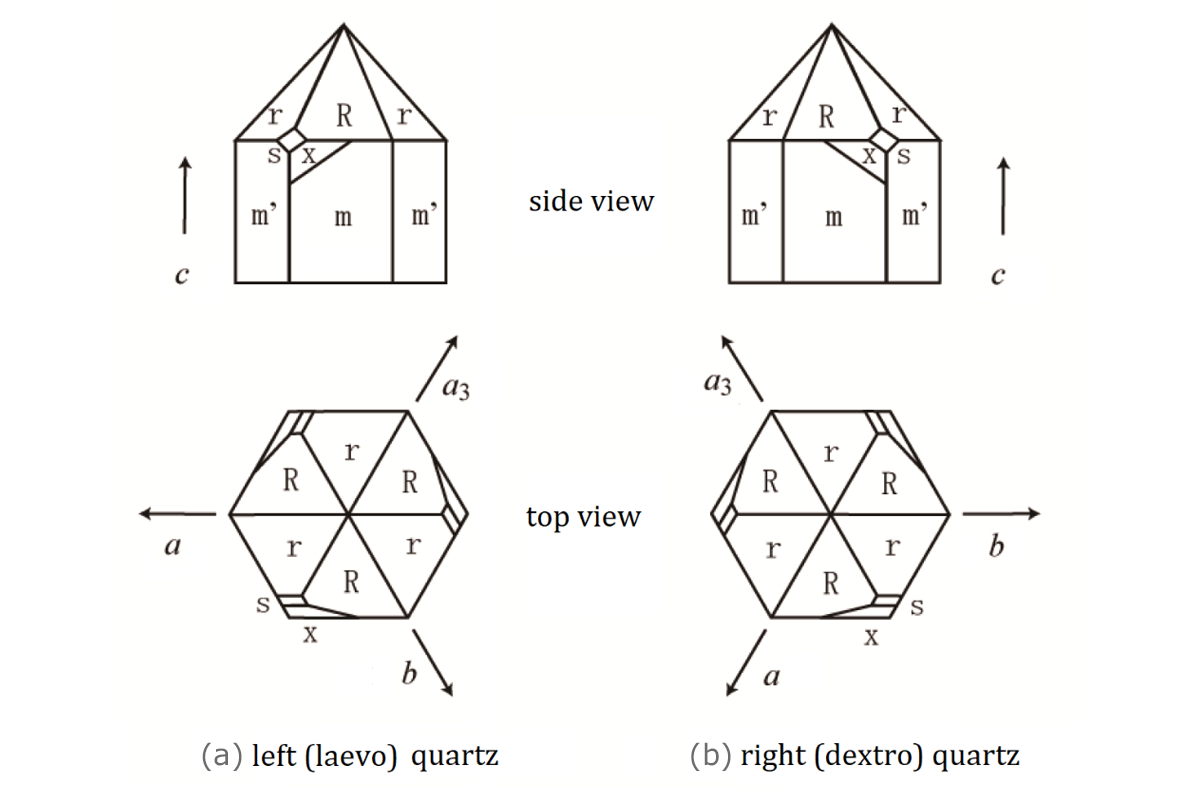 Figure 1. Habit of (a) left- and (b) right-handed quartz crystals. The conventional labels for the faces and the hexagonal axes are indicated.

Fig. 1 shows an idealized habit of the quartz crystals in the low-temperature phase, where the labels of the crystal faces and crystallographic hexagonal axes are indicated. The s face is inclined to the neighboring m and m’ faces at the same angle, 45.7°, calculated from the Miller indices and lattice constants at 293 K.  The conclusive evidence for handedness has historically been given by the x face, which lays nearly parallel to the m face, at an angle of 12.0°.  As seen from Fig. 1, three sets of x and s faces are arranged around the c axis as mirror images between left-handed and right-handed quartz.  In practice, however, it is very rare to see the x face even by looking at the crystal edges with a magnifying glass. 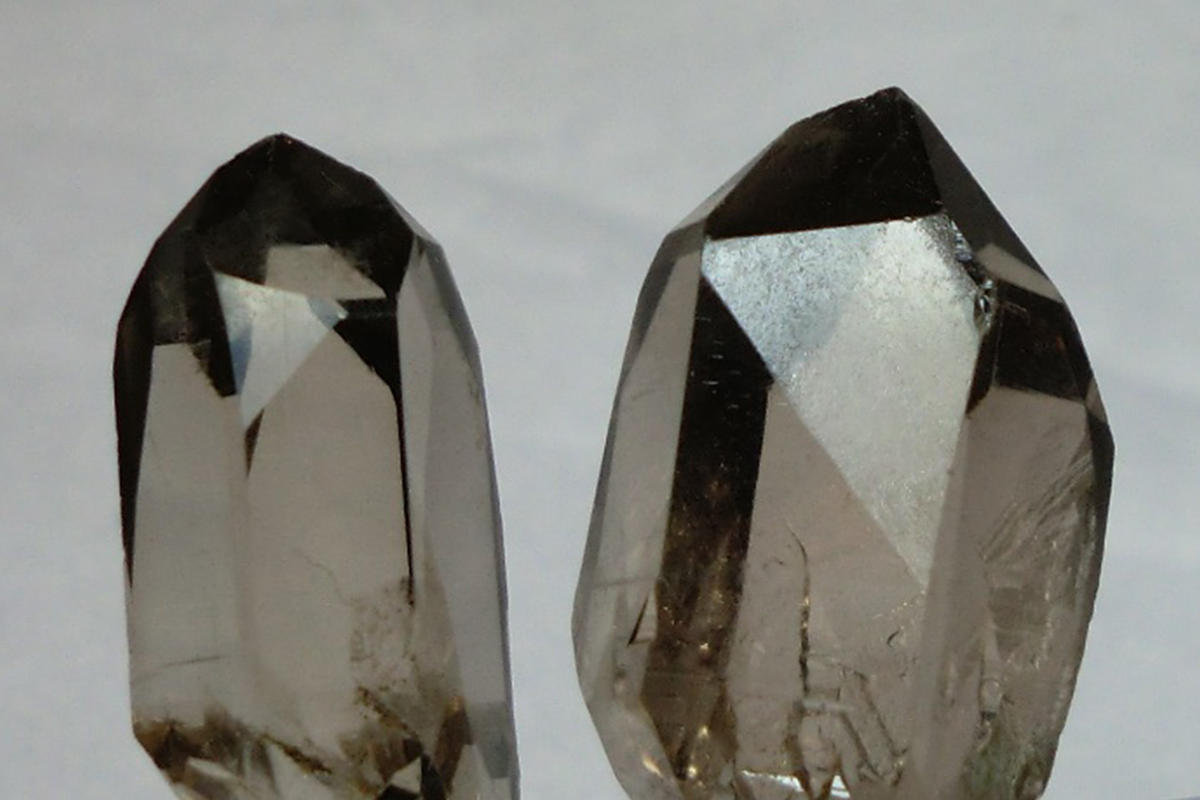 Fortunately, eight years ago I  obtained smoky quartz crystals with apparent x faces (Fig. 2) from the owner of a shop for minerals and fossils, Yoshihisa Yamamoto, who invented several tools to observe Airy’s spiral in quartz including the use of a point prism described below.

Figure 3. A quartz plate (perpendicular to the c axis) between linear polarized plates (a) parallel (b) crossed. 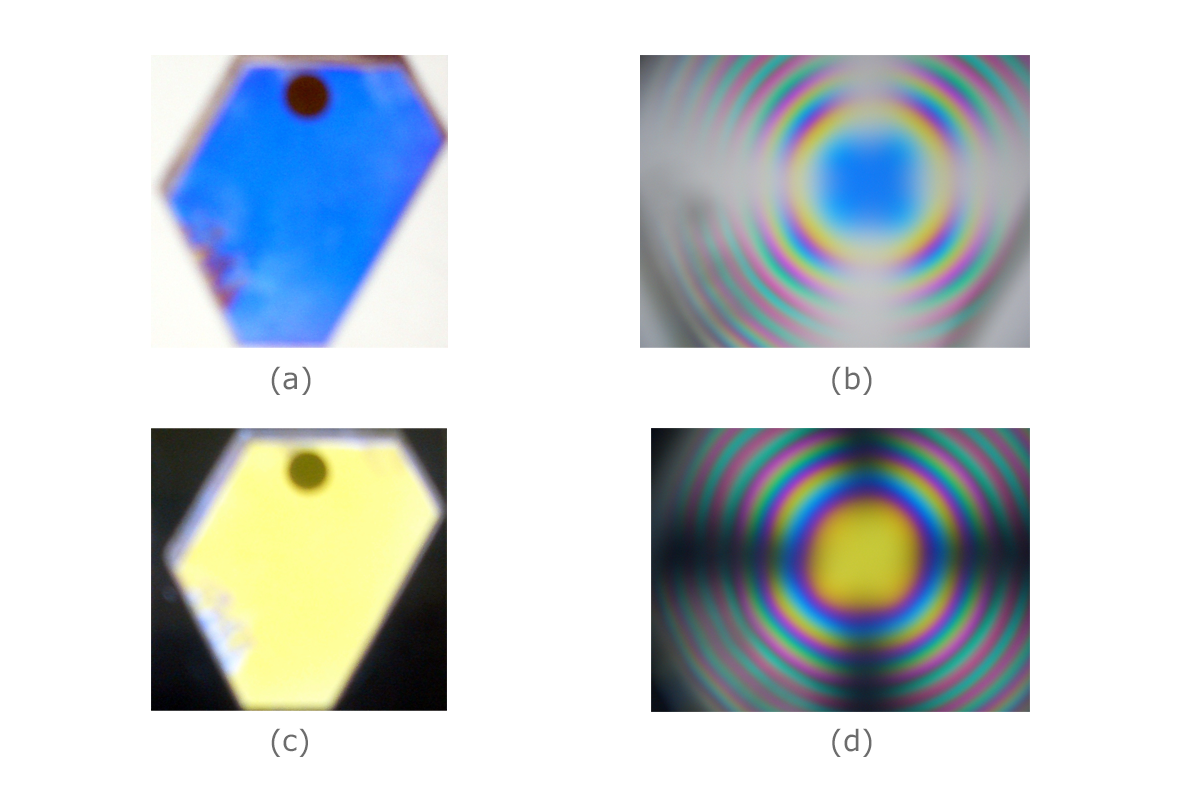 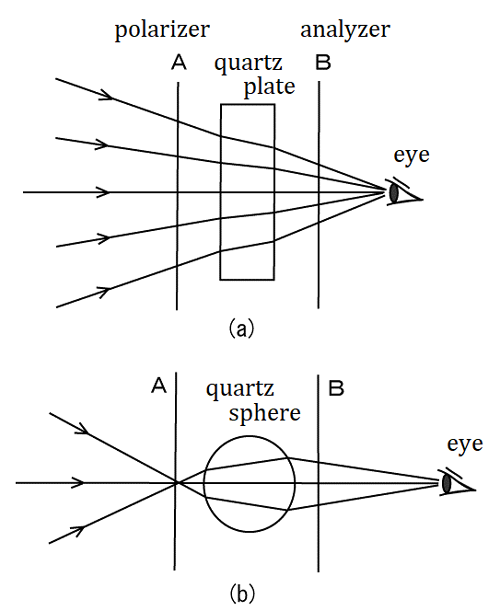 Figure 5. Observation of a conoscopic image by refraction of light through (a) a quartz plate and (b) a quartz sphere.

Quartz is an optically uniaxial material, and the crystallographic c axis is the optical axis. This means that the velocity of light propagating along c in the crystal is independent from its polarization direction. If the quartz crystal is cut into slices perpendicular to the c axis, and a piece is placed between two polarizing plates (Fig. 3), an image of the crystal will appear in a single color (Fig. 4). The color may depend on both the thickness of the crystal plate and the relative orientation of the polarizers. This is due to the wavelength dependence of the specific rotation of quartz, which is optically active in the c direction. The oscillation direction of the polarized light rotates on passing through the quartz crystal, and if the total rotation angle is 90° it will be interrupted by the 2nd polarizer (analyzer) when the polarizers are in parallel, but pass through in the crossed setting. Therefore, different colors appear according to the orientation of the analyzer. When your eye or camera lens comes very close to the analyzer, fringes may appear because farther from the center of the view the light wave has passed through the crystal at a larger inclination angle to the c axis (Fig. 5). The interference occurs because of the birefringence, i.e. light of the same wavelength will split into two components with different velocities depending on the direction of oscillation in the crystal, and they will interfere with each other. Furthermore, if the analyzer is changed from a linear to a circular polarizer, the circular fringes become a double spiral known as Airy’s spiral after G. B. Airy, a famous astronomer in the UK (Fig. 6). The chirality of the spiral is related to the optical rotatory power of quartz. One thing to note is that both the right and left circular polarizers are available, but if the analyzer is replaced with the other type, the handedness of the Airy’s spiral remains the same although the bright and the dark regions of the interference image are exchanged. For a quartz sphere, Airy’s spiral can also be observed when the c axis is directed parallel to the line between the light source and the observer’s eye (Fig. 7). Remember that the definition of left and right is important. For Airy’s spiral, start at the center, and then trace a curved line of the same color towards the outside. A clockwise Airy’s spiral corresponds to right-handed quartz, and an anti-clockwise spiral to left-handed quartz.

Figure 6. Conoscopic images of a (a) left-handed (b) right-handed quartz plate 4 mm thick using a circular polarizer as the analyzer. 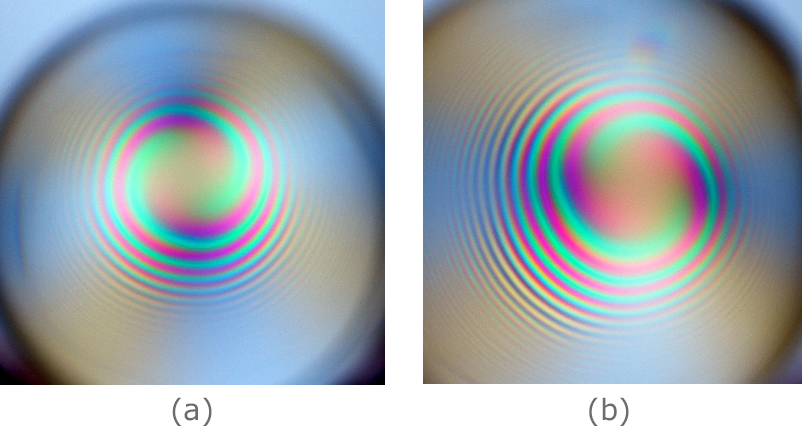 Figure 7. Airy’s spiral for a (a) left-handed (b) right-handed quartz sphere 15 mm in diameter.

For an as-grown crystal, its Airy’s spiral can be looked at if the specimen is optically clear and the bottom is flat by cutting perpendicularly to the c axis. Mr Yamamoto has developed a neat tool called a point prism (Fig. 8). A circular polarizer and a triangular prism are glued onto a glass pedestal. On the inclined (R or r) face of the quartz crystal, the point prism is placed in contact with a small amount of water, and polarized white light enters from the bottom of the crystal. Then through the point prism you can see Airy’s spiral or part of it for each R and r face, a total of six faces (Fig. 9). The larger the quartz crystal, the sharper the fringes of the spiral. The normal direction of the inclined (R or r) face to the c axis is 51.8°, which is almost compensated by the angle of the prism (45°). The clever trick is that the refractive index of the optical glass is nearly the same as that of quartz, and the light passes almost equally through them. The water at the plane of contact helps to avoid any scattering of light. As shown in Fig. 10, the paths of the waves propagating in a direction inclined by α to the c axis differ from each other. However, the effect of the path difference due to birefringence is the same for small differences in α. This is the reason why Airy’s spiral is observed as a circular shape without apparent distortion. Interestingly, if the spiral is observed only for one of the inclined faces, this tells you that the crystal has been cut and polished from a larger crystal to look like a natural crystal of quartz without reference to the axes. I came across such a specimen and learned why it was so cheap for such a huge size! 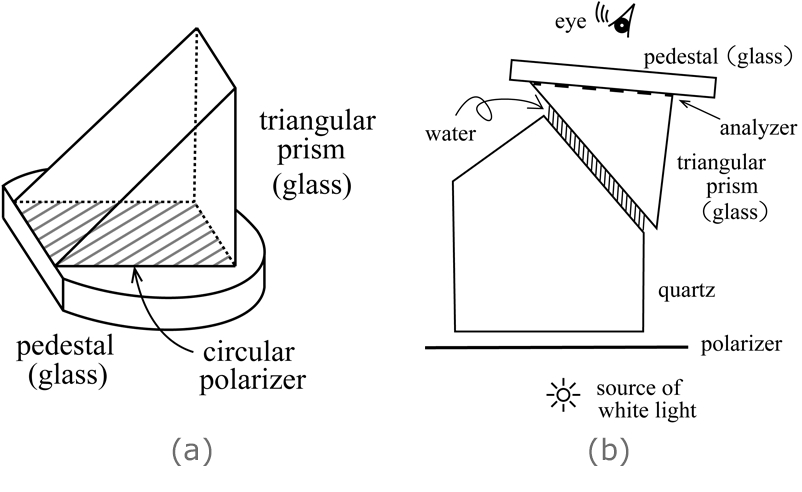 Figure 8. (a) Point prism consisting of an isosceles right triangular prism 3 cm in length and width and a glass pedestal 8 mm thick, and (b) how to use it.

Figure 9. Airy’s spiral for (a) left-handed and (b) right-handed as-grown quartz crystals, the bottoms of which are flat perpendicular to the c axis. Sizes are (a) 2 x 2 x 3 cm and (b) 3 x 4 x 4 cm. Photographs taken with a camera lens attached to the point prism. 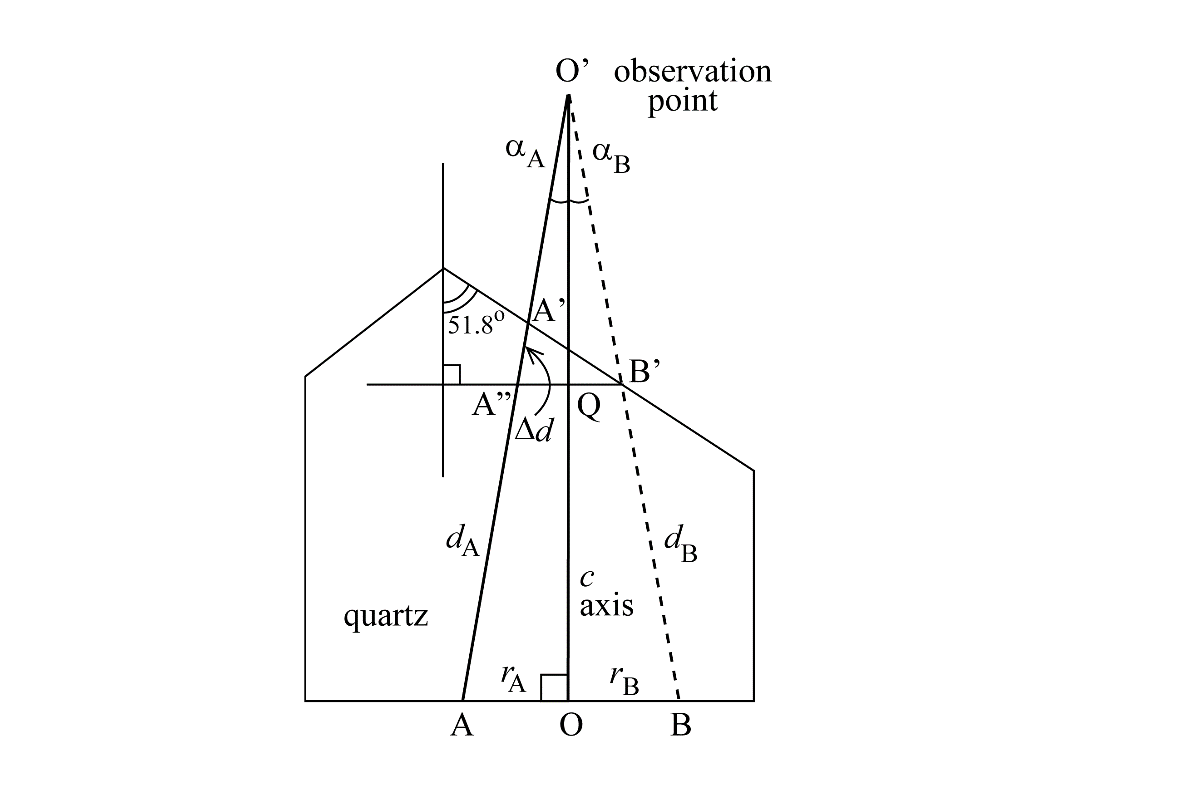 Figure 10. Path differences for light propagating from the bottom of a quartz crystal to an inclined R or r face at the top. When the semi-apex angles αA and αB are the same, the path A–A' in quartz is longer than B–B' by Δd.

Lastly, I would like to thank Mr Yamamoto who provided me with the point prisms, and Mike Glazer for encouragement and advice on this manuscript.