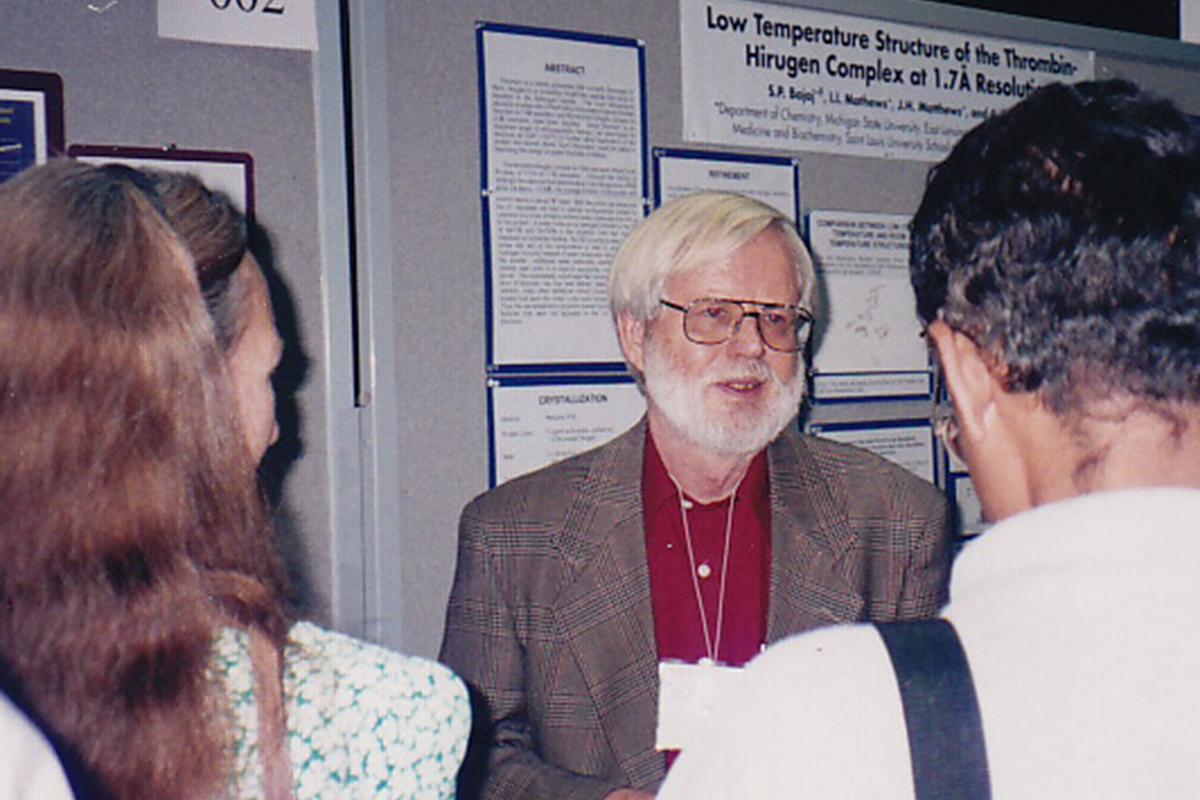 Håkon Hope died peacefully at home in Davis, CA, USA, on 22 November 2018, surrounded by his family. Born in Førde, Sunnfjord, Norway, on 15 December 1930, Håkon attended the University of Oslo, earning his PhD with Nobel Laureate Odd Hassel as his supervisor. After a postdoctoral fellowship at UCLA on a Fulbright travel grant, Håkon was hired by the Chemistry Department of University of California (UC) at Davis in 1965, becoming full professor in 1973. As an Emeritus Professor of Chemistry at UC Davis since 1993, he remained active in teaching, mentoring students and colleagues, solving crystallographic problems and attending crystallographic meetings, contributing more than 200 publications.

Håkon is most remembered scientifically for his accurate data collection and cryocrystallography of small and particularly of biomolecules. He was a supremely gifted experimentalist, who also understood the physics of data collection better than most. His contributions to cryocrystallography date from his own postdoctoral and graduate student days in Norway, where he developed some of the early cryoinstrumentation. In 1967, he designed and built a cryostat for cooling crystals to about 110 K using a cold N2(g) stream for the (UC Davis) laboratory Picker diffractometer, according to Marilyn Olmstead, his postdoctoral fellow and Emeritus Professor of Chemistry, UC Davis. His careful specifications for the reduction of turbulence were key to preventing ice formation.

Sean Parkin, Håkon’s last graduate student and now Director of the X-ray Facility at University of Kentucky, Lexington, USA, shares: “In terms of small molecules, he was decades ahead of his time. With Ulrich de la Camp, he was the first to demonstrate absolute configuration of light-atom compounds in the late 1960s [Acta Cryst. (1972). A28, 201-207]. As a follow-on from charge-density work with Fred Hirshfeld, Ed Stevens (Håkon’s graduate student in the early 1970s) and others, he devised experiments to extract accurate hydrogen atom positions from X-ray work [e.g. Hope and Ottersen (1978). Acta Cryst. B34, 3623-3626]. His work on rapid structure determination [Hope and Nichols (1981). Acta Cryst. B37, 158-161] presaged the current situation in small-molecule crystallography. His insight in that regard was that the data collection had to give sufficiently good counting statistics, and that scan rate was just one factor involved.”

Håkon was the first to apply low temperature combined with a unique mounting technique to protein/biomolecule crystal data collection. When I met him in 1984, he cleverly devised a way to stabilize pyrophoric small molecules for cryocrystallography using a drop of neutral oil at the end of a fine capillary mounted in a copper pin. With this ingenious method, he could mount the crystal air free, cool it in liquid nitrogen, and transfer it to a nitrogen stream on a diffractometer. He made special tongs with a high thermal mass block to keep the crystal cool from the microscope to the diffractometer.

At the Stanford American Crystallographic Association (ACA) meeting in 1985, we discussed extending his method to protein crystals. We proposed cooling crystals of the small protein I was studying (crambin) to liquid nitrogen temperatures with his method. Later that year, he collected X-ray data to 0.83 Å resolution and 130 K. This cooling greatly reduced thermal vibration, enhanced the intensity of data at higher resolution, permitted stable, full-matrix refinement and clear modeling of more disorder in side chains and solvent that was present only weakly at 300 K.

Another example of Håkon’s inventiveness and experimental prowess came to my attention in 1987. I was visiting the Weizmann Institute (Rehovot, Israel) and found that Håkon was also there. He had just created a small glass double-platform support for ribosome crystals grown by Ada Yonath of the Weizmann Institute. With this physical stabilization and application of liquid nitrogen to the crystal, they were able to considerably extend the lifetime of ribosome crystals in the X-ray beam. It was this pivotal event, coupled with Ada’s persistence in looking for better crystals and large heavy-atom clusters, that led her and others to the solution of the ribosome structure and Ada’s sharing the 2009 Nobel Prize in Chemistry.

Ada summarizes the significance of Håkon’s cooling methods: “Håkon’s bold attitude led to the development of what became routine in the entire field of biomacromolecular crystallography almost instantaneously, within less than half a year. Thus, not only several ribosome structures could be determined at atomic resolution, over 50,000 new and significant biological structures were elucidated at cryotemperature, many of which were not suitable for the traditional data collection for various reasons.”

He continued to develop these cryocrystallography techniques for biomolecules and popularize them. Later he extended them to liquid helium data collection. He worked closely with several synchrotron sites to freely share his experimental procedure and apparatus.

Håkon delighted in teaching crystallography both in class and in informal conversations, at UC Davis Chemistry, at ACA and at IUCr meetings, which he attended since 1968, hardly missing one. He mentored generously, always advocating for his very high standards of data collection and refinement for determination of accurate structures and engaging young and older scientists in the discourse. At UC Davis, he also made “crystallography available to members of the (Chemistry) Department. The possibility of doing crystal structures was exciting for many members of the faculty and the X-ray lab became a significant resource for their research,” reports Marilyn Olmstead.

Håkon challenged many to think about their crystallographic data and refinement in order to create the best possible structures. He was able to ensure this attention to detail on an international level as a member of the IUCr Commission on Crystallographic Apparatus (1978-1984) and Co-editor of Acta Crystallographica (1984-1993). In 1994, Håkon received the Doctor Honoris Causa from the University of Oslo, Norway. In 2015, Håkon was elected a Fellow of the ACA.

Håkon will be deeply missed by his crystallographic colleagues, both as a friend, colleague and mentor.