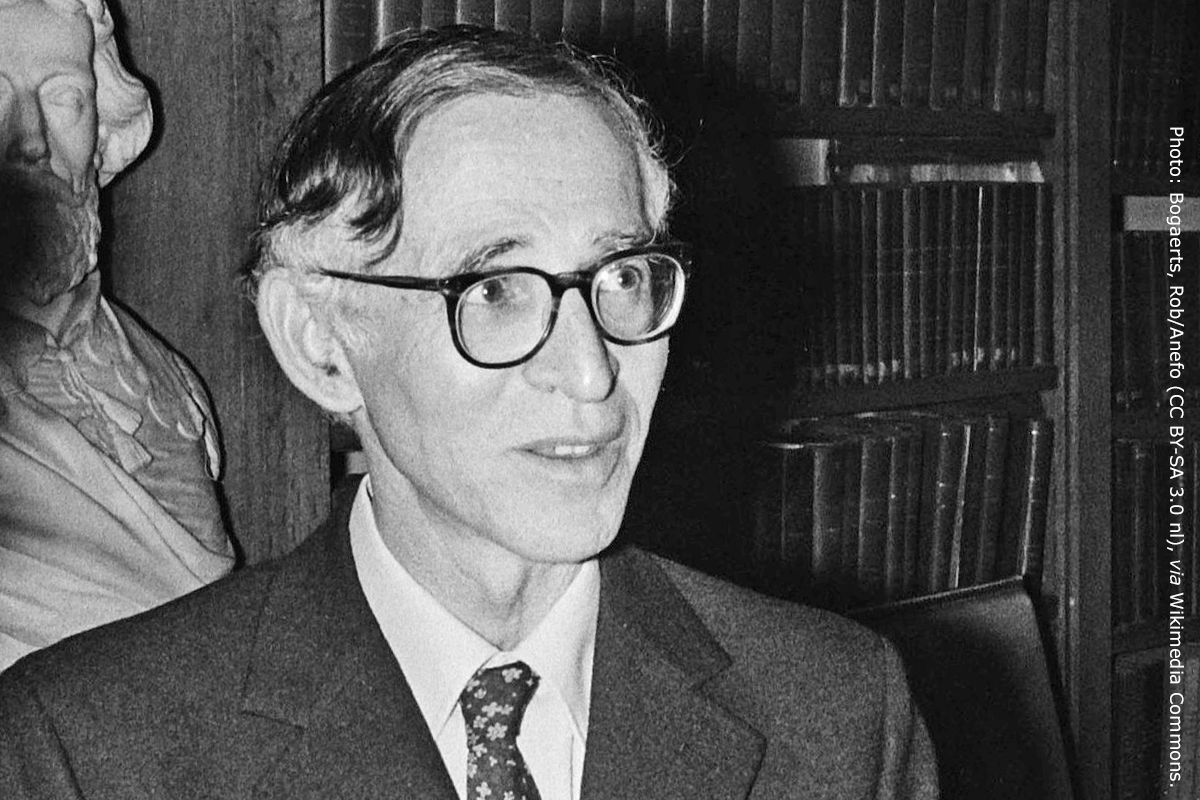 Aaron Klug was one of the last giants who were members of the MRC Laboratory for Molecular Biology (LMB) in Cambridge, UK, right from the start. I remember how he showed me “The Hut” in the yard of the Cavendish Laboratory in 1978. He said: “In this building, now used as a bicycle shed, five Nobel Prizes were produced: Watson and Crick for the DNA double helix structure, Max Perutz and John Kendrew for the first protein structures and Fred Sanger for inventing amino acid sequencing. But now, with our huge, modern and well-equipped laboratory there are no Nobel Prizes”. It would take four years until Aaron got the Prize himself, and after that they have come one by one in a steady stream.

Aaron was born in Lithuania in 1926, but his family emigrated to South Africa when he was only two years old. He came to England in 1949 with his wife Liebe Bobrow, a professional dancer, and went to do his PhD at Cambridge University. He wanted to study X-ray crystallography on proteins, but got to work on phase separations in steel. One thing he studied was that of nucleation and growth in a phase change, which later was extended to the self-assembly of tobacco mosaic virus (TMV). He then in 1953 went on to work in J. D. Bernal’s department at Birkbeck College in London. There he met Rosalind Franklin who introduced him to X-ray crystallography and diffraction of helical structures. “From then on my fate was sealed” he recalled in his Nobel speech in 1982.

Rosalind Franklin showed Aaron diffraction patterns from helical structures, including DNA, and he learned to interpret diffraction patterns just by looking at them. This became a great help for several projects, especially when he started to work on electron microscopy. There are two main problems for electron microscopy on biological samples: low contrast and specimen damage. Both can be overcome by staining the sample with heavy metals (U, Os, I, etc.), but at the expense of limiting the resolution. The low contrast is due to the fact that biological samples contain some 50% hydrogen atoms, which are so light that they are hardly detected by X-rays or electrons, and then C, N and O, which are also light elements and of adjacent atomic numbers. It was long unclear if the stain showed the top side of thin samples or perhaps just the bottom half as in a footprint, as would be the case if the stain were sucked in by capillary forces. Klug showed in a brilliant experiment that in fact both sides are seen. The proof was that the diffraction pattern of phage tails must be due to two distinct crystalline patterns one on top of the other, identical but with different orientations. At that time, computers were not yet powerful enough to calculate a Fourier transform of an image, so he had to use a laser beam on the negative electron micrograph.

Klug went on to study both helical viruses (such as TMV) and spherical viruses and showed that the latter were all of icosahedral symmetry. He then showed, with Caspar, that all spherical viruses had to be icosahedral in order for the small protein molecules of the virus shell to cover the much bulkier viral DNA or RNA. A cube has 6 sides of 4-fold symmetry, i.e. 24 identical copies of protein, whereas an icosahedron has 12 pentamers, so 60 identical units, and only this is enough to completely cover the DNA or RNA. These are examples of how Aaron Klug frequently combined a deep knowledge of mathematics and physics, with a broad understanding of biology and chemistry, into fundamental breakthroughs in molecular biology. He was also interested in the philosophy of science, as shown by the following example. During attempts to crystallize the coat protein of TMV, they kept getting the uncomfortably large discs of two layers of 17 (!) protein subunits each. They derived a rather elegant scheme for the assembly, but later found out that “Every detail of this scheme is wrong. But the idea is correct!” The idea of course was that the virus assembly never happens haphazardly, but in some highly organized way. Often Nature does things in a smarter way then we humans first think of.

Aaron was, as all crystallographers with some self-respect, also interested in the classical phase problem in X-ray crystallography, i.e. the fact that the phases of the diffraction spots are not available in diffraction patterns. He argued that one could look at the interference patterns of adjacent pairs of diffraction spots in the optical transform seen in the laser beam. But then (in 1968) he realised a much better solution: to calculate by computer the Fourier transform of a scanned EM image of the crystal. This directly gave the experimental phases in degrees. He went on (with Erickson in 1970) to show the effects of changing the focus of EM images, where the contrast transfer function (CTF) varied in a way close to that predicted in optics. Already in 1979, with Nigel Unwin, he showed that the crystal structure of a metal oxide could be clearly identified from any of the EM images in a series of images taken at different focus values. This crystallographic image processing has been used in molecular biology, especially on crystalline membrane proteins (Unwin and Henderson 1975), and in inorganic chemistry. Unfortunately, in inorganic chemistry this absolutely fundamental understanding was still denied by many physicists for 40 years, which hampered the development of electron crystallography on inorganic samples. For decades, the crystallographic structure factor phases were directly experimentally available in EM images of proteins and used to determine their structures. In numerous electron microscopy and crystallography conferences this was the situation on one side of the corridor, where biology sessions were held, while the opposite was true on the other side of the corridor. There, the phase information was considered as lost in images as it was in diffraction patterns.

Realising that a single image of a periodically repeating particle, such as for example a spherical or helical virus, contains many different views of the same protein molecules, Klug went on to quantify the Fourier components of such particles. With algorithms and computer programs derived by Tony Crowther and Gérard Bricogne, this allowed 3D reconstructions of both helical and spherical particles. It also allowed Aaron Klug to derive the kind of information needed for 3D structure determination of much bigger objects, including human bodies. This was crucial for whole-body tomography scans in medicine, for which many (including Aaron himself) thought he should have shared the Nobel Prize in Medicine.

After having derived the theoretical basis for electron crystallography, Klug largely continued with X-ray crystallography. He solved a number of very large biological macromolecules such as transfer-RNA, the protein disk of the helical virus TMV and chromatin (with John Finch, Daniella Rhodes and Tim Richmond). During the last decades of his life, he was mainly interested in the structure and function of zinc fingers, common proteins of great biological and medical importance.

As if all of this had not been more than enough for a single person, Aaron Klug also became involved in administration, becoming first the head of the structures division at LMB, then the director of the entire LMB and president of the Royal Society.

While being very humble as a person, he firmly believed in his theories. A classical example is from an early small meeting for the world’s protein crystallographers. While everybody knew the theory of Caspar and Klug that all spherical viruses have icosahedral symmetry, one group presented an exception. Their virus was of cubic symmetry! As confident as Mendeleev was when one element (indium) didn’t fit into his Periodic Table and when he frankly declared that the molecular weight must have been wrongly determined, so was Aaron Klug confident that all spherical viruses are icosahedral. So, Aaron interrupted the speaker and said “no that is wrong”. When asked how he could know that, he answered “I can’t explain it now here, but I will work it out tonight and tell you tomorrow. Please go on.” And so he did; next morning he showed that the packing, i.e. the space group of the virus crystals, is cubic, but the symmetry of the virus particle is icosahedral. As with Mendeleev, of course he was right.