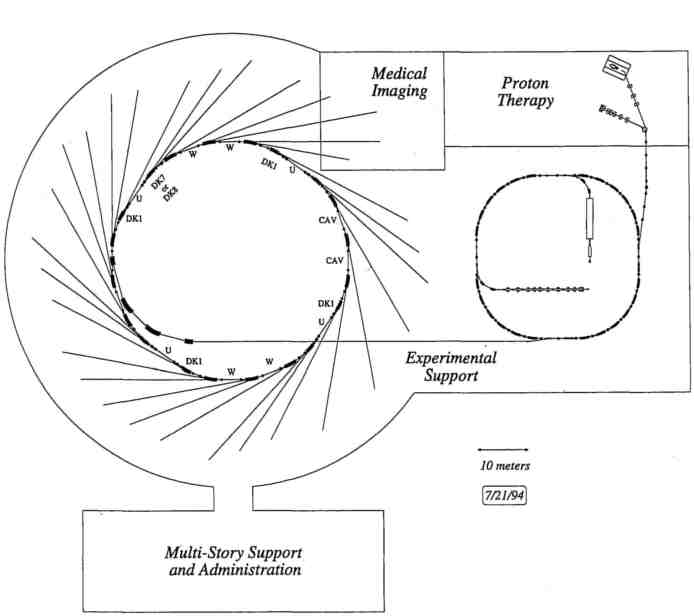 A schematic layout of the proposed NC STAR facility showing a possible relationship between the storage rings, injectors, beamlines, and support facilities and laboratories.

North Carolina State University (NCSU), in conjunction with other universities, national laboratories and industrial partners, proposes to establish a major applied research and exploratory development facility on its Centennial Campus to build and operate two particle storage rings. One of the rings will be a 3.0 GeV electron storage ring with low vertical emittance to be used as a synchrotron radiation (SR) source with space for up to eight insertion devices. The figure shows a schematic layout of the facility.

Some of the programs which are being organized or developed include: (a) High aspect ratio microelectromechanical systems (HI-MEMS). The exciting new technology of MEMS offers the possibility of bringing the same advances to mechanical systems that have accompanied the miniaturization of electronics. Applications range from advances in drug delivery to smaller drive motors for the next generation of magnetic storage devices. (b) Environmental characterization and remediation. Advanced characterization, particularly identifying the chemical state of certain hazardous elements in dilute concentrations, becomes possible using SR. (c) Materials and chemical characterization and analysis. A host of materials characterization techniques have been developed using these machines. They represent the state of the art in analyzing many surfaces, interfaces, composites, polymers, and complex chemical systems. In addition, other areas which seem promising include spectromicroscopy in X-ray and infrared and powder diffraction. (d) Macromolecular crystallography. The improved capabilities to determine complex crystal structures offered by synchrotrons could have a major impact in developing improved pharmaceuticals, agrichemicals and food products. NC STAR is developing a team of university and industrial crystallographers to develop a comprehensive macromolecular facility which has a service component to it. (e) Medical imaging. (f) Proton therapy.

The capital investment required to develop NC STAR is substantial. It is estimated to cost $112 million for the storage rings and related equipment and about $30 million for the conventional facility. The operating budget is expected to be about $10 million per year. At the present time, the major funding initiative is through the JEDI-ALT consortium (Joint Economic Development Initiative - Advanced Light Technologies) which involves NC STAR, the Duke University Free Electron Laser Laboratory, MCNC, a not-for-profit organization with interest in developing HI-MEMS technology, and the Budker Institute of Nuclear Physics of Novosibirsk, Russia.