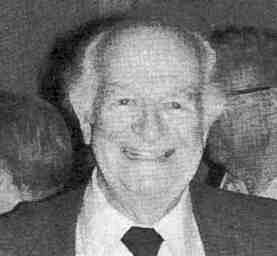 Linus Pauling will go down in history as one of the founders of modern chemistry. Most scientists create a niche for themselves, an area where they feel secure, but he had an enormously wide habitat, ranging from quantum mechanics to structural chemistry to molecular biology, apart from his activity as world crusader against misused authority, injustice, and stupidity. He was one of the first to perceive the essential unity of chemistry and biology, to see that biology, however complex and irreducible it may be in fine detail, is just chemistry plus evolution. Here I take his scientific eminence for granted and merely add a few personal recollections to the many eulogies that have appeared.

Like many others, I first encountered Pauling through his writings. During my student days at Glasgow University, I discovered "The Nature of the Chemical Bond". Pauling's book came as a revelation. He explained how the structures and energies of molecules could be discussed in terms of a few simple principles. The essential first step in understanding chemical phenomena was to establish the atomic arrangements in the substances of interest. To try to understand chemical reactivity without this information or with dubious structural information was a waste of time.

In late 1947 I found myself in Oxford when Pauling arrived there as Visiting Professor. He was a sensation. The lecture hall was too small to hold all the students who wished to attend; there was standing room only. He told those of us who had never studied electrostatics to go home and read Sir James Jeans's book on that subject before coming to his lectures on chemical bonding. I had never studied electrostatics but I stayed, spellbound. Pauling was a superb lecturer. I had never heard anyone quite like him, with his jokes, his relaxed manner, his seraphic smile, his slide-rule calculations, and his spontaneous flow of ideas.

I was then a post-doctoral research worker with Dorothy Hodgkin. Pauling was an occasional visitor. It was a tremendous surprise when he offered me a post-doctoral Fellowship at Caltech.

At Caltech I worked with V. Schomaker and K. Hedberg at the time when Pauling was thinking about the structures of polypeptide chains in proteins, and making models based on the structural regularities observed in the crystal structures of simple peptides that were then being studied in his laboratory. Pauling used to tell me occasionally about his models and what one could learn from them. As I recall, he talked about spirals. One day I mentioned that for me the word "spiral" referred to a planar curve; since his polypeptide coils were three-dimensional, they were better described as "helices," I suggested. Pauling replied, quite correctly, that in his opinion the words "spiral" and "helix" could be used almost interchangeably, but he thanked me for my suggestion because he much preferred "helix" and declared that he would always use it henceforth. A few years later we had the DNA double helix, not the DNA double spiral.