Facilities and Opportunities for X-ray Crystallography

The Duke University Free Electron Laser (FEL) Lab.  is housed in a 52,000 square foot building. Initially, there will be two FEL installations on a 1 GeV storage ring-based system. These will consist of an ultraviolet optical klystron, the OK-4 FEL currently at the Budker Institute for Nuclear Physics in Novosibirsk, Russia, which has been operated (at 350 MeV) with lasing at wavelengths as short as 2400 Å (the present short wavelength record for FELs). At Duke, the OK-4 system will have a 15-fold tuning range over and from approximately 300 Å up to 4500 Å at 1 GeV electron beam energy. In addition, a 3.7 meter hybrid undulator originally constructed by Brobeck for NIST has been installed on the storage ring for use as an intense spontaneous light source in the 40-100 Å region.

The second FEL on the ring will be a short undulator designed for the production of an intense mm wavelength source which will in turn be used as a pump in an inverse Compton scattering hard X-ray source. The inverse Compton source will yield high brightness X-ray photons at energies tunable from 2-30 keV. Inverse Compton scattering in the OK-4 based FEL will yield an intense gamma-ray source tunable from 1-250 MeV. In addition, each dipole magnet in the storage ring will produce approximately 1 KW of synchrotron radiation. The characteristics of the Duke storage ring are shown in Table 1.

The hard X-ray and γ sources are derived from synchrotron radiation at the dipole magnets and from inverse Compton scattering of the FEL photon pulse off the electron beam. Thus, inverse Compton scattering of UV/VUV light in the OK-4 FEL operating with two bunches will generate an intense semimonochromatic γ-ray beam with energy from 1 to 250 MeV. Intensity of the γ will be 100 to 1000 times higher than any presently available. Low orbit compaction factor and high average current allow the generation of very high average and peak power. Theory predicts that 4 gigawatt peak power can be generated by this method to create 1 to 30 keV inverse Compton X-rays. The coherence of the scattered X-rays will depend on the length of the mm-wave pump pulse as can be seen in the figure above. The average level of brightness achievable in the proposed Duke inverse Compton X-ray source is comparable to the most advanced source at ESRF (6 GeV, kilometer in circumference storage ring, Grenoble, France). 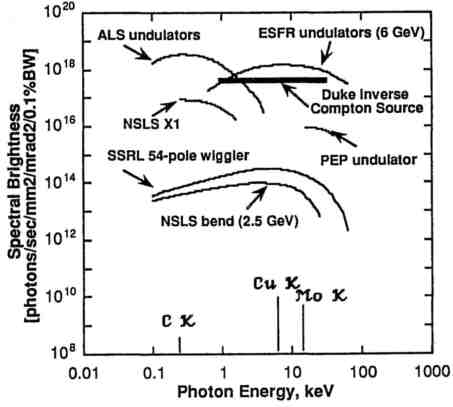 The gamma source will be obtained from the soft X-ray/vacuum ultraviolet FEL optical pulse in the OK-4 system. It will be sufficient to store 2 electron buckets in the Duke storage ring FEL (from possible 64) to initiate this process - this geometry will provide precise "head to head" collision of electrons and photons. As the result, a narrow cone (with angular divergence of 1 mrad) of energetic quanta will emerge from the ring.

Electron beam injection into the storage ring is scheduled for November, 1994. Operation of the ring at 1 GeV energy and 1 amp current is expected in 1995-1996, with the OK-4 system and gamma production at that time. The mm wave FEL for hard X-ray production will be available 1996-1997. Dipole magnet synchrotron radiation will be available in 1995. Beamline design for all sources is in the preliminary phase at this time. Further information can be obtained from K. Straub.