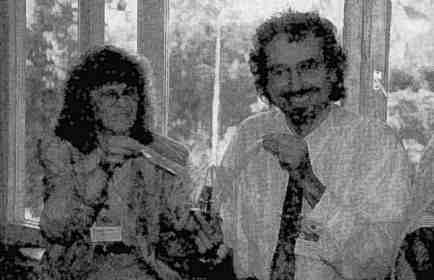 We wish to measure the intensities of "almost forbidden" reflections which arise from asphericity of the electron-density distribution, caused by bonding electrons and anharmonic thermal vibration. Because these intensities are extremely weak, the measurements are carried out using synchrotron radiation on the 4-circle diffractometer at HASYLAB (DESY) Hamburg.

Absorption and scattering of the X-rays by air cause poor peak to background ratios. When using two helium filled pipes in the incident and reflected beam, respectively, the air immediately surrounding the specimen increases background intensity. This area cannot be included in the conventional helium line because the specimen must be turned through three diffractometer axes. The two pipes also require four additional (scattering) windows in the beam. Our idea was to enclose the X-ray beam completely in helium, and dispense with the windows. 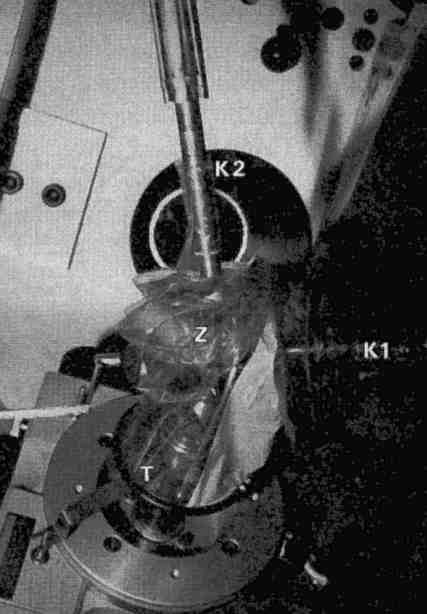 A closeup of the helium filled tent and goniometer mount.

The central unit of our construction is a bearing that allows the specimen to be turned through the phi axis  independently of a polyethylene tent covering it. The tent encloses the space between two pipes mounted in the primary beam, and in front of the scintillation counter. Standard gaskets are used to enclose the other elements of the helium line. To purge the line, helium is directed from opposite ends of the line towards the tent and vented through small holes in the tent.

Initial tests were carried out with the almost forbidden reflections (666) and (442) of a spherical Si crystal, measured at wavelengths of 0.712 Å and 1.22 Å respectively. Helium purging of the tent gives minor but significant noise reduction. The helium line caused an 11% increase in integrated intensity during the measurement of the strong (359) reflection. The background of the weak (442) reflection decreased by about 60%, the peak to background ratio rose by about 88%. Using the helium line the significant measurement of the (666) reflection takes only 10 minutes, a quarter of the time required for experiments without the line. The (666)-reflection was clearly separated from background noise for the first time. The structure factor obtained in this experiment (Fobs(666)=0.066(4)) agrees with the value predicted by MEM (F(666)=0.0732, [M. Sakata and M. Sato (1990) Acta Cryst. A46, 263-270]).