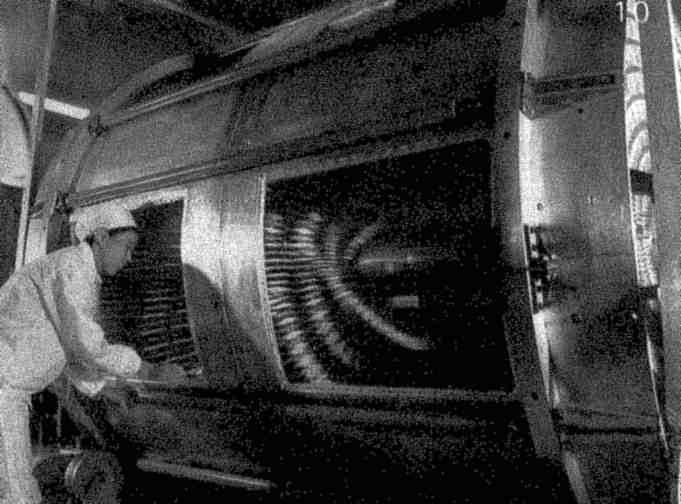 Inside the Synchrotron facility in Beijing.

The storage ring for the Beijing Synchrotron Radiation Facility (BSRF) is the 1.6-2.8 GeV Beijing Electron-Positron Collider (BEPC), which was constructed for China's first project on high-energy physics research. The storage ring operates in the colliding mode or in the dedicated synchrotron radiation mode. The beam lines at BSRF from bending magnets can be operated in the parasitic mode while the storage ring run for high-energy researches. There are 70 staff members at the Beijing Synchrotron Radiation Laboratory (BSRL), including home scientists, engineers, administrative personnel, and technicians.The present director of BSRL is T. Esheng. Usually there are four 10-15 day shifts of SR operating mode of the ring BEPC each year. Since 1991, about 50 proposals have been received annually.

Successful experiments conducted thus far include: investigation of phase transition in NdP5O14 and ferroelectric domains in KTa1-xNbxO3, observation of dislocations in Al62Cu25.5Fe12.5 icosahedral quasicrystals, structural and transition study of HgBa2Can-2Cu2n+2+ superconductors, investigation of defects in infrared detector device, mechanism and structure study of different catalysts, and the misfit dislocation of InGaAs/GaAs heterostructure. The new investigations of Sb delta doping of Si demonstrated superiority in structure analysis. From the simulation of the experiment result, it is found that only 0.26 monolayer of Sb is doped in the Si at 25.5 nm below the surface. This structure is not detectable by other experimental methods. Diffraction with laboratory X-ray sources fail to achieve detection.

There are plans to improve the BSRF, upgrading and expanding the existing facility, improving some optical elements and designs, and constructing more beam lines and experimental stations.